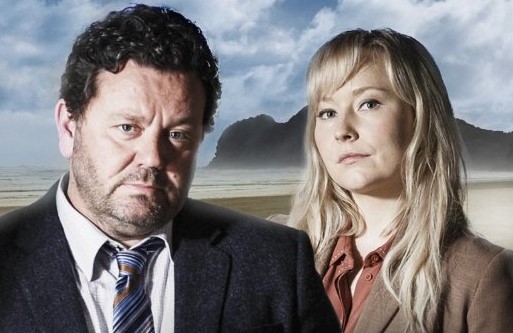 Neill Rea and Fern Sutherland are featured in The Brokenwood Mysteries.

So far eight episodes of The Brokenwood Mysteries (including this one) have appeared on YouTube, and a third four-episode skein is now shooting. The 2014-2016 TV detective drama is set in and around the fictional town of Brokenwood (pop. 5000). Tim Balme conceived the series and is lead writer. As an actor he won Kiwi awards for Mercy Peak, Braindead and Jack Brown Genius. He was a writer on lively Outrageous Fortune, The Blue Rose, and The Almighty Johnsons.

We don’t know any of the performers, but they’re quite talented. Detective Inspector Mike Shepherd (Neill Rea) is sent from Auckland to Brokenwood to assist the local police with a possible murder investigation. Brokenwood is a seemingly quiet country town, where Shepherd, who has an unconventional approach to his task, works with local Detective Constable Kristin Sims (Fern Sutherland), who is precise and efficient at her job, to solve murder mysteries. As the series progresses the working relationship between the two moves from rocky to functional as they grow to appreciate each other’s talents.

In the first episode, four seemingly close friends go hunting in the bush on a stag hunt. But the groom-to-be never comes back. He was shot through the head, and it’s not clear whether this was a hunting accident or homicide.

In subsequent episodes a famous wine critic is found dead in a fermenting vat; the local rugby coach is found naked, dead, and tied to the goal posts; a severed hand is discovered in a crayfish pot; an actor in Hamlet dies, smelling of poison; a touring musician is found electrocuted, and a golf club owner staggers toward other players, face covered in blisters, before collapsing.

In France the series averaged 3.4 million viewers. It has also been seen in Denmark, Australia, Italy. and the U.S. (Acorn TV).

Christine Tidball, writing for entertainment website Cheese on Toast rated the series “charming, without being cloying, very well-written thanks to Tim Balme and funny, but not too funny. It’s also engaging, full of twists and will keep you guessing right till the end.”

The series has generally proved popular with the public, and has rated 7.0 out of 10 by reviewers on IMDb.com. The Brokenwood Mysteries received a bronze world medal at the New York Festival’s International Television and Film Awards in 2014.