Sometimes they happen in quick succession. 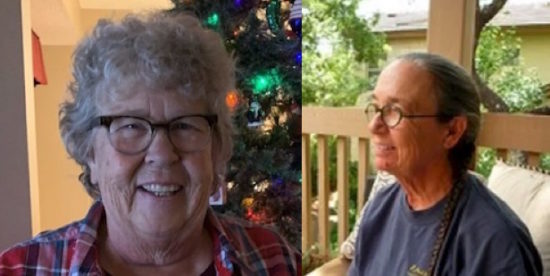 Sometimes the passages happen in such quick succession. This has been a summer of such passages with four friends and colleagues who were courageous and creative. Three of them tackled Texas homophobia and expanded LGBTQ rights with their advocacy. We lost Pat Cramer June 19, 2021 and JoAnn Mulert passed away on July 15, 2021. And Gregg Barrios died August 17, 2021. Then, on September 25, 2021, Steve Russell passed on.

Gregg Barrios was a film critic for Austin’s Rag newspaper in the early days and became an influential critic, poet, and playwright. Steve Russell was an activist in Austin in the 1970s and later served as a Texas State trial judge.

I was only able to attend two of the gatherings that celebrated their lives and honored their accomplishments. I knew the two women, Pat and JoAnn, as part of the audacious Austin women’s community that came to life in the 70s.

JoAnn Mulert came to work at Fly By Night Printing Collective in 1975. In fact, I wrote a letter to the Board of Prisons on Fly By Night stationery offering her a job. She was serving time for an act of conscience against the war in Vietnam. In Austin, JoAnn was a skillful printer and a steady presence in our raucous collective endeavor that was both Lesbian and not.

Fly By Night transitioned to Red River Women’s Press in 1977. JoAnn’s poem honoring Puerto Rican nationalist Lolita Lebrón, a woman she met in Alderson Prison, was lettered in calligraphy and adorned one of our first silkscreen posters at the press. Later in life, JoAnn began to paint watercolors and to create beautiful artwork with fused glass.

I met Pat Cramer when she was a UT shuttle bus driver
on strike for union recognition.

I met Pat Cramer when she was a UT shuttle bus driver on strike for union recognition in 1974. In 1976, I had the honor of being dragged off a stage at the LBJ Library with Pat. We were protesting CIA director William Colby’s presence and the CIA’s participation in the military coup in Chile. There is a priceless look of horror on Colby’s face as we held a banner nearby. The graphic on the banner was a puppeteer’s hand labeled “U.S.” dangling a military dictator by the strings.

Pat and JoAnn knew each other, in part because Fly By Night was located at the Bread and Roses School on San Gabriel, a movement center Pat frequented as a member of New American Movement. In 1977, after the press had moved to a location on West 12th Street, we learned that Anita Bryant was coming to Austin with her message of homophobia. We produced a poster “welcoming” Anita Bryant and calling for a Festival of Life outside her event. It was after this that Pat began to emerge as a tireless LGBTQ leader, founding the Austin Lesbian and Gay Political Caucus (ALGPC).

At the gathering to honor Pat’s life, former State Legislator Glen Maxey, the first openly gay state legislator in Texas, remembered Pat with a story. A statewide lobbying effort was being initiated in Texas, to fight discrimination against gays and lesbians. Glen addressed the group making repeated references to the gay agenda. Then the gay men went to lunch at one location in Houston while the lesbians went to another. When they returned, Pat interrupted the proceedings: “The Lesbians talked at lunch. If you ever use the word Gay again without proceeding it with Lesbian, we’ll kneecap you.” And, Glen never did again.

She probably said it without any anger in her voice.

Glen’s story got a lot of laughs, but it was pure Pat. She probably said it without any anger in her voice, just matter-of-fact determination. That determination made her an amazing activist, Travis County employee, and one of the Travis County’s most skillful allies to have in an electoral campaign. She learned those in 1982 when a housing proposition, put forward by evangelical Christians, made its way onto the local ballot. It would have allowed landlords the right to discriminate on the basis of sexual preference. With ALGPC leadership, an anti-discrimination coalition that included Latinx and Black officeholders and leaders, worked to defeat the measure. In 1989 Pat was a plaintiff in a lawsuit (Morales et al, v. State) that challenged the constitutionality of Penal Code 21.06 criminalizing “deviant sexual intercourse.”

JoAnn and Pat also knew each other through the lesbian softball circuit. The city-run softball leagues were apparently a more important meeting place than any gay or lesbian bar in ‘80s Austin culture. Many a romance, partnership, and marriage when it was possible, began on those softball fields.

One of my favorite stories at Pat’s gathering was from JoAnn’s partner who recounted Pat’s competitive Scrabble spirit. She had put down the word, “huma.” JoAnn demanded to know that it was indeed a word. “Use it in a sentence,” she said. Pat did, speaking with a Texas twang and syllabic excess, “Huma talkin’ to?” It was pure Pat again: an effervescent lover of fun.

An oral history with Pat Cramer can be found at the Briscoe Center for American History at the University of Texas at Austin. Her papers, gathered by her partner, will be housed there as well. She will long be remembered for her tireless efforts to make the world a better and more equitable place. [Oral History:

Gregg Barrios, was a San Antonio poet, playwright, filmmaker, artist, and teacher. In the words of the San Antonio Report,

The magical life of Barrios — no stranger to celebrities including [Andy] Warhol, Elvis Presley, Selena, Jane Fonda, Farrah Fawcett, and Tennessee Williams — ended Aug. 17 at age 80. He died at Metropolitan Methodist Hospital from a sudden heart attack after a routine medical procedure.

Gregg was a celebrated critic and journalist.

Gregg was a celebrated critic and journalist. He was a former book editor at the San Antonio Express-News, became a member of the Board of Directors of the National Book Critics Circle, and was inducted into the Texas Institute of Letters in 2015. He was a USC Annenberg Fellow and won a Ford Foundation Grant. His work was featured in major publications including the Los Angeles Times, The New York Times, and Texas Monthly.

In 2016, Gregg attended the second Rag Reunion, participating as a Vietnam veteran in a panel discussion on GI antiwar resistance. He was a guest on Rag Radio and an occasional contributor to The Rag Blog.

Steve Russell, former Rag staffer, contributor to The Rag Blog, and guest on Rag Radio, died September 26, 2021. It comes as no surprise that Steve wrote his own obituary. His trailblazing life history is chronicled in his recent memoir, Lighting the Fire: A Cherokee Journey from Dropout to Professor.

He took great pride in having quit school in the ninth grade.

Steve Russell, 74, died on September 26, 2021. He received his law degree and was admitted to the Texas Bar in 1975. He was admitted to practice law in the United States Supreme Court in 1979. He took great pride in having quit school in the ninth grade but, in addition to his law degree, he graduated from the University of Texas at Austin College of Education magna cum laude in 1972. He also received a Master of Judicial Studies from the University of Nevada at Reno in 1993. He was a veteran of the United States Air Force and an enrolled citizen of the Cherokee Nation of Oklahoma.

He was in private practice when we was appointed to the Austin Municipal Court in 1978, where he served until elected to the Travis County Court at Law, from which he retired in 1995. He served two terms as president of the Texas Indian Bar Association before it became the State Bar of Texas Native American Law Section. Russell served 17 years as a trial court judge in Texas.

He began a second career teaching criminal justice at the University of Texas at San Antonio and retired in 2010 as Associate Professor Emeritus from Indiana University at Bloomington. He finished six books, the last of which was his memoir, Lighting the Fire: A Cherokee Journey from Dropout to Professor. In his later years, Steve wrote for The Rag Blog and Indian Country Today and was a contributor to Newsweek.