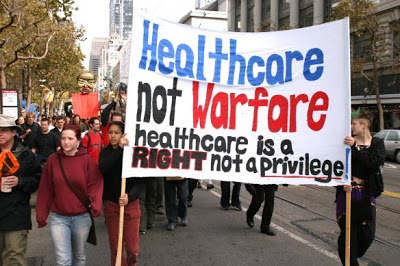 Demonstration in San Francisco. Photo from basetree.
Two cheers for health care reform efforts
But whatever happened to the peace movement?

For purposes of comparison I want to make some predictions about the outcome of two current political struggles. I predict that some kind of health care bill will pass the Congress and be grudgingly endorsed by President Obama. It will include a “public option.” I am leaving aside for purposes of this essay the question of whether it will address the fundamental health care needs of the American people.

In addition, I predict that President Obama will authorize the sending of some increment of new troops to Afghanistan, just modestly short of the request made by General McChrystal for between 40,000 to 80,000 troops. While my predictive skills are modest at best — I predict victory for my beloved Chicago Cubs every year — I want to use these predictions to compare what I see as the relative strengths and weaknesses of the health care movement and the peace movement today.

First, let us reflect on the health care movement. Despite an enormous campaign by insurance providers, drug companies, some health professionals, a vigorous and angry anti-government movement from the right, and a 24-7 news advocacy television station partnered with about 80 percent of all of talk radio which is right wing, we are on the cusp of a modest legislative victory for health care reform. What has contributed to this movement?

Two movements, one years old and one relatively new, have been working tirelessly to achieve some substantial increase in access to health care for the American people. The modern single payer movement goes back to the 1970s, inspired by legislative proposals from that time. The vision of comprehensive health care goes back 100 years.

More recently, supporters of so-called “universal health care” embedded in the electoral campaign of candidate Obama have penetrated the consciousness of the entire population. As a result of these two campaigns, almost everyone says the system is broken.

Single payer and other health care reform campaigners are working vibrantly in every state. They are critically supplemented by organized labor’s strong support for health care reform. Polling data indicates that majorities favor some reform and sizable minorities support a single payer system. Health care reform advocates lobby and are in the streets. Cultural performers devote whole musical concerts and documentary films to the subject.

In sum, the health care movement is organized, passionate, well-planned, and targets both ruling elites and the grassroots. It has had some success penetrating the barriers of class, race, and gender.

How about the peace movement?

While the health care movement has some formalized national, state, and local organization connections, the peace movement today seems in disarray. United for Peace and Justice no longer plays a national leadership role in the peace movement and no other national organization is taking its place. The most organized activities come from individual projects such as Robert Greenwald’s encouragement of communities to show his documentary “Rethink Afghanistan.”

Long-time peace activists, from the American Friends Service Committee, to CodePink, to local groups organized around opposition to wars in Iraq or Afghanistan or against Israeli policy in Palestine collaborate for specific public events. They reach out to workers, communities of color, and women’s groups but with limited success.

Mobilizations are organized around a variety of demands: no escalation in Afghanistan, bring the troops home from Iraq, cut military spending, or abolish nuclear weapons. The messages at rallies are diffuse. They do not lend themselves to specific demands, clear petitions, and criteria for evaluating the conduct of politicians.

It is also the case that the diverse peace movement has not clearly enough linked its demands to the living experience of workers, people of color, and women. As to the former, while U.S. Labor Against the War has lobbied vigorously and effectively within the labor movement, the labor movement has not been forced to play a critical role in campaigns for peace the way it has in reference to health care. “Health care not warfare” is demanded at rallies but almost as an “add-on” or afterthought to “end the war” slogans.

But if the comparisons are correct there are lessons to be learned. Peace and justice activists have to more rigorously connect the understanding and presentation of their issues — both health care and peace. Bringing a kind of structural analysis to educational work, lobbying, and street action is called for now more than ever. The lack of adequate health care, long-term unemployment, war and military spending, and global warming must be analyzed together.

These analyses require theory and political activism that is shaped by understandings of how the structures of society construct classes, races, and genders.

Finally, we can use our knowledge of history to inform our campaigns. For example, President Johnson promised the American people that he would work to create a “Great Society,’ a society that eliminated poverty. That promise was destroyed in the jungles of Vietnam.

Dr. Martin Luther King was beginning to make the theoretical and practical connections at the end of his life when he said that: “A nation that continues year after year to spend more money on military defense than on programs of social uplift is approaching spiritual death.”