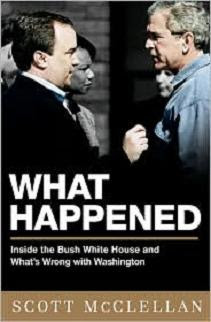 Take One: What Took You So Long?

In What Happened, Scott McClellan offers withering portraits of George Bush, Karl Rove, Condi Rice, and Scooter Libby, confirms that we went to war in Iraq under false pretenses, and that we were serially lied to about the outing of Valerie Plame.

Interesting stuff, Scott. But about five years too late.

It’s George Tenet déjà vu all over again. How many times are we going to have a key Bush administration official try to wash the blood off his hands — and add a chunk of change to his bank account — by writing a come-clean book years after the fact, pointing the finger at everyone else while painting himself as an innocent bystander to history who saw all the horrible things that were happening but, somehow, had no choice but to go along?

McClellan told the Washington Post that he wrote the book to “provide an open and honest look at how things went off course and what can be learned from it.” And he told Cox News Service, “My job was to advocate and defend [Bush’s] policies and speak on his behalf. This is an opportunity for me now to share my own views and perspective on things.”

Great. We need all the openness and honesty we can get. But it would have been a lot more helpful if he had taken the “opportunity” when it really mattered — say before the 2004 election, when it could have potentially saved thousands of lives.

Take Two: The Rationale for Iraq is Even Worse Than We Thought

McClellan really lets it rip on Iraq. He says that Bush led a sophisticated “political propaganda campaign” to sell the war, was not “open and forthright on Iraq,” managed the runup to war “in a way that almost guaranteed that the use of force would become the only feasible option,” “largely ignored or simply disregarded” contradictory intelligence on the war, and as the war went poorly responded by “never reflecting, never reconsidering, never compromising.”

McClellan’s scathing conclusion: “History appears poised to confirm what most Americans today have decided: that the decision to invade Iraq was a serious strategic blunder. No one, including me, can know with absolute certainty how the war will be viewed decades from now when we can more fully understand its impact. What I do know is that war should only be waged when necessary, and the Iraq war was not necessary.”

Perhaps the most damning revelation regarding Iraq is McClellan’s assertion that the real reason Bush wanted to invade Iraq was the “opportunity to create a legacy of greatness” by transforming the Middle East into a land of peace and brotherhood. Over 4,000 dead U.S. soldiers sacrificed for a neo-con wet dream of democratic dominoes across the region. How chilling is that?

McClellan also tosses in a pinch of Oedipal subtext: “The president had promised himself that he would accomplish what his father had failed to do by winning a second term in office. And that meant operating continually in campaign mode: never explaining, never apologizing, never retreating.”

Such is the stuff foreign policy nightmares are made of.

McClellan points an accusatory finger at the mainstream media — he calls them “enablers” and says they were too easy on the administration during the selling of the war:

“The national press corps was probably too deferential to the White House and to the administration in regard to the most important decision facing the nation during my years in Washington, the choice over whether to go to war in Iraq. The collapse of the administration’s rationales for war, which became apparent months after our invasion, should never have come as such a surprise. … In this case, the ‘liberal media’ didn’t live up to its reputation. If it had, the country would have been better served.”

Great point, Scotty. We and many others made it back in 2003.

It’s such a great point, it caused Karl Rove to act like something nefarious has happened to McClellan, transforming him from the lie-spouting sock puppet he has “known for a long time” into somebody who “sounds like a left-wing blogger.” Have anyone specific in mind, Karl?

Speaking of Rove, McClellan’s tome continues the obliteration of the Rove mystique, reminding us what an out-and-out liar Rove was and is — more than willing to assure McClellan that he wasn’t involved in the leaking of Valerie Plame’s identity when, in fact, he was up to his Turd Blossom in the sordid affair, having discussed Plame with Matt Cooper and Bob Novak in an effort to discredit Joe Wilson.

McClellan also makes it clear that the indelible, says-all-you-need-to-know-about-this-administration photo of Bush looking out the window of Air Force One during his too-busy-to-stop flyover of New Orleans in the wake of Katrina was a Rove special: “Karl was convinced we needed to do it — and the president agreed.”

Stephen Colbert satirized the Bush approach when he coined the concept of “truthiness”: the truth we want, in our gut, to exist, without regard to evidence, logic, intellectual examination, or facts.

McClellan reveals how much the joke matched the reality, saying that Bush’s “leadership style is based more on instinct than deep intellectual debate.” Citing Bush’s assertion that he honestly couldn’t remember if he’d ever done cocaine, McClellan says he felt he “was witnessing Bush convincing himself to believe something that probably was not true, and that, deep down, he knew was not true.”

But who needs reality when you have faith? Who needs truth when you have truthiness? As George Costanza put it on Seinfeld: “Jerry, just remember, it’s not a lie if you believe it.”

According to McClellan, the Secret Service code name for the White House press secretary was “Matrix.”

As any Keanu Reaves fan will tell you, the Matrix is a simulated reality used to pacify and subdue the human population in a dystopian future.

Who knew Secret Service agents have such an arch sense of humor?

On the day McClellan resigned as press secretary, Bush pictured a time down the road when he and his former aide would “be rocking on chairs in Texas, talking about the good old days and his time as the press secretary. And I can assure you, I will feel the same way then that I feel now, that I can say to Scott, ‘Job well done.'”

Maybe not. Although, since, according to McClellan, Bush “has a way of falling back on the hazy memory to protect himself from potential political embarrassment,” who knows?

I can already see the blurb on the back of the paperback edition of What Happened: “Heckuva job, Scotty!” – George W. Bush, 43rd president of the United States

And go here to read the Politico.com exclusive that broke the story and to watch a video with Keith Olbermann and Rachel Maddow. / The Rag Blog