Friggin’ Shake Your Buns Out !!

Well, this was an interesting contribution from one of our Friends. Morality Rock is a Web site all about who George Bush really is. And let’s be clear, it’s scary! 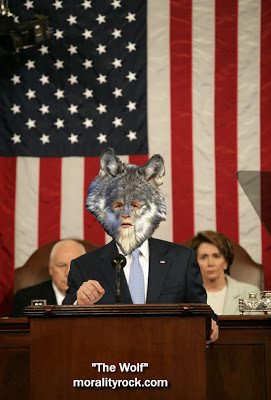 Morality Rock didn’t get its start in anyone’s garage, or in the Seattle club scene. It got its start in my unassuming and unhip office, where my small desk is cluttered with a variety of computers, peripherals, compact disks, and technical manuals. Morality Rock evolved quite by accident from an experiment with speech recognition software, which dictates computer users’ spoken words, converting them instantly into text on the screen.

I had been testing a new speech recognition product and inadvertently left my computer on overnight. When I arrived at work the next morning, I was shocked to find that my computer, in a presumably silent office, had produced a poem:

When The Idaho
over the foot
of the oversight
on 80000

the Old
the In
the End
of the Human

The last stanza was particularly chilling, coming from a computer. Needing answers, I frantically asked co-workers, the sanitation crew, and building security if anyone could possibly have been in my office that night. The unanimous answer: No. This led to my belief that my computer was tapping into a deeper reality. Whether these were the voices of ghosts, or far away voices imperceptible to human hearing, my computer was listening, and was recording every word. Perhaps I should briefly describe how speech recognition works. When someone (i.e., user, distant unassuming bystander, or ghost) speaks, my computer receives the signal through a microphone, then translates the incoming auditory signal into binary code. If the signal is distorted (for example, if there’s background noise), my computer activates her noise filtration algorithms so she can focus her perception entirely on the speaker to whom she’s listening. She then matches the result against the information stored in her vast language database, and does so in a fraction of the time required for comparable processing by the human brain. With a speech processing system this advanced, my computer is far better at ascertaining the contents of a spoken message than I am.

Since that night, I have questioned the reality that I had previously accepted at face value. If the room I’m in seems to be silent, is it truly silent? When you speak to me, do I hear and understand you correctly? When the President speaks, am I hearing the truth? Given my newfound distrust of all words previously trusted, the latter question particularly troubled me. What if we were being subtly, subliminally deceived by our government? What if the actual words of George W. Bush were different than those we perceived? I had to know the truth.

So one by one I fed to my computer the recorded audio from each of the President’s speeches, and watched as the words filled my computer’s screen, words like these:

From President Bush’s First Radio Address to the Nation

From President Bush’s Unveiling of his New Energy Policy

Many others, we are the land color hydropower in the year. And other energy shortages are mental pollution in all the hard-hit night.

Loyalist vanity is the land of the late in half, and miles away from the real impact of reservoir and ankle. In Arctic, I like and warmed Millrose. I can literally melt away with a kind, and is going to protect wildlife.

Read all about this here.

This entry was posted in RagBlog and tagged Bush, Humor. Bookmark the permalink.