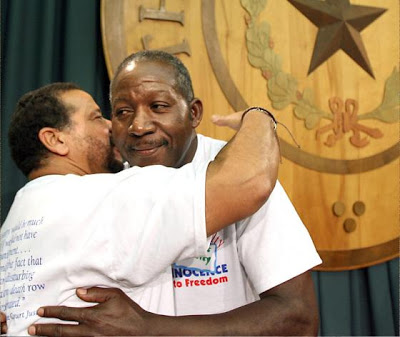 Twenty men exonerated by DNA evidence all gathered in Austin on Friday to call for a moratorium on Texas’ death penalty in light of the state’s recent slew of long-time inmates proven innocent by applying modern forensics to old evidence, including most recently the exoneration by DNA of Michael Blair who’d been sitting on Texas’ death row. Reported the Austin American-Statesman:

The exonerated men, members of Witness to Innocence, a Philadelphia-based organization that is holding its annual meeting in Austin, want Texas to create a commission to search for wrongful convictions. And while the commission works, they want a moratorium on executions in the busiest death penalty state — with 419 executions since 1982 and six more scheduled this month. …

Sam Millsap, former Bexar County district attorney, said he slowly came to believe that the death penalty must be abolished because of the growing number of exonerated death row inmates — 130 since 1973, including nine in Texas, according to the Death Penalty Information Center. “I am no longer convinced that our courts will in fact guarantee the protection of the innocent,” Millsap said.

Millsap said he has taken responsibility for the 1993 execution of Ruben Cantu , a San Antonio man who Millsap said might have been innocent of a 1984 murder. The conviction was based on one eyewitness who later recanted, and no physical evidence tied Cantu to the crime, he said. “My decision to seek the death penalty was a mistake.”

The most recent Texas exoneration was in September , when a Collin County court dismissed the capital murder case against Michael Blair , sentenced to die for the 1993 murder of 7-year-old Ashley Estell.

However, the reporter (perhaps rightly) warned the exonerees:

any bill to halt executions stands no chance of passing the Texas Legislature, [Austin state Representative Elliott] Naishtat said. Capital punishment has substantial support in Texas. The 2007 Texas Crime Poll by Sam Houston State University found 74 percent of Texans support the death penalty. And 66 percent said they were confident that innocent people are protected from execution.

The Houston Chronicle published a story commemorating the 20th anniversary of a Harris County case that launched the international boom in the use of DNA in forensic science and interviewing Dr. Tom Caskey, whose patents on the early technology still fund research positions at the Baylor College of Medicine:

“Don’t ever say crime doesn’t pay. Crime does pay,” quipped Caskey, who now directs the Brown Foundation Institute of Molecular Medicine for the Prevention of Human Diseases, a part of the University of Texas Health Science Center at Houston.

Caskey’s primary scientific interest at the time involved the identification of genes linked to human disease. But, during the course of his research, he identified short segments of DNA — called short tandem repeats, or STRs — that vary widely from person to person.

His lab developed an STR identification technique that soon became the gold standard for criminal cases.

The method underlies the U.S. Combined DNA Index System, or CODIS, which contains DNA information on more than 6 million offenders. The system also forms the basis of Interpol’s criminal database and that of most governments.

A constitutional right to DNA testing?

The US Supreme Court will soon decide whether a federal right exists to have DNA evidence tested that could prove a long-ago convicted defendant’s innocence, even if he confessed to the crime:

William Osborne was accused of raping a prostitute at gunpoint, beating her with an ax handle and leaving her for dead in the snow. His lawyer declined a DNA test of the evidence, thinking that it would confirm his guilt.

Osborne was convicted, spent more than a decade in prison and gave a detailed confession to a parole board. But after recanting that confession, the Alaska man won a federal lawsuit seeking new DNA tests that he now says can clear him, a judgment that was affirmed by the U.S. Court of Appeals for the 9th Circuit. It is the first time an appellate court has ruled that an inmate has a federal constitutional right to such testing.

Now, the Supreme Court is being asked to evaluate that ruling in a case that pits the administration of Alaska Gov. Sarah Palin, the Republican vice presidential nominee, against a Republican-appointed judge who accuses her state attorney general of being “obstinate” in blocking Osborne from getting to test the evidence used to convict him. The high court debated Alaska’s request to take the case in a private conference on Friday and could announce its decision as early as today.

Finally, if you’re not yet familiar with the concept of “touch DNA,” be sure to check out this piece from the back pages of Scientific American which answers the question:

The touch DNA method—named for the fact that it analyzes skin cells left behind when assailants touch victims, weapons or something else at a crime scene—has been around for the last five years. In fact, the prosecutor in the Ramsey case, Boulder County District Attorney Mary Lacy, learned about touch DNA when she attended a course here at the West Virginia University Forensic Science Initiative in the summer of 2007.

The technique has dramatically increased the number of items of evidence that can be used for DNA detection. In the 1980s, in order to perform DNA analysis on a crime scene or victim, forensic investigators needed a blood or semen stain about the size of a quarter. The sample size fell in the 1990s to the size of a dime and then became: “If you can see it, you can analyze it.”

Touch DNA doesn’t require you to see anything, or any blood or semen at all. It only requires seven or eight cells from the outermost layer of our skin.

Here’s how it works: Investigators recover cells from the scene, then use a process called polymerase chain reaction (PCR) to make lots of copies of the genes. Next, scientists mix in fluorescent compounds that attach themselves to 13 specific locations on the DNA and give a highly specific genetic portrait of that person. The whole process takes a few days, and forensic labs are often backed up analyzing data from other cases.

The advent of “touch DNA” … threatened to overwhelm agencies’ storage capacity. Potentially lots of new items could be stored for touch-DNA testing, even though labs already have tremendous backlogs. That means long lag times during which the evidence must be securely stored despite limited space.

Texas’ DNA labs right now are backed up and understaffed, but the trend will be for their caseloads to dramatically expand in the near term as these techniques become more widely used (especially considering the range of possible uses to which it could be subjected). For these reasons, ironically, demand for DNA lab services will inevitably increase regardless of whether crime rates go up or down.

Forensic science errors and the introduction of junk science as evidence are responsible for up to a quarter of false convictions among Texas DNA exonerees. The focus on DNA forensics in Texas has been to bring existing labs up to snuff quality-wise, but nobody’s planning pro-actively, to my knowledge, how the state will make the labs independent, much less eliminate current backlogs, or meet the inevitable, expanded future demand for forensic capacity.

The advent of touch DNA is an amazing and wonderful thing evidence-wise, but it exacerbates an already problematic situation with regard to lab backlogs and DNA-related forensic errors.