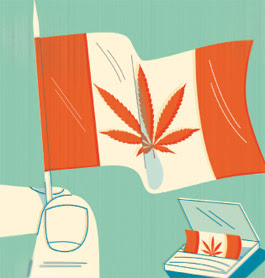 As we walk into John’s basement, the smell is so overwhelming it almost knocks me off my feet.

In front of me stand 120 marijuana plants whose thick bushy leaves cover the strong stems.

John explains quite nonchalantly that this is just a small growing operation, or grow-ops as they are known throughout Canada.

But he pays loving attention to the crop – adjusting temperature, light and nutrient supply – to ensure that it enjoys the best possible environment.

Inspector Brian Cantera of the Royal Canadian Mounted Police (RCMP) in Vancouver believes that John’s small grow-op is one of 20,000 to be found in residential houses around the province.

That figure excludes the larger grow-ops in industrial locations, not to mention the huge dope farms that are scattered around British Columbia’s vast interior.

If Inspector Cantera’s estimates are accurate, then British Columbia is probably home to the largest concentration of organised criminal syndicates in the world.

The striking aspect of BC’s marijuana trade is that it has gone beyond the boundaries of traditional organised crime groups (although some are still heavily involved) and entered into the middle classes.

Much of the revenue derived from BC Bud, as the cannabis crop is known, goes on paying college fees, perhaps buying a second car or making that holiday to the Caribbean just a little bit more affordable.

The trade is so large that the police in BC are faced with an impossible task.

Inspector Cantera walked me around a cavernous warehouse somewhere east of Vancouver where the RCMP lock up goods confiscated from people involved in the drugs trade.

The most spectacular items are the cars, speedboats and even helicopters which the traffickers use to send the marijuana down to its biggest market across the 49th parallel in the US.

These busts net goods worth millions of dollars but it still isn’t enough to dent the extraordinary profits of the drug runners.

Not surprisingly, BC’s drug culture is very controversial both inside Canada and over the border in the US.

Many Canadians believe that the widespread use of marijuana is having a devastating impact on young people in particular.

Billy Weselowski and his wife Kim have devoted themselves to helping vulnerable women caught up in drug and alcohol addiction to restart their lives.

Billy rails against those Canadians who are demanding the legalisation of marijuana.

“I’ve dealt with at least 20,000 addicts, and easily 10,000 will tell you they’ve relapsed on marijuana…That’s the underbelly of what marijuana (is) about – what it’s doing to people. And it’s like alcohol – it runs an industry.”

But the marijuana growers have equally passionate supporters like Michelle Rainey who has the legal right to cultivate a limited amount of marijuana for medicinal purposes.

It is the only non-addictive narcotic which helps relieve the pain inflicted by the debilitating Crohn’s disease from which she suffers.

But she is sought by the US to face charges of conspiracy and money-laundering because of a legal Vancouver-based marijuana seed business with which she was previously involved.

Over the past decade, Canada has been moving slowly towards a more benign regime of toleration towards marijuana (although the current minority federal government of Stephen Harper vehemently opposes this development).

This has placed the trade in the middle of some intense arguments between Canada (and BC in particular) on the one hand and the US and its guardian on drugs orthodoxy, the Office of National Drug Control Policy, on the other.

If BC’s marijuana trade ever did force through a change in the legal status of the drug in Canada, the implications for Canadian-US relations would be profound. This will be a crime story well worth watching.

[Misha Glenny is the author of McMafia: Crime without frontiers.]