They found dope in Dick’s Store and then they took down Hippie Hill. 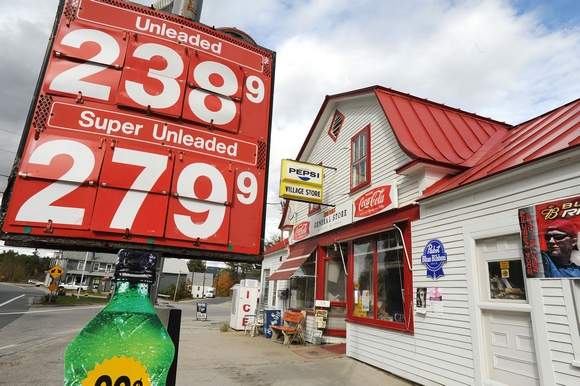 As far as I know Hippie Hill had never really bothered many of the local townspeople. All that changed last year…

HIPPIE HILL, NH — The town of Danbury, New Hampshire, where I live, is also home to a local landmark known as Hippie Hill. Of course, this being New Hampshire, we have to remember that here the term “hippie” does not connote any particular point of view regarding war, peace, ecology, racial equality or women’s liberation. What hippie means in NH is long hair and a predilection for the consumption of large quantities of marijuana (and beer).

In many ways hippie is the same as biker (motorcyclist) in New Hampshire. So it is at Hippie Hill where local bikers and others who like to ride their motorcycles (without noise restricting mufflers) on Rte 4 congregate in downtown Danbury to throw horseshoes, drink beer and defiantly smoke (mostly homegrown) pot on a little knoll (railroad embankment) across the road from Dick’s Store.

Dick (Gness) has been a local fixture for years in town and he acts as unofficial manager of all things Hippie Hill, as far as anything is ever managed there. He sells the T shirts with the Hippie Hill logo on them for example. Dick is a serious curmudgeon and his store is part grocery (beer/gas/tobacco), but also part bank for social outsiders and part food museum. I can say from experience that he sells the best Cabot cheese outside of the state of Vermont, but stay away from the dried meat products in his display case.

To say that actually visiting Hippie HIll is a disappointment would be an understatement. Not really a hill at all, just the old railroad siding with a couple of picnic tables and a horseshoe pit. The hippies (like some horseshoes) also fall somewhat short of the mark.

My favorite (made up) Hippie Hill quote is: “Peace and Love, wanna fight?” — which kind of captures the spirit. None the less, Hippie Hill represents an on-going social protest that has been running for over thirty years, a defiant demonstration in favor of public beer drinking, marijuana cultivation, smoking and a host of other USA male identity issues.

As far as I know Hippie Hill has never really bothered many of the local townspeople. Obviously there are some enforcement codes being ignored, but all in all, given the demographic realities at hand, it is probably a good way for the local riff raff to let off some steam (playing horseshoes) without hurting anyone.

Every few years a biker has managed to injure or kill himself trying to do a fancy drunken burnout, but mostly the town has been okay with Hippie Hill. After all, they always had Dick Gness to look after the flock.

Taking one look at the congregation mingling by the side of Route 4, he was quoted as saying: “I’m going to shut that down.” The summer passed and no actions were taken. Folks assumed the heat was off and New Hampshire’s longest running unofficial marijuana legalization protest could continue. They were wrong. 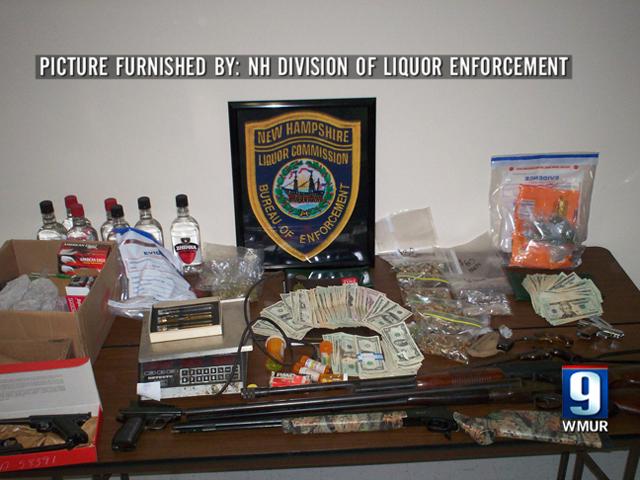 Dispatches From the Front

The man who made Hippie Hill happen got busted Sunday. After a “routine” inspection by the State Alcohol (beer) authority on Saturday the State Police and other local authorities swooped down on Dick’s Store at the crossroads in downtown Danbury, New Hampshire.

Readers might remember that Dick’s business (gas/beer/tobacco) is also the main support system behind Hippie Hill. Beyond that Dick Gness is also a general benefactor in the town. Got a check but no bank account? Lots of people in town fit that category. No problem. If Dick knows you (and he knows everybody) your check is as good as gold.

No problem with credit until the end of the week either. Just remember where to buy your beer. And don’t stick it to the man unless you want your picture on his Wall of Shame. Dick’s Store also gives lots of people in town a place to go. Not just the so called hippies on Hippie Hill. Local loners (like me), young kids on bicycles who might otherwise be getting into trouble, folks who need to talk something out. Dick does it all.

And a lot more it would seem unless this bust was a total fraud. The items “discovered” in Dick’s Store included: bags of marijuana (for distribution?), psilocybin mushrooms, a quantity of cocaine, some pints of vodka, some guns and a bunch of cash. Of course if you are running a small bank and credit operation, you’re going to need some cash. And you probably are going to need a gun or two.

If you are 71 years old (like Dick Gness) you’re probably going to need some ounces of marijuana as well. For strictly medicinal purposes. As for the rest of the material supposedly found at Dick’s Store I wouldn’t have a guess. In the four and a half years I have lived in Danbury I have never once (not even at the dump) heard talk of Dick being a drug dealer. The protector and patron of the Hippie Hill crowd. Absolutely. Beyond that? Nothing.

Except for the alleged threat made by the New Hampshire State Policeman who moved into Danbury last year. The threat to “shut down Hippie Hill.” If they’d really wanted to do that, no better way than to take out kindly old Dick from Dick’s Store.

Dick Gness of Dick’s Store in Danbury, New Hampshire, was released on his own recognizance and $1500 bail after his arrest on drug charges Sunday. Tuesday is
the day Dick’s is usually closed during the day so the town awaited in anticipation to see if the store would open at 4 p.m. as usual.

All during the day two of the diehard longhaired Hippie Hill contingent sat on one of the picnic tables huddled against the fall chills. By late afternoon (4:30 p.m.) when we got back to town it was obvious Dick’s Store had reopened as usual. More than a few cars trucks and bikes (motorcycles) were parked around in front of the sign prominently advertising Ruggles Mine and the lights were all on.

A few hundred feet away two State Police cruisers sat directly in the intersection of Rte 104 and Rte 4, all lit up. The two troopers, one of whom is the officer who lives in town who’d vowed to “shut down Hippie Hill” stood outside their vehicles scrutinizing everyone who drove through town. I don’t know if anything ever happened last night, but the situation did not look good.

It sort of reminded me of the days of the NYC Tompkins Square Riot in 1988, another police provoked, totally avoidable incident. It looks like Hippie Hill in Danbury, New Hampshire, may have to go the way of the old Tompkins Square bandshell and the Garden of Eden in the Lower East Side.

Comments posted after the arrest article in the right wing Manchester Union Leader newspaper were about 50/50 pro- and anti-Dick. Some people commended the store owner for his generosity to many local people over the years. Others commended the State Police for having terminated an illegal activity that the Danbury Police Chief had refused to address (Hippie Hill). Welcome to New Hampshire.

Welcome to the USA.

Dick’s only comment so far was to the Union Leader: “Lies, all lies.”

Letters of support for Dick Gness and Hippie Hill can be sent to:

But first a word from our sponsors. Folks following the Dick’s Store / Hippie Hill controversy know that Dick Gness, owner of Dick’s Store and all around patron of Hippie Hill, was arrested after a routine State inspection revealed evidence of marijuana in the store.

Driving through town on Tuesday at dusk Danbury resembled a battle zone. Dick’s Store supporters on one side of the intersection and State Police cruisers on the other. As we drove through a trooper wrote down our license number. Is this still America? I heard that the Hippie Hill hangers out stayed until the police left, way after dark, afraid to get into their vehicles after drinking.

The next day we were driving back through town and decided to put some air in the tires. The only free air pump I know of is at Dick’s Store. Filling up the tire I was somewhat taken back to see Dick pop out of the store as happy and pleasant as ever. I mentioned to him that I was surprised to see the store scale, the one he uses to weigh out cheese, in the drug paraphernalia picture in the paper. He laughed.

Inside, paying for the gas I decided to ask him point blank. “That really wasn’t your stuff they hauled out of here was it?” He looked down for a second and said: “It was here but it wasn’t mine.” Suddenly it all made sense. “You were holding it for a debt, right? Just like the firearms?” He nodded. “Your problem is that you’re too nice a guy, Dick…” He agreed.

So now you know. Acting as a local bank Dick Gness got into trouble trying to help people out. It never made sense that he would be a heavy user or big time dealer. The State Police are asking people to volunteer information, an obvious admission that they don’t have much of a case against Dick as a dealer.

Of course the State will take away his licenses to sell beer, cigarettes, to dispense hunting and fishing permits. The town will lose its source for the cheapest gas and beer and of course all those people who have identity problems will have no friendly unofficial bank or place to hang out anymore.

15 Responses to Carl R. Hultberg :
How They Busted Hippie Hill