Here’s a little more of that blessed change from the Obama administration. The more things change, the more they look the same. 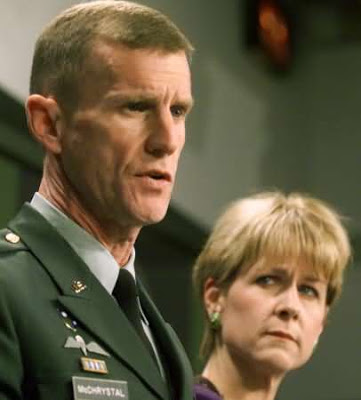 Seymour Hersh says that Dick Cheney headed a secret assassination wing and the head of the wing has just been named as the new commander in Afghanistan.

In an interview with GulfNews on May 12, 2009 Pulitzer prize-winning American investigative journalist, Seymour Hersh, said that there is a special unit called the Joint Special Operations Command (JSOC) that does high-value targeting of men that are known to be involved in anti-American activities, or are believed to be planning such activities.

According to Hersh, the Joint Special Operations Command (JSOC) was headed by former US vice president Dick Cheney and the former head of JSOC, Lieutenant General Stanley McChrystal who has just been named the new commander in charge of the war in Afghanistan.

McChrystal, a West Pointer who became a Green Beret not long after graduation, following a stint as a platoon leader in the 82nd Airborne Division, is currently director of Staff at the Pentagon, the executive to Joint staff to the Joint Chiefs of Staff.

Most of what General McChrystal has done over a 33-year career remains classified, including service between 2003 and 2008 as commander of the Joint Special Operations Command, an elite unit so clandestine that the Pentagon for years refused to acknowledge its existence.

On July 22, 2006, Human Rights Watch issued a report titled “No blood, no foul” about American torture practices at three facilities in Iraq. One of them was Camp Nama, which was operated by the Joint Special Operations Command (JSOC), under the direction of then Major General Stanley McChrystal.

McChrystal was officially based at Fort Bragg in North Carolina, but he was a frequent visitor to Camp Nama and other Special Forces bases in Iraq and Afghanistan where forces under his command were based.

An interrogator at Camp Nama known as Jeff described locking prisoners in shipping containers for 24 hours at a time in extreme heat; exposing them to extreme cold with periodic soaking in cold water; bombardment with bright lights and loud music; sleep deprivation; and severe beatings.

When he and other interrogators went to the colonel in charge and expressed concern that this kind of treatment was not legal, and that they might be investigated by the military’s Criminal Investigation Division or the International Committee of the Red Cross, the colonel told them he had “this directly from General McChrystal and the Pentagon that there’s no way that the Red Cross could get in.”

In the July 2, 2006 report, When Human Rights Watch asked whether the interrogator knew whether the colonel was receiving orders or pressures to use the abusive tactics, Jeff said that his understanding was that there was some form of pressure to use aggressive techniques coming from higher up the chain of command; however neither he nor other interrogators were briefed on the particular source.

“We really didn’t know too much about it. We knew that we were only like a few steps away in the chain of command from the Pentagon, but it was a little unclear, especially to the interrogators who weren’t really part of that task force.”

The interrogator said that he did see Gen. Stanley McChrystal, commander of US Joint Special Operations forces in Iraq, visiting the Nama facility on several occasions. “I saw him a couple of times. I know what he looks like.”

The International Committee of the Red Cross (ICRC) is the international body charged under international law with monitoring compliance with the Geneva Conventions, and it, therefore, has the right to inspect all facilities where people are detained in a country that is at war or under military occupation.

To hide prisoners or facilities from the ICRC or to deny access to them is a serious war crime. But many US prisons in Iraq have held “ghost” prisoners whose imprisonment has not been reported to the ICRC, and these “ghosts” have usually been precisely the ones subjected to the worst torture. Camp Nama, run by McChrystal’s JSOC, was an entire “ghost” facility.

The decision by Obama’s administration to appoint General McChrystal as the new commander in charge of the war in Afghanistan and retaining the military commission for the US war-on-terror detainees held in the Guantanamo Bay prison are the latest examples of the new US administration walking in Bush’s foot steps with regards to torture and denial of habeas corpus.

Caught in a Lie: US is Using White Phosphorus in Afghanistan as a Weapon
By Dave Lindorff / May 16, 2009

When doctors started reporting that some of the victims of the US bombing of several villages in Farah Province last week—an attack that left between 117 and 147 civilians dead, most of them women and children—were turning up with deep, sharp burns on their body that “looked like” they’d been caused by white phosphorus, the US military was quick to deny responsibility.

US officials—who initially denied that the US had even bombed any civilians in Farah despite overwhelming evidence to the contrary, including massive craters where houses had once stood—insisted that “no white phosphorus” was used in the attacks on several villages in Farah.

Official military policy on the use of white phosphorus is to only use the high-intensity, self-igniting material as a smoke screen during battles or to illuminate targets, not as a weapon against human beings—even enemy troops.

Now that policy, and the military’s blanket denial that phosphorus was used in Farah, have to be challenged, thanks to a recent report filed from a remote area of Afghanistan by a New York Times reporter.

C.J. Chivers, writing in the May 14 edition of the NY Times, in an article headlined “Korangal Memo: In Bleak Afghan Outpost, Troops Slog On,” wrote of how an embattled US Army unit in the Korangal Valley of Afghanistan, had come under attack following a morning memorial service for one of its members, Pfc. Richard Demeter, who had been killed the day before by a mine.

“After the ceremony, the violence resumed. The soldiers detected a Taliban spotter on a ridge, which was pounded by mortars and then white phosphorus rounds from a 155 millimeter howitzer.

“What did the insurgents do? When the smoldering subsided, they attacked from exactly the same spot, shelling the outpost with 30-millimeter grenades and putting the soldiers on notice that the last display of firepower had little effect. The Americans escalated. An A-10 aircraft made several gun runs, then dropped a 500-pound bomb.”

It is clear from this passage that the military’s use of the phosphorus shells had not been for the officially sanctioned purpose of providing cover. The soldiers had no intention of climbing that hill to attack the spotter on the ridge themselves. They were trying to destroy him with shells and bombs. In fact, the last thing they would have wanted to do was provide the enemy spotter with a smoke cover, which would have helped him escape, and which also would have hidden him from the A-10 ground attack planes which had been called in to make gun runs at his position. Nor was this a case of illuminating the target. The incident, as Chivers reports, took place in broad daylight.

Clearly then, this article demonstrates that it is routine for US soldiers to call in phosphorus rounds to attack enemy soldiers, which is supposed to be against US military policy for this material. Whoever was manning the howitzer had a stock of the weapons on hand, and was ready to fire them.

The US initially flatly denied using white phosphorus weapons in Iraq, when reports first began to come out, including from US troops themselves, that they had been used extensively against insurgents defending the city of Fallujah against US Marines in November 2004. Under mounting pressure, the Pentagon first admitted that it had used the chemical in Fallujah but only “for illumination.” Later, the Pentagon added that it had used phosphorus as a “screen” to hide troops. But finally, in 2005, the Pentagon was forced to admit that it had also used white phosphorus directly as a weapon against enemy Iraqi troops in the assault on Fallujah, a city of 300,000 that still held many civilians.

The same pattern of denial and eventual admission regarding the use of this controversial and deadly weapon by US forces now seems to be repeating itself in Afghanistan.

It is odd that given the controversy over the use of white phosphorus weapons, which result in terrible wounds and eventual death as phosphorus particles burn their way down through flesh to the bone and sometimes straight onward through a body, leaving a charred channel of destruction, the New York Times’ Chivers—or more likely his editors back in New York?—ignored any mention of the issue while reporting on the use of the chemical rounds to attack a lone spotter on the ridge.

Given the current controversy over whether the US used white phosphorus shells or bombs in Falah Province only days before, it is hard to understand why the issue wasn’t mentioned in this particular article. Indeed, in the online version of the story, the word phosphorus is set as a hotlink to an article on the controversy over the battlefield use of phosphorus, indicating that at least someone at the Times has integrity and a good news sense.

As for the US government and the Pentagon, it is clear that they know the weapon is a vicious and controversial one, and that besides causing horrific and painful wounds, it is profoundly dangerous for innocent civilians, particularly when used in town or village settings.

It is bad enough that the US is using this weapon. It is even worse that it is forced to lie about it.

Surely if the goal of US policy is to win the hearts and minds of Afghanistan’s people, it shouldn’t be using a weapon that causes such terrible and indiscriminate wounds. Then again, maybe winning those hearts and minds isn’t really the goal. Maybe, as in the so-called “Pacification Program” applied by US forces in rural South Vietnam, the goal is to terrorize Afghan villagers in Taliban-dominated regions into rejecting the Taliban in their midst.

Requests for answers from the press office at the Pentagon, and at military headquarters in Afghanistan, regarding US policy on the use of white phosphorus, and on the specific use of the shells mentioned in the New York Times article were ignored.

[Dave Lindorff is a Philadelphia-based journalist and columnist. He is author of Marketplace Medicine: The Rise of the For-Profit Hospital Chains (BantamBooks, 1992), and his latest book “The Case for Impeachment” (St. Martin’s Press, 2006). His work is available at www.thiscantbehappening.net.]