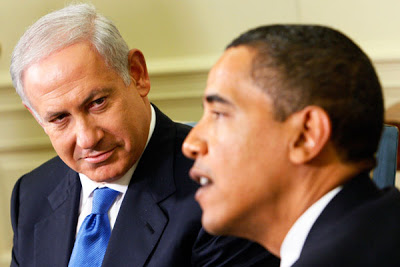 Israeli Prime Minister Benjamin Netanyahu seems like he’s trying to get a fix on President Obama as he speaks to reporters at the White House, Monday, May 18, 2009. Photo by Chester Dharapak / AP.

It is logical that as time passes, Obama’s famed pragmatism will lead him to support more progressive alternatives as his attempts to revive the corpses littering the corporate capitalist landscape fail.

As much as I trash him for his bankcentric economic policy, failure to move U.S. foreign policy away from militarism, failure to champion single-payer health care, failure to prosecute Bush era corruption, etc, I have to give Obama some credit for a decent start to his week.

On Sunday, he went to the highly publicized graduation speech at Notre Dame. To a largely rapturous audience, he brilliantly redefined the issue on his own terms while reaching out to a “common ground.” This demonstrated that Obama’s views are very likely more popular among Catholics than those of the Catholic hierarchy. It further defused the issue of abortion as a major factor in national politics. His Supreme Court nominee, very likely the Court’s second woman, will strongly support Roe v. Wade as established law.

On Monday, Obama met with Bibi Netanyahu, the rightist Israeli prime minister. They met for an hour longer than scheduled. There was no joint statement. At the post meeting press conference, Obama repeatedly referred to a Palestinian state. Netanyahu never used the term. These are not signs of harmony. Essentially, daylight opened between U.S. and Israeli policy. They have officially diverged. That was an essential first step.

They disagreed that problems with Iran should take precedence over Palestinian statehood and should include military action. Polls show Obama’s base, including Jews, strongly supporting a policy that would put more pressure on Israel, so his next likely step is to criticize the expansion of Israeli settlements on the West Bank while encouraging diplomatic contacts with Iran.. I expect to hear no more references to the Axis of Evil coming from the Obama administration.

On Tuesday, Obama raised the auto emission standards to correspond to the “radical” California standards. One might quibble with the time frame, but it is a stark reversal of Bush administration policy and one that ought to have significant positive environmental and economic consequences since it was being praised from the Sierra Club to the GM boardroom, where now the U.S. government and the UAW are the majority owners.

Not a bad start to the week for a president of the United States.

The president has become a middle path issue, a balancing act between denunciations and support. It is logical that as time passes, Obama’s famed pragmatism will lead him to support more progressive alternatives as his attempts to revive the corpses littering the corporate capitalist landscape fail.

Regardless, I sense that more than ever, what “the Left” thinks matters and our access and influence will grow.

This entry was posted in Rag Bloggers and tagged Barack Obama, Netanyahu, Progressives. Bookmark the permalink.