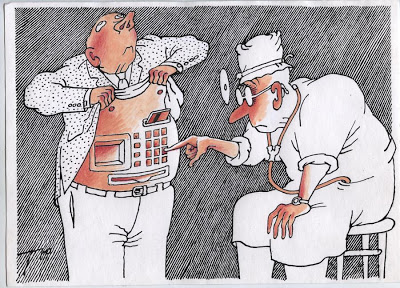 As I look at the health care situation in this country, I am reminded of the Peter Sellers movie, The Mouse That Roared.

We have Physicians for a National Health Program and Healthcare-NOW! aligned against the wealthy corporations, associations, and professional societies — who control the media, that in turn feeds distorted information to the American public– while at the same time holding hostage our elected representatives.

Granted there are a few bits of encouraging news such as the Sanders/McDermott single payer bills being introduced in Congress, the ongoing progress of single payer legislation in Vermont, and a single payer health care bill passing the health committee in the California Senate.

In Maggie Mahar’s powerful book, Money Driven Medicine: The Real Reason Health Care Costs So Much — which I would strongly advise all single payer advocates to purchase and read – there is a thought-provoking paragraph in her last chapter:

But what the consumer movement seems to ignore is that before patients can reclaim their rightful place in the center — and indeed as the raison d’etre — of our health care system, we must once again empower doctors. Physicians must be free to practice patient-centered medicine — based not on corporate imperatives, doctors’ druthers, or even patients’ demands, but on what scientific evidence suggests would be in the best interests of the patient. In other words, society needs to recognize doctors as professionals.

We are very, very far from that ideal. The doctor-patient relationship has been destroyed in the financial interest of the health insurance industry, the pharmaceutical industry, the hospital associations, the nursing home cartels, the medical equipment industry, and all those collateral institutions that bleed away the health care resources from the American people.

A major aspect of the problem, and one that appears only rarely on the public radar, is the terrible cost that comes from medical errors. This discussed in detail in the Public Citizen Health Letter of March 2011:

Preventable medical errors hurt millions of Americans every year. Many suffer unspeakable pain, become disabled, lose their livelihoods, sometimes even lose their lives, because of these medical errors. Two hundred and fifty thousand Americans die each year due to these errors, and close to 900,000 deaths in total per year come as a result of unnecessary surgery, hospital-acquired infections, adverse drug reactions, medical errors, even bedsores. From adverse drug reactions alone, the number of deaths was 420,000 in 1997 as reported by Dr. Lucien Leape of Harvard.

If this isn’t a crisis, I don’t know what is. The pain and suffering is enormous, and so is the financial cost. It would be reasonable to assume that at least $200 billion or more per year is added onto our national health care costs as a result of these errors, and we can anticipate these numbers will continue to rise yearly unless there is intervention and some serious changes begin to take place. Safety must become a major priority, instead of profits. A priority shift is imperative.

We begin to see why our money-driven health care system still ranks something like 26th in the industrialized world — in both cost and quality. Yet we have idiots like Sen. Rand Paul (who during his election campaign falsified his board certification), making the statement: “The right to health care is slavery” as quoted in Raw Story of May 11, 2011.

Paul is merely one of many elected representatives who oppose true health care reform. There is a pattern here. These are the same folks who oppose tax increases for those Americans making over $250,000. Why? In the May 2011 issue of Vanity Fair, Nobel Prize winning economist Joseph Stiglitz provides a simple and compelling explanation:

These are the same “representatives of the people” who voted in the House of Representatives, 235-191 to defund a program in the new health care law that finances the construction of preventative-care clinics at schools. These wellness clinics are intended to provide primary care, dental services, and mental health care for youths who otherwise would not receive early medical attention, resulting in lower health-care costs in the long run. These same Neanderthals voted to defund any tax deductions as medical expenses for abortions, regardless of medical need, save in cases of rape or incest.

In previous articles I have dealt at length with the greed and manipulation of health care by the health insurance industry and PhARMA. One of great corporate interests that dominate health care today is the medical equipment industry. ProPublica published an outstanding article by Charles Ornstein and Tracy Weber on this subject. Of course this is only the tip of the iceberg, since it only covers one sub-speciality medical society. The payoffs to others, with orthopedic implants, home health care equipment, etc., is truly mind-boggling. Again, this is one of many topics presented in Maggie Mahar’s very well documented book.

I recently have encountered two questionable decisions by the FDA. We, of course, we’re well aware that the appointees to the FDA by President George W. Bush, were creatures of the pharmaceutical industry. I had assumed that the situation had been corrected within the Obama administration. Time will tell.

Colchicine is a medication derived from the Autumn Crocus that for many centuries has been used for the treatment of acute gouty arthritis. I first encountered it in my pharmacology classes in medical school in 1942. Its use was first described as a treatment for gout in De Materia Medica in the first century CE. It is mentioned in the Eber’s Papyrus, ca. 1500 B.C. It was brought to America by Benjamin Franklin who suffered from gout.

In my latter years I have encountered mild attacks of gout and hence have maintained a small supply of generic colchicine tablets in my medicine cabinet, a bottle of 30 tablets costing $15. Last week I stopped by my neighborhood pharmacy for a refill. The price had jumped to $152.

It seems that over all of these years no formal “randomized clinical trials” had ever been carried out; hence, the FDA granted exclusive rights for three years to URL Pharma to carry out those trials, and at the same time gave them exclusive rights to sell the medication under the trade name of Colcrys — at whatever price that they might deem appropriate. Go here to learn more.

On April 20 Raw Story ran an article by David Edwards, titled, “Big Pharma set to take over medical marijuana market.” In 2007 GW Pharmaceuticals announced that it had partnered with Otsuka to bring “sativex” — or liquified marijuana — to the U.S. The companies recently completed Phase II efficacy and safety trial testing. Phase III is generally thought to be the final step before the drug can be marketed in the U.S.

The Phase III trials will be directed at the treatment of pain in patients with advanced cancer who experience inadequate analgesia during optimized chronic opioid therapy. Saltivex is the brand name for a drug derived from cannabis salvia. It is an extract from the whole plant cannabis, not a synthetic compound. Naturally no facts have been revealed regarding pricing!

At the same time the FDA is poised to approve the drug for big Pharma, state-licensed medical marijuana dispensaries that provide relief for thousands of Americans are under attack by other federal agencies. Raw Story reported on May 4, 2011 that the DOJ plans to arrest state licensers, which could doom the medical marijuana industry. These two events would almost seem to be too coincidental!

Either some Caesar or Napoleon will seize the reigns of government with a strong hand, or your republic will be fearfully plundered and laid waste by barbarians in the Twentieth Century as the Roman Empire was in the fifth; with this difference, that the Huns and Vandals who ravaged the Roman Empire came from without, and your Huns and Vandals will have engendered within your own country by your own institutions.

I think our situation is less like that of France in 1789, but closer to Germany in 1934. Hence, the idea of a Caesar is not far-fetched and even more frightening.