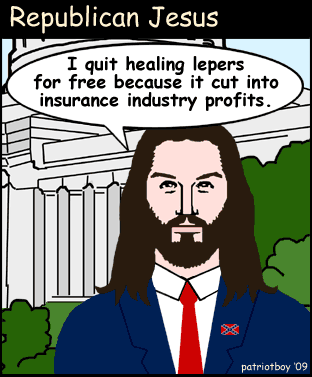 We hear cries of woe about costs of universal care from the insurance-subsidized Republican members of Congress. Yet, these same folks have no problem with spending on foreign wars, of questionable need…

The Machiavellian maneuvering in the United States Congress continues. As a keen observer of the complexities involved in health care legislation I am confused.

Granted there are a few forthright, honest elected representatives such as Rep. Alan Grayson on the scene; however, there is much conflicted double talk arising from our elected representatives in general. How can the general public ever understand? Just what is a “public option”? Hopefully, it would be a program akin to Medicare available to all. Apparently not. During a recent discussion on MSNBC it was pointed out the program may well be limited to those currently without insurance, or for employers to provide employee benefits when they find commercial insurance overly expensive.

It would seem that those who have found their insurance to be too expensive, or those who would turn to the public plan for more humane, more intensive, or more honest, coverage, may well be excluded. One still feels the evidence of Faustian arrangements between certain Democratic Senators and the insurance/pharmaceutical/medical equipment alliance.

The drumbeat of opposition to universal health care continues. Reasonably new on the scene is an organization interestingly named AmeriPac –- the American Political Action Committee — whose motto is “No Obama Care!” These folks have amassed every lie, misrepresentation, and distortion into one central location, producing pamphlets, bumper-stickers, e-mailings, the works.

An interview with ex-senator Dr. Bill Frist on Fox News October 18, 2009, makes one appreciate the well funded efforts that the health insurance cartels employ to hoodwink the public. It brings to mind Josef Goebbels’ credo:

“There is no point in seeking to convert the intellectuals. For intellectuals would never be converted and would anyway yield to the stronger, and this will always be ‘the man on the street.’ Arguments must therefore be crude, clear, and forceable, and appeal to the emotions and instincts, not to the intellect. Truth is unimportant and entirely subordinate to tactics and psychology.

The Pharmaceutical Research and Manufacturers of America,. the drugmakers’ main trade group, shattered records by spending nearly $7 million on lobbying July through September. The outlay brings PhARMA’s total so far this year to nearly $20 million, just shy of the group’s entire lobbying budget for 2008. Other big spenders for the third quarter included Pfizer, Inc. ($5,42 million); the American Hospital Association ($3.8 million); the AMA ($3.95 million); Amgen, Inc. ($3,0 million; Bayer Corporation ($2.45 million) and Americas Health Insurance Plans ($2.4 million). Many of Washington’s broader interest groups have also ramped up their lobbying efforts. The powerful U.S. Chamber of Commerce, which is at loggerheads with President Obama on health care, climate change and other key issues, spent a stunning $35 million on lobbying in the third quarter.

When we have a prescription filled at an outlandish price we are indirectly paying for the lobbies that are working to defeat efforts to establish price control on prescription drugs. The pharmaceutical industry spends much more on advertising than on research. It seems like every other commercial on television is for a pharmaceutical product.

Finally keep in mind that, when you are paying a health insurance premium, 40% of it will not go to pay your medical bills, but will provide for multimillion dollar executive salaries, lush stockholder dividends, and payments to your elected representatives aimed at defeating universal health care for you and your family. Universal health care would provide insurance without exclusions, high co-pays, and denials of preexisting conditions. Universal health care would be akin to Medicare, where you can choose your own physician, consultants, or out of town clinics, without the exclusions placed on HMO sponsors such as the Humana Corporation.

We hear cries of woe about costs of universal care from the insurance-subsidized Republican members of Congress. Yet, these same folks have no problem with spending on foreign wars, of questionable need, which have cost the American citizens $923,211,375,341 since 2001. The taxpayer has spent $693,457.283,717 in Iraq and $229,754,091,624 in Afghanastan, according to costofwar.com

Paul Craig Roberts, writing in Information Clearing House on October 21, 2009, notes: “According to reports the U.S. Marines in Afghanastan use 800,000 gallons of gasoline per day. At $400 per gallon that comes to a $320 million daily fuel bill for the Marines alone.” Mr. Roberts also notes that it costs $750,000 per year for each soldier we have in Afghanastan. And we cannot pay for health care for the 45,000 Americans who die each year for lack of resources to pay for the fundamental right of having decent health car! Please check out Rep. Grayson’s new website Names of the Dead.

Happily there is a bit of good news and that is the fact that both the House and Senate are working to include the health insurance industry under the antitrust laws, from which they and major league baseball have been the sole exemptions. Furthermore, there is legislation pending in both the House and Senate, the latter sponsored by Sen. Debbie Stabanow, as SB 1776, that would eliminate Medicare’s Sustainable Growth Rate from the physician formula. This, plus a bill for health care reform, deemed necessary by the American College of Physicians, would provide a 10% bonus to primary care physicians for five years, establish a workforce Advisory Committee to develop and implement a national workforce strategy, redistribute unused graduate medical education funds to primary care, and create a CMS innovation center to test new payment models that support primary care.

In short we will begin to produce more family doctors, pay them a decent salary, and perhaps some day once again rediscover the house call, which is still available in many European nations. We have fewer primary care physicians than any Western nation. For no good reason some surgical specialists have an income 20 times that of a family doctor.

In the midst of all of this we again hear a cry from the highly paid specialties that Medicare discounts their usual fees. We who practiced prior to Medicare remember that that many of the elderly were able to pay only a token fee, and some could not pay at all; thus we who were in internal medicine, internal medicine subspecialties, or general practice were delighted to see, with the advent of Medicare, on time if discounted payment. I do believe that under a government sponsored program that a payment scheme like that of the Mayo Clinic or Cleveland Clinic should become the national standard.

I hope that Congress will pass a comprehensive public option and not the watered-down version noted in my first paragraph. In addition there must be some control of the insurance cartel concerning “pre-existing conditions.” It was noted in a 2008 study on law.com that women are discriminated against by the health insurance cartel, being charged as much as 48% more than men for health insurance. Of more than 3500 plans studied, 60% did not cover maternity care, and women are regularly denied coverage for “pre-existing conditions” which can include pregnancy or a previous C-section. In eight states and the District of Columbia, insurers are allowed to use a woman’s status as a survivor of domestic violence to deny her health insurance.

It would appear that President Obama has rid himself of his idée fixe concerning Sen. Snow and the need for “bipartisanship.” It seems that he finally has come out from under the cloud of subservience to the insurance, pharmaceutical, and medical appliance industries and will take an active part in providing the 60% of the public and 65% of the physicians with a true, unencumbered public option.

It also appears that the House of Representatives is listening to the majority of the American people and their physicians. One can only hope that Sen. Reid throws off his jellyfish facade, stands up like a true leader, and demands that the Democrats in the Senate vote for cloture, thus avoiding a filibuster by the “death care” inspired Republicans. (What do we do with Sen. Lieberman?) In the meanwhile the majority of the American public must stand firm against the corporations and their political allies who put profit above morality and the negative image of American society in the civilized world.

I am still not sure that the American public understands the term “public option.” I have seen no polling on the matter. Hence, I conducted a brief survey of my own in a grocery store checkout line, talking to six people. Two middle aged ladies with breast cancer ribbons on their lapels were fully informed. One elderly lady feared it would in some way interfere with her Medicare. (I explained that it was merely a Medicare-like program for those under 65, and she was satisfied.)

One gentleman told me that he had General Electric health insurance and was not interested. Another gentleman was fearful of “socialized medicine,” but it turned out that he was a Korean War Vet and attended the V.A. Clinic; hence, it was easy to explain in terms of the V.A. and his wife’s Medicare. The sixth, attired in hunter’s garb, assured me that any government program was “Communism,” and took off in his Hummer with the NRA sticker on the bumper.

4 Responses to Dr. Stephen R. Keister : The Public Option and the Public Good