ExxonMobil and the Oil Supply : The Bigger Picture 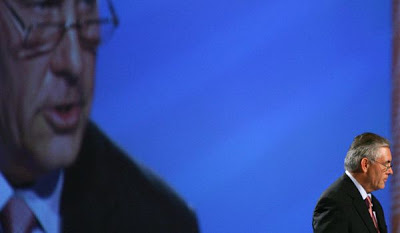 ExxonMobil CEO Rex W. Tillerson: What, me worry? Photo from Getty Images.
The good news and the, well…
Exxon says: No need to worry

Here is the good news as seen through the eyes of Texas-based global energy giant Exxon:

ExxonMobil is an industry leader in reserves replacement,” said Rex W. Tillerson, chairman and chief executive officer.“We have replaced more than 100 percent of production for 16 consecutive years, reflecting our strategic focus on resource capture, a disciplined approach to investment and excellence in project execution. Adding new reserves ensures that ExxonMobil will continue to develop new supplies of energy to meet future demand and support economic growth and improved standards of living.

This sounds like we don’t need to worry very much, at least about Exxon’s oil. But let us read between the lines.

We need to know that the world’s cheap conventional oil on dry land probably peaked in 2005, whereas most of the new oil being added is very expensive. The average price of adding new oil is thought now to be about $70 a barrel, which doesn’t leave much profit (today’s Nymex price is $77). The new oil reserves being discovered and produced are mostly deep underwater, or arctic, or heavy crude, or tar sand oil etc.; this is the kind of oil you go after only when you run out of the easy reserves to produce.

Exxon now produces only about 3% of world oil production. It used to be called “big oil” but a better term nowadays would be “baby oil.” Exxon already produced its main reserves in Texas etc., long ago.

The Mideast, OPEC politics, and, increasingly, Saudi production are now what really count in determining global oil price. They can keep the global price from sinking so much in a slack market, but they can’t hold price down very well when the world is demanding and producing at maximum, as the world saw in mid-2008.

There are several ways that Exxon’s news release paints too rosy a picture. First of all, what they carefully don’t say is the degree to which they are replacing their old cheap reserves on dry land with much more costly oil and gas offshore, etc. Anyone can drill for and find some oil in certain known areas, but to what degree is it profitable?

These additions are based on the corporation’s definition of proved reserves, which utilizes the long-term pricing basis that the corporation uses to make its investment decisions. This is a different price basis than the SEC basis, which uses 12-month average prices for the 2009 year-end reserves calculation.

Exxon says that their analysis does not comply with SEC practice. Perhaps one reason is that they seem to be considering gas as an equal replacement for oil. Gas as a fossil fuel is very expensive (~10X) to move around when compared to oil; this is why they used to flare it in West Texas. Oil is inherently more valuable than gas as a liquid fuel. It is irreplaceable in powering the world’s transportation, and it will be for a long time to come.

The third way Exxon can try to look good is by exploring the edges of their big old fields, which are some of the only rich areas left. There are certain tax advantages to the majors in underestimating their true reserves. When prices get high they can keep drilling and producing the dregs in their fields that are left over from their golden era:

The corporation’s reserves additions in 2009, the highest in the decade, reflect new developments with significant funding commitments as well as revisions and extensions of existing fields resulting from drilling, studies and analysis of reservoir performance.

This is not to say that Exxon reserves are not worth its stock price, whenever the global market tightens up and the global oil price soars again. However, Exxon’s best days as an energy producer are numbered, and it doesn’t like to admit that, or to discuss the implications of peak oil.

For those who want to understand the big picture, the sites Energy Bulletin and The Oil Drum are excellent places to go for the smart analysis needed to penetrate the cloud of corporate BS, as well as the popular oil addiction denial.

2 Responses to ExxonMobil and the Oil Supply : The Bigger Picture