Construction workers and supporters, many from fellow AFL-CIO unions, call for stronger safety and health protections in state with highest death rate. 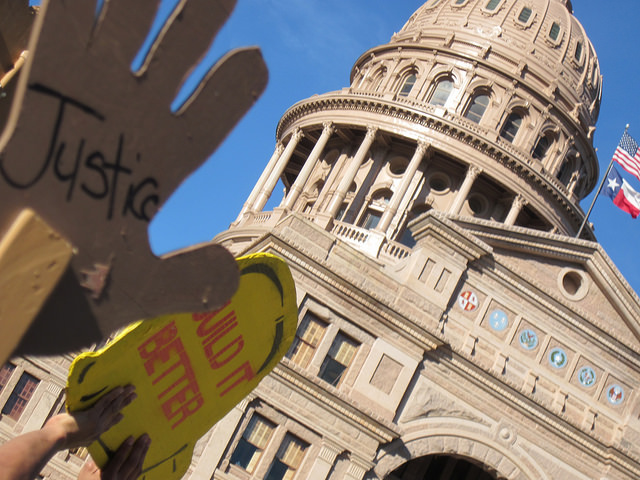 AUSTIN — “Texas does not have to be the state with the highest death rate nor with the highest rate of injuries in construction. The legislature can turn this around by adopting our legislative agenda for better safety and health for the workers who build Texas. That is why we are here today,” Worker’s Defense Project Executive Director Cristina Tsintzun said at a rally on February 25, 2015.

One thousand construction workers and supporters marched to the Texas State Capitol on a cold, blustery day in late February to call for stronger safety and health protections. The march was sponsored by the Workers Defense Project to dramatize the high number of deaths and injuries suffered by construction workers in Texas. The Austin American-Statesman did not cover it at all. Telemundo gave the march and the rally professional coverage.

Led by the fabulous Reagan High School Marching Band, the construction workers were joined by many AFL-CIO unions including electricians, carpenters, painters, laborers, ironworkers, state employees, and teachers. Many of the union members joined the teams of WDP activists who had conducted lobbying visits earlier in the day. 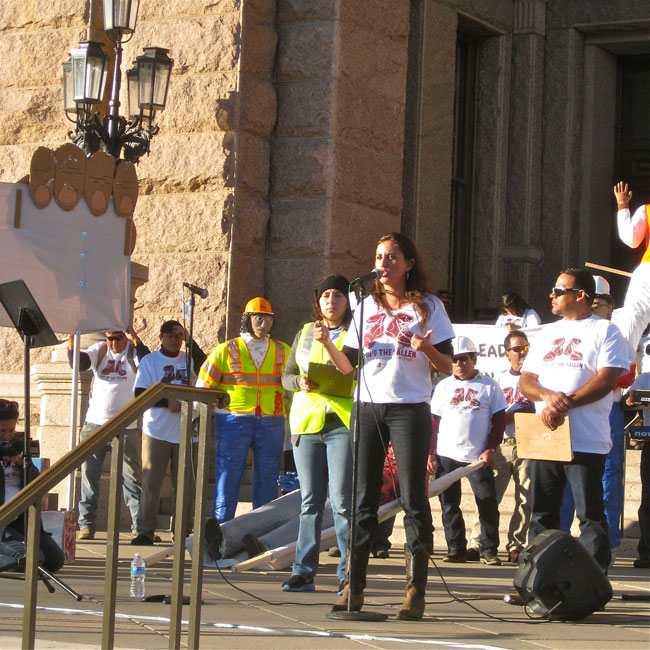 The high rate of injuries in construction in Texas is a major focus for WDP. A lack of safety measures, WDP leaders say, is the chief reason that one in five Texas construction workers has suffered an injury requiring medical attention. Texas also leads the nation in the rate of deaths in the construction industry, according to a 2007 study by the Center for Public Political Priorities. Texas had 142 deaths in that year and the state with the second highest rate was California with 81.

One reason for the high rate of injuries and deaths, according to WDP activists, is the lack of safety training. According to a study last year by WDP and the University of Texas at Austin, 60% of construction workers reported no safety training on the job.

Texas is the only state in the country where employers are not required to provide
workers’ compensation.

“It’s a statistic that the legislature and the governor ought to be ashamed of,” Said Becky Moeller, president of the Texas AFL-CIO. 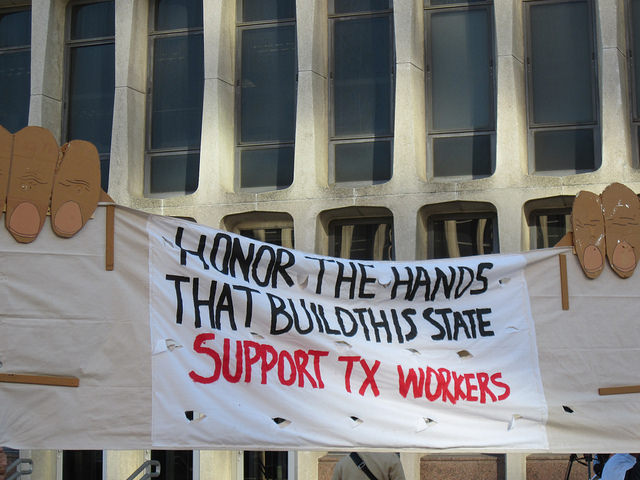 “Unions are another solution to high rates of injury and a lack of safety training,” Moeller said. Members of construction unions are covered by workers’ compensation that pays for medical treatment and pays part of your wage while you are off work. But the majority of residential construction and highway construction workers are not yet unionized.

“That is why the legislature has to act to pass laws to guarantee basic safety and health protections that many of the rest of us already have,” said Moeller.

WDP supporters fanned out across the Capitol on February 25 to support four key pieces of legislation. First is a bill requiring employers who do not offer workers’ compensation to provide information on injured workers to give legislators better data to assess the problem. A second bill requires rest breaks for construction workers during their shifts. Another calls for workers’ compensation or another form of medical coverage for construction workers. A fourth priority bill protects a worker who is a victim of wage theft from retaliation when reporting a complaint.

An overwhelming majority of these construction workers are Hispanic with a large number being undocumented. The reality that some of the most dangerous jobs in Texas are being done by undocumented workers, who have few rights to defend themselves, is something that WDP has embraced as their mission.

For 13 years, WDP has led the fight to win basic workplace rights for immigrant workers.

For 13 years, WDP has led the fight to win basic workplace rights for immigrant workers in construction and other low-paying jobs in the greater Austin area. Their first major battle centered on wage theft.

WDP staff are proud of the advocacy record they have amassed over those years fighting wage theft. They have won over a million dollars in back pay for wage theft claims. As their success grew they realized that laws had to be changed to provide for greater protections to prevent wage theft. 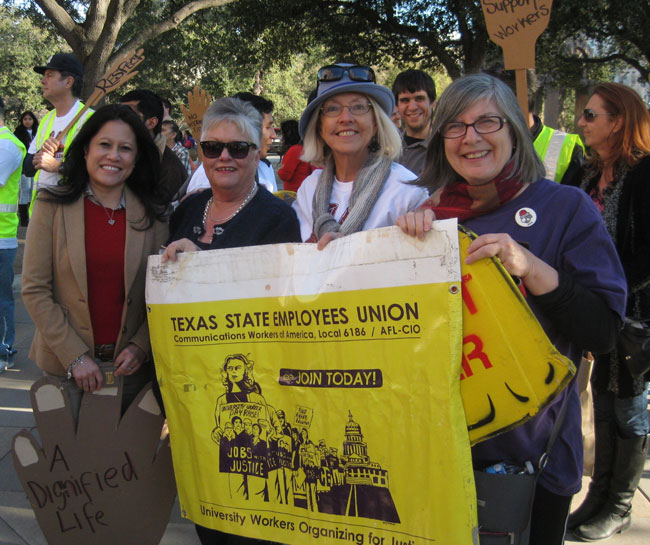 Two years ago WDP managed to pass legislation to curb wage theft, with the help of organized labor and progressive allies. According to the WDP website the bill “makes it easier for police departments across Texas to arrest employers who don’t pay their workers, and closes an important loophole that allowed employers to avoid criminal theft of services charges by making a minimal payment to their workers.” This bill, sponsored and championed by State Sen. Jose Rodriguez (D-El Paso) has helped thousands of workers who are victims of wage theft to recover their pay.

The second piece of state legislation passed was a misclassification protection law. Many construction workers who have no union representation are too often paid at a lower classification than the work they actually do. This has been a common way that unscrupulous contractors would commit wage theft. The law imposes fines on employers who are found guilty of misclassifying employees on state contracts.

WDP Deputy Director Emily Timms points out that when you deter a contractor from committing wage theft you are also helping level the playing field for the contractors who are playing by the rules.

Despite the majority conservative voting block in both the State Senate and House, WDP leaders are determined to press forward on their advocacy agenda for construction workers’ health and safety and for basic rights to be paid a fair wage for their work.

As an observer and participant in the preparations for the Day of the Fallen lobby day and march, it is apparent that the WDP leaders understand that winning effective legislation to gain rights for construction workers will take a long-term effort to organize the hundreds of thousands of these workers who have no union representation and who currently, in many cases, do not have legal status.

If you are interested in supporting the work of WDP, go to their website or drop by their Austin office at 5604 Manor Rd.

[Glenn Scott recently retired from a 32-year career as a union organizer; she continues to advocate for seniors, for reproductive justice for women, and for organizing unorganized workers for economic justice.]