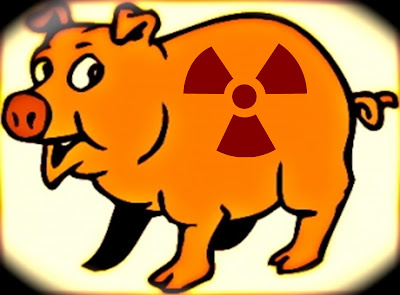 The mystery has been solved.

Where is this “new reactor renaissance” coming from?

There has been no deep, thoughtful re-making or re-evaluation of atomic technology. No solution to the nuke waste problem. No making reactors economically sound. No private insurance against radioactive disasters by terror or error. No grassroots citizens now desperate to live near fragile containment domes and outtake pipes spewing radioactive tritium at 27 U.S. reactors.

No, nothing about atomic energy has really changed.

Except this: $645 MILLION for lobbying Congress and the White House over the past 10 years.

As reported by Judy Pasternak and a team of reporters at American University’s Investigative Reporting Workshop, filings with the Senate Office of Public Records show that members of the Nuclear Energy Institute and other reactor owner/operators admit spending that money on issues that “include legislation to promote construction of new nuclear power plants.”

Money has also gone to “other nuclear-related priorities” including “energy policy, Yucca Mountain and nuclear waste disposal, plant decommissioning costs, uranium issues such as tariffs, re-enrichment and mining, and Nuclear Regulatory Commission funding.” But even that may not fully account for money spent on coal and other energy sources, or on media campaigning.

In short: think $64.5 million, EVERY YEAR since the coming of George W. Bush.

That’s $1 million per every U.S. Senator and Representative, plus another, say, $100 million for the White House, courts, and media.

“I think that’s understated,” says Journalism Professor Karl Grossman of the State University of New York/College at Old Westbury. The “torrent of lies” from General Electric and Westinghouse, the “Coke and Pepsi” of the nuclear industry, “has made the tobacco industry look like a piker.

Their past, present and/or future media mouthpieces, says Grossman, span CBS, NBC, and a global phalanx of interlocking radio-TV-print directorates.

All are geared, adds MediaChannel.org’s Rory O’Connor, to flood the globe with “Nukespeak,” the Orwellian lingo that sells atomic power while rhetorically airbrushing its costs and dangers.

Thus National Public Radio is now the Nuclear Proliferation Redux. Disgraced ex-Greenpeacer Patrick Moore (who also sells clear-cut forests and genetically modified food) is portrayed as an “environmentalist” rather than an industry employee.

That’s not to say all reactor advocates do it for the money. Certainly some have grown on their own to like nuke power.

But $645 million — SIX HUNDRED FORTY-FIVE MILLION — can buy a lot of opinion going one way, and suppresses a lot going the other. Op eds, air time, “independent” reports, phony claims that “green” nukes can solve global warming… not to mention campaign “donations,” fact-finding junkets, political fundraisers, K-Street dinners… all can be had for a trifling drip from the mega-slush fund.

The latest payback is Barack Obama’s $8.33 billion in promised loan guarantees for two new nukes proposed in Georgia. Two old ones came in at 3000% over budget at a site where the Nuclear Regulatory Commission warns the proposed new ones might crumble in an earthquake or hurricane.

All this BEFORE the U.S. Supreme Court ruled that corporations are “persons” who can spend without limit to buy Congress and the media. The cash pouring into the pockets of politicians voting for still more taxpayer money to build still more reactors will parallel the gusher of radiation that poured from Chernobyl.

But does this mean the flood of new reactors is inevitable?

Despite that cash tsunami, grassroots activists stopped $50 billion in loan guarantees three times since 2007. No new U.S. reactor construction has started since the 1970s, when public opinion was over 70% in favor of atomic power, and Richard Nixon promised 1,000 U.S. reactors by the year 2000.

It can’t solve its waste problems, can’t operate without leaking radiation, can’t pay for itself, and can’t get private insurance against terror or error.

Once hyped as “too cheap to meter,” Warren Buffett, the National Taxpayers Union, the Heritage Foundation, and the CATO Institute are among those joining the Congressional Budget Office in warning that atomic energy is really “too expensive to matter.”

With all those hundreds of millions to spend, the reactor backers are still selling a technological corpse. With licensing and construction and the inevitable unforeseen, not one new U.S. reactor can come on line in less than seven years.

Meanwhile, renewable/efficiency prices will continue to plummet. And grassroots opposition will not stop, as in Vermont and wherever else reactors operate or are proposed.

As Abe Lincoln reminds us: you can’t buy all the people all the time. And the ones that can’t be bought CAN be damn powerful.

Those loan guarantees, all that hype about a new nuclear age… they are NOT a done deal. They still must withstand a Solartopian revolution in green technology that’s left atomic power in its economic dust… and a human species whose core instincts DEMAND economic and ecological survival.

So when you hear some hired gun selling nukes, remember: even $645 million can buy only so much green lipstick for a dead radioactive pig.

And when Nature bats last, the final score is not about cash.

[Harvey Wasserman’s Solartopia! Our Green-Powered Earth is at www.harveywasserman.com, along with Harvey Wasserman’s History of the United States. He is Senior Advisor to Greenpeace USA and the Nuclear Information and Resource Service. This article was also published at http://freepress.org.]

4 Responses to Harvey Wasserman : Putting Lipstick on a Radioactive Pig