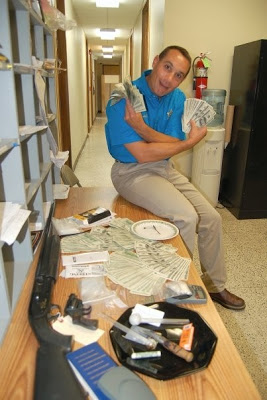 Award-winning journalist and author Jordan Flaherty will be Thorne Dreyer’s guest on Rag Radio, Tuesday, May 18, 2-3 p.m. (CST) on KOOP 91.7 FM in Austin. For those outside the listening area, go here to stream the show.

They will discuss Flaherty’s post-Katrina writings, his reporting about the Jena Six incidents and their aftermath, and about harassment of minorities, transgenders, sex workers, and others in New Orleans and in Louisiana — and about the positive community organizing that has occurred in response to this harassment.

At 4 a.m. on July 9 of last year, more than 150 officers from 10 different agencies gathered in a large barn just outside Jena, Louisiana. The day was the culmination of an investigation that Sheriff Scott Franklin said had been going on for nearly two years. Local media was invited, and a video of the Sheriff speaking to the rowdy gathering would later appear online.

The Sheriff called the mobilization “Operation Third Option,” and he said it was about fighting drugs. However, community members say that Sheriff Franklin’s actions are part of an orchestrated revenge for the local civil rights protests that won freedom for six Black high school students — known internationally as the Jena Six — who had been charged with attempted murder for a school fight.

One thing is clear: the Sheriff spent massive resources; yet officers seized no contraband. Together with District Attorney Reed Walters, Sheriff Franklin has said he is seeking maximum penalties for people charged with small-time offenses. Further, in a parish that is 85 percent white, his actions have almost exclusively targeted African Americans.

Sheriff Scott Franklin of Jena says he is trying to rid his community of drugs. Critics say he is pursuing revenge against the town’s Black community.

According to a report from Alexandria’s Town Talk newspaper, LaSalle Parish Sheriff Scott Franklin prepared the assembled crowd for a violent day. “This is serious business what we’re fixing to do,” said Sheriff Franklin. “If you think this is a training exercise or if you think these are good old boys from redneck country and we’re just going to good-old-boy them into handcuffs, you’re wrong. These people have nothing to lose. And they know the stakes are high.”

“It’s going to be like Baghdad out in this community at 5 a.m.,” he continued dramatically, explaining that their target was 37-year-old Darren DeWayne Brown, who owns a barbershop — one of the only Black-owned businesses in town — and his “lieutenants,” who Franklin said supplied 80 percent of the narcotics for three parishes. “Let me put it to you this way,” declared the Sheriff, “When the man says, ‘We don’t sell dope today,’ dope won’t get sold.”

Sheriff Franklin said that option one is for drug dealers and users to quit, option two is to move, and option three is to spend the rest of their lives in prison. And this day was all about option three. “They will get put in handcuffs, put behind bars today and never see the light of day again unless they are going out on the playground in prison,” he boasted.

At the end of the day, a dozen people were arrested on charges that ranged from contempt of court to distribution of marijuana, hydrocodone, or cocaine. Despite catching the accused residents by surprise with early morning raids, in which doors were battered down by SWAT teams while a helicopter hovered overhead and then search teams were brought in to take houses and businesses apart, no drugs or other physical evidence was retrieved.

All evidence in the cases comes from the testimony of 23-year-old Evan Brown of Jena, who also wore a hidden camera during the investigation that parish officials have said provides powerful visual evidence. “We’re completely satisfied with the results,” said LaSalle Sheriff’s Department Narcotic Chief Robert Terral, who refused further comment on the operation.

Lasalle Parish is a politically conservative enclave located in northwest Louisiana. Former Klansman David Duke received a solid majority of local votes when he ran for governor in 1991 — in fact, he received a higher percentage of votes in LaSalle Parish than in any other part of the state.

The Parish became famous in 2007 for the case of the Jena Six. In demonstrations that were called the birth of a 21st Century civil rights movement, an estimated 50,000 people marched in Jena. They were protesting a pattern of systemic racism and discriminatory prosecutions. All six youths, who once faced life in prison, are now either enrolled in college or are on their way.

The Sheriff told the Jena Times that he began preparing for Operation Third Option in November of 2007, less than two months after the historic protests. 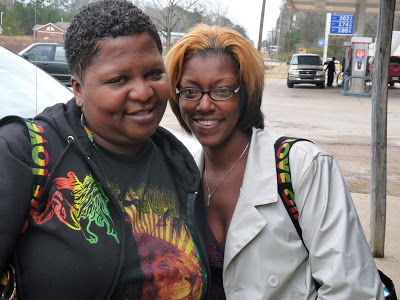 Caseptla Bailey (left) and Catrina Wallace were active in the campaign to support the Jena 6. Their door was broken down by police while they slept. Photo by Jordan Flaherty / The Rag Blog.
A terrifying morning

Catrina Wallace, 29, was sleeping in her bed with her youngest child when her door was broken down and she awoke to the feeling of a gun to her head. When she opened her eyes, her small home was filled with police. “I never seen that many police at one time,” she recalled. “Everywhere I looked all I saw was police. There were six or seven just in my bedroom.” She says police pointed guns at her small children and wouldn’t let her comfort them.

Catrina Wallace is the sister of Robert Bailey, one of the Jena Six. Along with her mother, Caseptla Bailey, she was one of the leaders of the campaign to free the accused youths, and she organized meetings and protests for months. Wallace says her political activism made her a target. “I’m a freedom fighter,” she says. “I fight for peoples’ rights. I’ve never been in trouble.”

As with every other house raided that day, the police found no drugs in Wallace’s home. According to Wallace, police initially claimed they found marijuana on her kitchen table, but later discovered that they had collected broccoli stems, left over from dinner the previous night.

Despite the lack of evidence, and the fact that she has lived her whole life in Jena and is raising three small children, she was held for a $150,000 cash-only bond. Her car, a 1999 Mitsubishi Gallant, was also seized by police, who continue to hold it in an impound lot. If she wants it back, Catrina will have to pay $12 a day to the lot for every day since it was seized, in July of last year — an amount already larger than the value of the car.

Samuel Howard was sleeping in his bed, naked, when police broke down his door at 5 a.m. Howard says police tasered him three times, twice in the back and once in his arm, and pointed guns at his three kids. They took him out of his house still naked, and brought him to a baseball field, along with the other arrestees from that day. There he says he spent another hour without any clothes, standing with the other arrestees, until police brought him an orange jailhouse jumper.

“They treated us like we was hard core killers,” says Howard, who says that in a small town like Jena where everyone knows each other, such violent tactics are uncalled for. “The sheriff knows me,” he says. “We went to school together. He knows I’m not a violent person.”

Howard is being charged with three counts of distribution of cocaine. His trial is scheduled for May 24 (Catrina Wallace’s is scheduled for the same week). As with the other defendants, the only evidence against him is the testimony and video from the police informant. Howard, who has seen the evidence, says he is not implicated in the video.

His home was badly burned up that day, apparently from flares that police fired inside, and his windows were all destroyed. Howard, who does some auto repair work, says his four vehicles — including two older cars that don’t run — were also seized by police.

Many of Jena’s Black residents say that the town’s white power structure — including the DA, Sheriff, and the editor of the local paper — wants revenge against Black people in town who stood up and fought against unjust charges. They complain that in a town that is mostly white, all but two of the people arrested were Black, and the only arrestees pictured in the town’s paper were Black. The sheriff “Just wants to humiliate people,” says Caseptla Bailey, Wallace’s mother, “Especially the African Americans.” The editor and publisher of the Jena Times, the town’s only paper, is Sammy Franklin, who has owned the paper since 1968. His son is Sheriff Scott Franklin.

A white-owned store around the corner from the courthouse in downtown Jena sells t-shirts commemorating Operation Third Option, with a design of a person behind bars. Black residents of Jena say that an earlier version of the shirt featured a monkey behind bars. They say that white residents of Jena have gloated about the arrests.

Some of the accused have hired attorneys, while others have had public defenders appointed. However, all involved say they doubt they can receive a fair trial in LaSalle. They say that white defendants with similar or worse charges received lower bonds, and face lesser sentences. “It’s crooked,” says Howard. “They ain’t playing fair down here, that’s all.”

Marcus Jones, father of Mychal Bell, one of the Jena Six youths, doesn’t mince words. “This is racially motivated,” he says. “It’s revenge.” He says that the problem is that while the Jena Six youths were freed, there were no consequences for the Sheriff or DA. “Wouldn’t none of this be going on if justice had been done the way it was supposed to have been,” he says.

Jones was not among those arrested, but in a small town like Jena, he knows everyone involved. He says he was shocked at the resources the police brought in. “Why did you need helicopters and military weapons?” he asks. “I could see it if you were going to arrest Noriega or the Mafia, but these are people with kids in their homes. The Sheriff’s department never had any violent run-ins with any of these people.”

Jones believes the entire campaign by Sheriff Franklin has been a gesture of asserting control over the Black community, and he calls for a federal investigation of the Sheriff’s department and DA.

Samuel Howard says that now he mostly stays home with his three kids, ages 12, 14, and 15. He’s afraid of the Sheriff’s office arresting him if he leaves the house, and he wants to stay close to his kids, who were traumatized by his arrest. “It scared them to death,” he says. “They still talk about it to this day.”

“They know they’re wrong,” said Howard, referring to the Sheriff and DA, “You can’t tell me they don’t know.”

Marcus Jones, Catrina Wallace, and others in Jena are available for interviews. 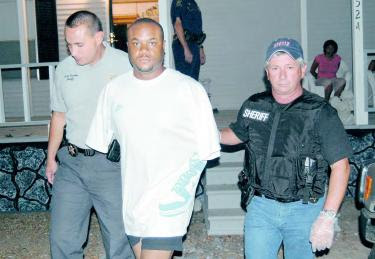 Representatives of the Jena, Louisiana, Sheriff’s Department arrest an unidentified suspect during drug raids July 9, 2009. Photo from the Jena Times. 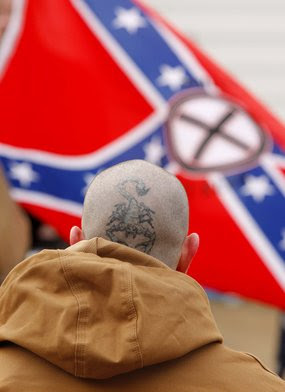 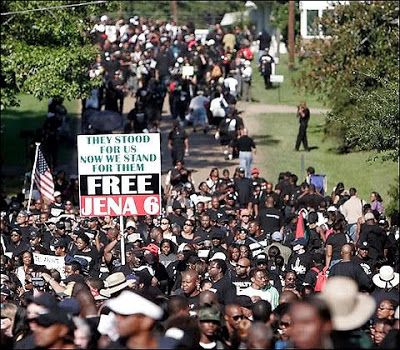 Demonstrators march in support of the Jena Six, September 20, 2007. Photo from The Cheddar Box.
The Rag Blog