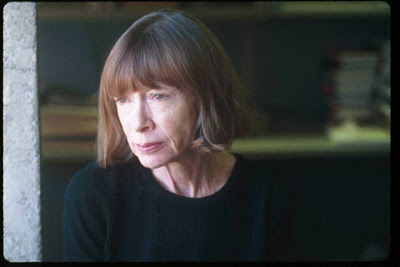 Portrait of Joan Didion by Robert Birnbaum.
Obsessed by ‘lipstick on a pig,’ economic ‘free fall’ and other ‘great stories,’ America has failed to see the real challenges it faces.
By Joan Didion / October 17, 2008

This piece appears in the New York Review of Books’ election issue, on sale this week. Novelist Didion is the author of “The Year of Magical Thinking” and “We Tell Ourselves Stories in Order to Live: Collected Nonfiction” (November 2008).

Midway through August, before the Democratic and Republican conventions, Chris Matthews made an offhand judgment on MSNBC that pretty much summed up the political mood in which the country found itself: “I’ve seen this election before, I think it was 1988.” He was referring of course to what was supposed to have been the certain 1988 victory of Michael Dukakis over George H.W. Bush, and to the ways in which a political party, most reliably the Democratic, can get overtaken by its own enthusiasm for being victimized; but what he said resonated beyond the concerns about Senator Obama’s candidacy just then beginning to surface.

It resonated because what seemed striking about the long and impassioned run-up to this election was not how different it had been — but precisely how similar it had been to previous such seasons.

We had kept talking about how different it was, but it wasn’t.

On a single mid-September morning these phrases would appear on the front page of The Washington Post: “stocks plummet,” “panic on Wall Street,” “as banks lost faith in one another,” “one of the most tumultuous days ever for financial markets,” “giant blue-chip financial institutions swept away,” “banks refusing to lend,” “Russia closing its stock market,” “panicked selling,” “free fall,” and “the greatest destruction of financial wealth that the world has ever seen.”

These were not entirely unpredictable developments.

For at least some months it had been clear that we were living in a different America, one that had moved from feeling rich to feeling poor. Many had seen a mandate for political change. Yet in the end the old notes had been struck, the old language used. The prospect for any given figure had been evaluated, now as before, by his or her “story.” She has “a wonderful story” we had heard about Condoleezza Rice during her 2005 confirmation hearings. “We all admire her story.” “I think she’s formidable,” Senator Biden said about Governor Palin a few weeks ago. “She has a great story. She has a great family.”

Senator Biden himself was said to have “a great story,” the one that revolved around the death of his first wife and child and taking the train from Washington to Wilmington to be with his surviving children. Senator McCain, everyone agreed, had “a great story.” Now as then, the “story” worked to “humanize” the figure under discussion, which is to say to downplay his or her potential for trouble. Condoleezza Rice’s “story,” for example, had come down to her “doing an excellent job as provost of Stanford” (this had kept getting mentioned, as if everyone at Fox News had come straight off the provost beat) and being “an accomplished concert pianist.”

Now as then, the same intractable questions were avoided and in the end successfully evaded. The matter of our continuing engagements in Iraq and Afghanistan and our looming engagements throughout the region had been reduced to bickering over who had or had not exhibited “belief in the surge.” “Belief in the surge” had been equated with the “success” of the surge, and by extension of our entire engagement in Iraq, as if that “success” were a fact rather than a wish. Such doublespeak was rampant. The increasing destabilization of the economy was already clear — an average of 81,000 jobs a month were lost all through the summer — but discussion of how to resolve the bleeding still centered on such familiar favorites as tort reform. This word “reform” kept resurfacing, but the question of who exactly was to be reformed was left to be explored mainly on “The View,” by Barbara Walters.

The leading candidates duly presented their “health care solutions,” not one of which addressed the core problem, which is the $350 billion a year it costs, according to a Harvard Medical School study, to cut in the commercial insurance industry. Fannie Mae and Freddie Mac, we were assured, had run into trouble not because of the systematic deregulation of the financial industry, the delinking of loans from any imperative to get them paid off — but because, according to Governor Palin (who had apparently missed the briefing at which it was explained that neither entity received government funding until the recent necessity for bailing them out), Fannie Mae and Freddie Mac were “too big and too expensive to the taxpayer.”

Time got wasted in the familiar ways. The presence of Barack Obama in the electoral process allowed us to talk as if “the race issue” had reached a happy ending. We did not need to talk about how the question of race has been and continues to be used to exacerbate the real issue in American life, which is class, or absence of equal opportunity. Instead we could talk about what Barack Obama meant by “lipstick on a pig,” and whether it was appropriate for him to go off on vacation “to some sort of foreign, exotic place.” The “foreign, exotic place” in question was of course Hawaii.

We could argue over whether “intelligent design” should be taught in our schools as an alternative to evolution, and overlook the fact that the rankings of American schools have already dropped to twenty-first in the world in the teaching of science and twenty-fifth in the world in the teaching of math. We could argue over whether or not the McCain campaign had sufficiently vetted its candidate for vice-president, but take at face value the campaign’s description of that vetting as “an exhaustive process” including a “seventy-question survey.” Most people in those countries where they still teach math and science would not consider seventy questions a particularly taxing assignment, but we could forget this. Amnesia was our preferred state. In what had become our national coma we could forget about Fannie Mae and Freddie Mac and Bear Stearns and Lehman Brothers and Merrill Lynch and AIG and Washington Mutual and the 81,000 jobs a month and the fact that the national debt had been approaching $10.6 trillion even before Henry Paulson and Ben Bernanke mentioned the imperative need to spend, which is to say to borrow, $700 billion for securities backed by bad mortgages, a maneuver likely to raise the debt another trillion dollars. (“We need this to be clean and quick,” Paulson told ABC.)

We could forget the 70 percent of American eighth graders who do not now and never will read at eighth-grade levels, meaning they will never qualify to hold one of those jobs we no longer have. We could forget that we ourselves induced the coma, by indulging the government in its fantasy of absolute power, wielded absolutely. So general is this fantasy by now that we approach this election with no clear idea where bottom is: what damage has been done, what alliances have been formed and broken, what concealed reefs lie ahead. Whoever we elect president is about to find some of that out.