‘A riot is the language of the unheard.’ — Martin Luther King 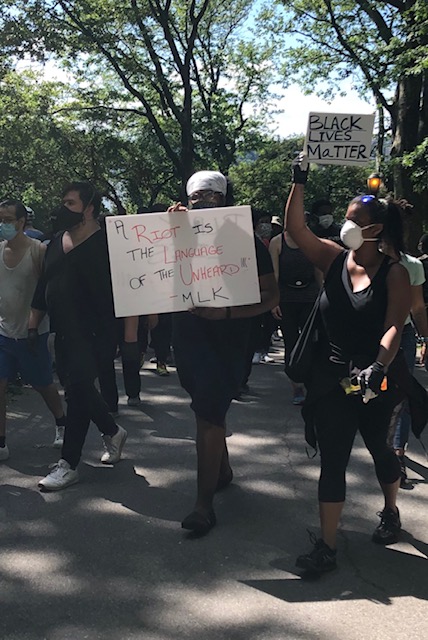 SONOMA COUNTY, Calif — I have not actually been in the streets protesting over the past week or so, but I have followed the news of the rioting and also the news of the looting. I have been with the protesters in spirit, albeit not with the looters. A longtime New York friend of mine who is a journalist and magazine editor sent me a photo of some demonstrators in his neighborhood. One of them carried a sign that said, “A riot is the language of the unheard, MLK.” He nailed it.

Indeed, Dr. King understood that people go into the streets to riot when their voices are not heard, when the authorities don’t listen to them, and don’t change any of the egregious conditions that lead to riots.

Readers and contributors to The Rag Blog surely understand King’s statement. Some of them have probably rioted in the streets of Chicago, New York, Washington, D.C., Los Angeles, San Francisco, and Austin. I have protested in the streets many times in the nation’s capital, and from New York to California. I have also taken part in riots, trashed windows, and battled cops. I did this most dramatically on December 9, 1969, five days after two Chicago Black Panthers, Fred Hampton and Mark Clark, were shot and killed by law enforcement. I had to put my body on the line. Thousands of other men and women joined me.

For my efforts I was arrested and beaten on the street and then taken to two Manhattan precincts where I was “worked over,” to put it mildly, by a dozen or so police officers.

I know about police brutality from
my own experience.

I know about police brutality from my own experience. I still feel uncomfortable in the presence of police officers knowing that they have the power to arrest me, jail me, and beat me. My heart goes out to all the thousands of American citizens who have risked their lives and their freedom this May to protest the murder of George Floyd and to call for an end to police brutality and racism, which are both viruses that undermine democracy, protect the wealthy against the poor, and buttress injustice and inequality.

As readers of The Rag Blog know, the victims of police brutality are usually people of color. The cops are often, though not always, white.

Police brutality is nothing new. Nor are demonstrations against police brutality. They have been with me every since 1968 when I was arrested and jailed for the first of several times. I never liked being arrested and going to jail. I never liked going to court, either. The judges seemed to be on the side of the cops, not the citizens abused by cops.

I remember that after the demonstrations at the Democratic National Convention in Chicago in 1968, the Walker Report concluded that a “police riot” had taken place.

It’s the police who create the violence and the conditions for rioting and looting.

I know that some individuals go to demonstrations determined to smash windows, overturn cars and set fire to property. But on the whole it’s the police who create the violence and the conditions for rioting and looting. They’re the criminals.

If the four Minneapolis cops had not murdered George Floyd the rioting would not have taken place. George Floyd’s death comes at the end of a long decade of police murders of black men and black women, too, from Missouri and Florida to Louisiana, New York, and beyond. I remember Rodney King. I will never forget him and other black men and women cut down by bullets from cop guns.

Sad to say, this year will go down in history as the year of COVID-19, and also the year of the nationwide protests against police brutality. It’s a sad time in the history of our country. My neighbors in Cotati, California, where I live, tell me that we need the police for protection against crime and criminals. Perhaps so.

But we also need protection against the police. They often operate outside the law and in conjunction with racists. I learned that first in the summer of 1964, when Mississippi law enforcement worked hand in hand with the KKK to murder three civil rights workers, and then to hide their bodies.

Shame on the United States of America.

Shame on the United States of America. Some will say that riots and marches in the streets won’t end police misconduct and violence. History seems to suggest that they are right. But one can’t not protest. One has to turn to the language of the unheard and to speak with one’s body as well as with one’s heart and one’s mind.

A friend of mine was arrested in New York just a few days ago. He was in the street, not demonstrating. He and dozens of other New Yorkers were rounded up. Some were cuffed so tightly that their wrists bled. My friend is a lawyer. He says that the police action was “unconstitutional behavior.” He’s ready to go to court. I hope he does.