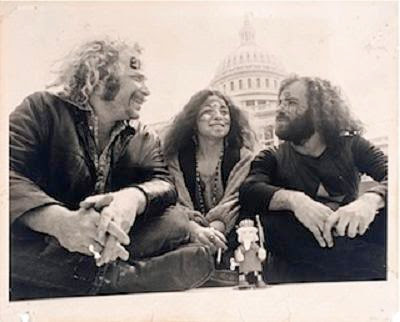 Judy Gumbo with (left) Stew Albert and Jerry Rubin, May, 1971. Photo from yippiegirl.com.
In California this week, book signings, an historic poster exhibition, a theatrical event and a ‘Champion of Justice’ award all shine a light on Sixties activists and their progeny.

For some cosmic reason, this is Celebrate 1960s Radicals-And-Our-Children week in California. On Saturday April 18, in Oakland, I and at least 600 others witnessed my friend Steve Bingham get the National Lawyers Guild’s prestigious Champion of Justice Award. On Sunday I attended the opening of the Berkeley Historical Society’s “Up Against the Wall” exhibit of 1960’s posters and artifacts. Last night, in downtown Berkeley, former Weatherman Mark Rudd spoke and signed his long-awaited book Underground.

Friday will be the world premiere in nearby Marin County of Zayd (son of Weather leaders Bernardine Dohrn and Billy Ayers) Dohrn’s play Magic Forest Farm, advertised as a young woman’s journey back to her past to confront the truth. Next Wednesday, Chesa (raised by Bernardine and Billy, the son of former Weather person Kathy Boudin and still imprisoned David Gilbert) Boudin, will be in San Francisco signing Gringo — his coming-of-age work which recently provoked a disgustingly arrogant and mean-spirited review in the New York Times.

Not too shabby for us Bush-battered 1960s types!

It’s difficult for me to convey how heart-warming and deeply emotional Steve’s recognition event turned out to be. Steve Bingham, you may recall, spent almost 14 years underground in Europe after being charged with five counts of conspiracy murder for allegedly smuggling a gun past metal detectors into San Quentin so that prison leader George Jackson could “escape” — and be shot to death. In 1984 Steve resurfaced in the Bay Area with his wonderful wife Francoise, and, after a trial lasting six months — one of the longest, if not the longest trials ever in the State of California — Steve was completely exonerated.

It felt like a miracle seeing this tall, sweet, gentle man, flying silver hair somewhat trimmed for the occasion, wearing a deep reddish/pinkish crushed velvet shirt and garlanded with a lei, get a long, enthusiastic standing ovation recognizing his lifelong contributions to social justice — not just the 1960s struggle, or his survival underground, but also for his last 20 years at Bay Area Legal Aid protecting the rights of the imprisoned, the poor and the homeless. For me this was time-travel—back to the day when we proudly used the words radical and revolutionary as self-descriptors. It felt a lot like coming home.

Next day, I ran into Gus Newport, the well known African-American former mayor of Berkeley at the poster exhibit. Many posters came from the remarkable collection of the late FSM (Free Speech Movement) activist turned children’s science teacher and author Michael Rossman. One, the Berkeley Liberation Program, is the exact same poster I gave to the Stew and Judy Gumbo Albert Archives at the Labadie Collection at University of Michigan. My late husband Stew Albert, SDS founder Tom Hayden, I, and a large contingent of Berkeley radicals collectively wrote the Berkeley Liberation Program during the 1969 People’s Park uprising. We begin by making a declaration that still resonates:

Gus and I reminisced about how, back in the day, we rarely put the year on political posters — just the month and day. We lived so much in the intensity of the present; we were so busy “making history” that documenting it by putting the year on a publication was the furthest thing from our minds.

My favorite long-forgotten artifact was a small pamphlet that Tom, Stew, I, and others put together in 1969, titled “Every Soldier a Shitworker, Every Shitworker a Soldier.” 1969 was the year that, at least in Berkeley, Women’s Liberation came into full flower. This tiny handbook was published, as was the Berkeley Liberation Program, by a collective we named, with no lack of youthful grandiosity, the “International Liberation School.” For a mere 25 cents, young radicals learned, among other organizational skills, that women and men must equally share the “shitwork.” Good soldiers in the revolution give women’s work equal importance to everything else. So we believed and so we attempted to act.

At the exhibit I also ran into Mario Savio’s widow Lynne Savio Hollander, and Michael Rossman’s widow Karen McClellan. We widows of well-known 60s guys share a unique bond, but our grieving process is no different from anyone else—up/down, forward/back, eventually you survive and thrive, but your life is never the same. Mario, a gentle soul and truly charismatic speaker was at the center of Berkeley’s 1964-65 Free Speech Movement. Every fall Lynn and her fellow FSM’ers put on the Mario Savio Memorial Lecture at which they award an annual $6000 prize to a young person or persons with a deep commitment to human rights, social justice, and proven ability to transform their commitment into effective action.

Last night was Mark Rudd’s turn. I had not seen Mark for ages up until two years ago, when my fiancé David Dobkin and I had a warm, affectionate reunion with him and his wife Marla Painter at their New Mexico home. At the time, Mark said he figured Bernardine and Billy wouldn’t like his book. It’s not because of the narcissism that my dear friend Jonah Raskin called him on in The Rag Blog — I mean, he is Mark Rudd, what else do you expect? It’s his memoir, he’s allowed. Last night Mark described his trajectory as going from schlemiel to media darling, to being wanted by the FBI to going underground—but never truly leaving the schlemiel behind.

I really appreciate Mark’s highly personal writing style — there are even places where, in my opinion, he could have gone deeper and been more authentic. Marla said essentially the same thing last night. But Mark does explore his feelings with way more emotional openness than Cathy Wilkerson did in Flying Too Close to the Sun — and for this he is to be congratulated.

What Bernardine and Billy aren’t likely to enjoy about Underground is Mark spilling his version of the beans about his former friends. He has his regrets and doesn’t especially hold back about who he blames. I believe that blaming and regretting are part of the grieving process — for a while I blamed Stew for dying, for the terrible loss he inflicted on me. Perhaps this is just Mark’s way of channeling his anguish at all the losses: loss of life in the Townhouse and the Brinks robbery, the loss of comrades forced underground and those still in jail, to say nothing of factionalized friendships, lost youth, and the demise of an organization he so dearly loved. A North Vietnamese friend once gave me some strategic advice about dealing with friendships which Mark, perhaps, might have benefitted from: “Be good to friends who are good to you, also be good to friends who are bad to you, for only friends will go with you on the long road to revolution.”

Mark never considered himself a Yippie. He said last night he lost his sense of humor pretty early on in SDS. And we Yippies never felt close to SDS — we experienced the organization as too serious, too focused on ideology and, as Yippie leaders Abbie Hoffman and Jerry Rubin never forgot or forgave, SDS initially advocated not coming to Chicago for the 1968 protests — before having a last minute change of heart.

Those who are making the movies and writing the books, memoirs, blogs and graphic novels will ultimately define our history. As best as I can reconstruct, both Mark and Cathy Wilkerson believe that, after a certain amazing moment in which everyone in SDS felt empowered to change the world, divisive internal conflicts turned the organization into a cult of isolated, fanatic, self-destructive individuals with, at least for a time, an ideological commitment to offensive violence. Both Mark and Cathy say they disagreed in their hearts with this direction as it was happening, but also went along, victimized by their own ambivalence.

I’ve learned in my life that, when more than one person says essentially the same thing about a shared experience, there’s likely some kernel of truth in what they say. It truly saddens me to recognize that Weatherman turned into a cult. Romantic idealist that I am, I prefer to remember historical Weatherman for what it stood for — inspirational courage, exemplary risk-taking and a passionate commitment to ending racism and an immoral, illegal war in Vietnam.

Each one of us from back in the day has her or his own Sixties. Mark has made a terrific contribution by sharing his. I encourage you to buy Underground and go to here for his speaking schedule.

On Friday I’ll see what Zayd Dohrn’s play reveals about the search for past truths. I’ll keep you posted.

[Judy Gumbo Albert was an original member of the 1960s countercultural protest group known as the Yippies — along with her late husband Stew Albert who died on Jan. 30, 2006. Judy co-authored The Sixties Papers: Documents of a Rebellious Decade (Greenwood Press, 1984) and The Conspiracy Trial (Bobbs-Merrill, 1970). Her articles available online include “The Battle of Chicago,” about the 1968 Democratic Convention, and “What Were Those 1960’s Terrorists Thinking Anyway,” about the 1971 Mayday anti-war protests.