Just two short days ago, we posted this. No need to say much more, although I reiterate this is going to get really bleak before it gets any better. We just bet Lehman doesn’t have too much to say about the talks.

Please see the breaking developments below. 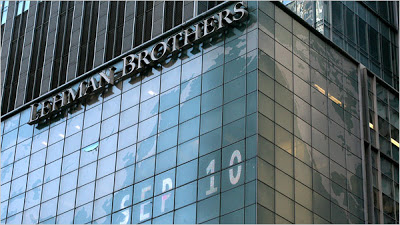 NEW YORK — As the outlook for Lehman Brothers dimmed Sunday, U.S. and foreign banks were pressed to create a plan aimed at inoculating the global financial system against the investment bank’s failure, a top investment banking official said.

Banks were in tense talks to create a pool of money worth up to $100 billion to lend troubled financial companies, the official said on condition of anonymity because the discussions were ongoing. And officials at the U.S. Treasury and the Federal Reserve were expected to announce they are prepared to be more generous in the Fed’s emergency lending program for commercial and investment banks.

The plan comes as top government officials and Wall Street executives held marathon, but so far fruitless, meetings to save Lehman Brothers, and amid signs that the 158-year-old investment bank might be forced to seek bankruptcy protection and liquidate. The company’s shares have plunged 95 percent in the past year over worries that it does not have enough money to cover losses from its massive real estate holdings.

The official also said the Treasury Department and the Fed were pushing Bank of America Corp. to buy Merrill Lynch & Co. On Friday, Merrill Lynch’s shares fell as investors fretted it might be the next investment bank to come under pressure from its portfolio of risky mortgage-backed securities.

Expectations that the 158-year-old Lehman would survive dimmed Sunday afternoon after Barclays PLC withdrew its bid to buy the investment bank. Barclays and Bank of America were considered front-runners to buy Lehman, which is foundering under the weight of $60 billion in soured real estate holdings.

The Lehman talks originally were aimed at selling the investment bank in whole or in part. The deal was tripping on the potential buyers’ insistence that they receive the same kind of help that Bear Stearns Cos. got last March when JPMorgan Chase & Co. bought the securities firm with a $29 billion Fed-backed loan.

Treasury Secretary Henry Paulson has said the government will not help close a Lehman deal, and it was clear late Sunday he was not budging.

If no deal were reached, it raised the specter of a bankruptcy and liquidation of the investment bank, which in turn could have a tumultuous effect on world markets. Late Sunday, Dow Jones industrial average futures were down 276 points, or 2.4 percent, at 11,182.

Traders and bankers across Wall Street came into the office Sunday to prepare their departments for what is expected to be a brutal day in the market. JPMorgan employees who work trading desks were asked to come in at 7 a.m. EDT, way before the market’s 9:30 a.m. open.

An employee at Lehman Brothers, who spoke on condition of anonymity, said employees were briefed of the situation earlier Sunday afternoon via conference call. Lehman executives did not explicitly say the company was filing for bankruptcy protection, but essentially confirmed the bank was planning to liquidate its assets.

There were other signs that Lehman was moving closer to a bankruptcy filing, with several reports that it has hired Weil, Gotshal & Manges, the law firm that handled the collapse of investment firm Drexel Burnham Lambert in 1990.

Moreover, there was also an emergency trading session held at the International Swaps and Derivatives Association to “reduce risk associated with a potential Lehman Brothers Holdings Inc. bankruptcy.” The ISDA, which arranges trades for derivatives, said it was allowing customers to make trades and unwind positions linked to Lehman — but that those trades would be voided if no filing occurred before midnight.

Paulson, Timothy Geithner, president of the New York Fed, and Securities and Exchange Commission Chairman Christopher Cox were among those taking part in the Lehman meetings. Federal Reserve Chairman Ben Bernanke is actively engaged in the deliberations but wasn’t in attendance.

Paulson’s tough bargaining stance received support from outside observers Sunday, who argued that the government had no choice but to draw a line in the sand.

“If Treasury put money into the Lehman deal, then going forward no deal would get done without Treasury help,” said Mark Zandi, chief economist at Moody’s Economy.com. “Every potential buyer would wait until Treasury stepped in and that would mean Treasury would be on the hook for a lot more bailouts.”

The current situation is different from Bear Stearns’ situation six months ago.

In Lehman’s case, financial markets have been aware of the company’s problems for a much longer period and have had time to prepare. Investment banks also now have the ability to obtain emergency loans directly from the Fed, a crucial support that they did not have back in March when Bear Stearns was rescued.

Bankers and government officials were also trying to tackle a broader agenda that includes problems at American International Group Inc. and Washington Mutual Inc., said the investment bank officials, who were briefed on the talks.

AIG , the world’s largest insurer, and WaMu, the nation’s biggest savings bank, have taken steep losses during the past year from risky investments. There were reports that AIG plans to disclose a restructuring by early Monday that’s likely to include the disposal of major assets including its aircraft-leasing business and other holdings.

Lehman put itself on the block earlier last week. Bad bets on real-estate holdings — which have factored into bank failures and caused other financial companies to founder — have thrust the firm in peril. It has been dogged by growing doubts about whether other financial institutions would continue to do business with it.

Richard S. Fuld, Lehman’s longtime CEO, pitched a plan to shareholders Wednesday that would spin off Lehman’s soured real estate holdings into a separately traded company. He would then raise cash by selling a majority stake in the company’s unit that manages money for people and institutions. That division includes asset manager Neuberger Berman.

And then there’s this, even more dramatic development:

In one of the most extraordinary days in Wall Street’s history, Merrill Lynch is near an 11th-hour deal with Bank of America to avert a deepening financial crisis while another storied securities firm, Lehman Brothers, hurtled toward liquidation, according to people briefed on the deal.

Bank of America has offered $50 billion or $29 a share for Merrill Lynch, people briefed on the negotiations said. Merrill shares closed at $17.05 on Friday.

The dramatic turn of events was prompted by the cataclysm of losses that has shaken the American financial industry over the last 14 months.

The moves came after a weekend of frantic negotiations between federal officials and Wall Street executives over how to avert a downward spiral in the markets. Questions still remain about how the market will react and whether other firms may still falter like AIG, the large insurer, and Washington Mutual, both of whose stocks fell precipitously last week.

Coming just a week after the government took control of mortgage lenders Fannie Mae and Freddie Mac, the magnitude of the industry’s reshaping is staggering: two of the most powerful firms on Wall Street, Merrill Lynch and Lehman, will disappear.

The weekend’s once unthinkable outcome came after a series of emergency meetings at the Federal Reserve building in downtown New York in which the fate of Lehman hung in the balance. In the meeting, Federal Reserve officials and the leaders of major financial institutions were trying to complete a plan to rescue the stricken investment bank.

But as the weekend unfolded, Barclays and Bank of America, which had both considered buying all or part of Lehman, decided that they could not reach a deal without financial support from the federal government or other banks.

As a result, people briefed on the matter said late Sunday that Lehman Brothers would file for bankruptcy protection, in the largest failure of an investment bank since the collapse of Drexel Burnham Lambert 18 years ago.

Lehman will seek to place its parent company, Lehman Brothers Holdings, into bankruptcy protection, as its subsidiaries remain solvent while the parent firm liquidates, these people said. A consortium of banks will provide a financial backstop to help provide an orderly winding down of the 158-year-old investment bank. And the Federal Reserve has agreed to accept lower-quality assets in return for loans from the government.

As efforts to acquire Lehman faltered, Bank of America turned to Merrill Lynch.

Merrill’s 15,000 brokers will be combined with Bank of America’s smaller group of wealth advisers. The entity will be run by Robert McCann, the head of Merrill’s global wealth management business.

Fleming, Merrill’s president, will be president of the combined bank’s corporate and investment bank while Thomas Montag, a former Goldman executive who started at Merrill in August, will head all the merged company’s all risk, trading and institutional sales.

The leading proposal to rescue Lehman had been to divide the bank into two entities, a “good bank” and a “bad bank.” Under that last scenario, Barclays would have bought the parts of Lehman that have been performing well, while a group of 10 to 15 Wall Street companies would agree to absorb losses from the bank’s troubled assets, according to two people briefed on the proposal. Taxpayer money would not be included in such a deal, they said.

But that plan fell apart on Sunday, all but assuring that Lehman would be forced to liquidate.

The overarching goal of the weekend talks had been prevent a quick liquidation of Lehman, a bank that is so big and so interconnected with others that its abrupt failure would send shock waves through the financial world. Of deep concern is what impact a Lehman failure would have on other securities firms, insurance companies and banks, which have come under mounting pressure in the markets.

Even as Lehman and Merrill played out, the insurance company, the American International Group, was planning a major reorganization and a sale of its aircraft leasing business and other units to stabilize its finances, a person briefed on the company’s strategy said on Sunday.

AIG became one of the focuses at an emergency gathering of Wall Street executives over the weekend, and was trying to arrange a capital infusion in the face of possible credit downgrades.

It was unclear whether AIG would succeed in its capital search, but a person briefed on the discussions said it was seeking more than $40 billion even as it tried to sell assets to shore up its financial footing.

Among the businesses likely to be sold is AIG’s aircraft leasing business, the International Lease Finance Corporation. Founded in 1973, the business has nearly 1,000 planes in its fleet.

Investors, afraid that AIG would have to absorb further write-downs in its already damaged mortgage securities and collateralized debt obligations, have driven down the company’s shares in recent days. The stock closed Friday at $12.14 a share, a decline of 46 percent for the week.