Nancy Miller Saunders : Jane Fonda and the ‘Home of the Brave’ 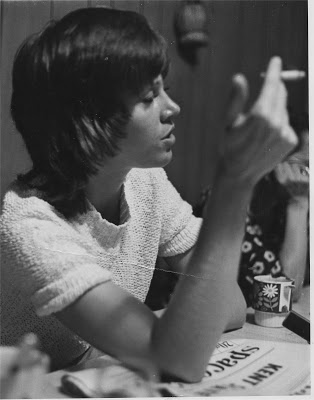 Jane Fonda and the ‘home of the brave’

“I was infuriated as I learned just how much our soldiers were being lied to about why we were fighting in Vietnam and I was anguished each time I would be with a young man who was traumatized by his experiences.” — Jane Fonda

The same day Obama and the Democrats caved in to Republican Tea Party extremists on the deficit, I learned that the cable channel QVC canceled an appearance by Jane Fonda because of angry calls from extremists objecting to her anti-Vietnam War activities. It has been nearly 40 years since that war ended yet these Swiftboater-types still cling to hatred of her, much of which is based on lies and distortions.

Yes, the picture of her sitting and laughing on a Vietnamese anti-aircraft gun damned her in many people’s eyes. But appearances can be misleading, which they are in this case as she explains in a recent piece, “The Truth About My Trip To Hanoi,” posted on her blog.

Although one picture may be worth a thousand words, those words can be misleading as easily as they can be revealing. But rather than risk letting go of their hatred by listening to her explanations of what happened and why she went to North Vietnam, these Swiftboaters have clamped their minds shut around their hatred. One mistake in an otherwise exemplary campaign to stop an increasingly unpopular war and Fonda is condemned forever and always.

We claim in our national anthem that ours is “the home of the brave.” Is it, when our president and Congress knuckle under to extremists’ threats to bankrupt the country? Is it, when cable channels let bullies frighten them out of letting a movie star peddle her latest book on an entirely different topic?

Jane Fonda is a brave woman who looked beyond her instinctive feelings that would not let her imagine the United States could ever fight an unjust war. But then she met and listened to active duty GIs and Vietnam veterans. She began to study that war and discovered what it was doing to the men being sent to fight it. She worked to find them help they needed.

When they asked, she spoke for them, using her celebrity to amplify their voices in an effort to get the American people to listen to what they had to say about what was being done in our name and to our sons, brothers, and neighbors. Only with knowledge — not emotional assumptions, no matter how treasured — can we correct our mistakes and maybe, just maybe, avoid making them again in the future. But, sadly, we have repeated them in Iraq.

Fonda also campaigned for an organization that was unprecedented in our history: Vietnam Veterans Against the War (VVAW). Never before had U.S. combat veterans massed together to protest the continuation of the war in which they fought, but Vietnam veterans did just that, beginning in 1968.[1]

Two years later Fonda was working with VVAW and I found myself listening to the war’s veterans after VVAW asked a group of us filmmakers to film their first two major demonstrations. They pointed out that they had the message and we had the means to broadcast it.

We put together four film crews to accompany VVAW and document the first demonstration, a RAW March over Labor Day weekend, 1970, from Morristown, New Jersey, to Valley Forge, Pennsylvania.[2] (RAW stood for Rapid American Withdrawal from Vietnam.) Those of you old enough to remember that day may know that we risked being busted for crossing a state line to foment a riot, even though starting a riot was definitely not our intention.

Whenever possible VVAW used paradigms from the American Revolution to emphasize their patriotism and dedication to our founding principles. The route they chose was one some of George Washington’s troops took to Valley Forge that memorable winter. In towns along the way, the veterans performed guerrilla theater in which they used volunteers acting as Vietnamese civilians to demonstrate their sanctioned brutality during the many search and destroy missions they had been sent on. 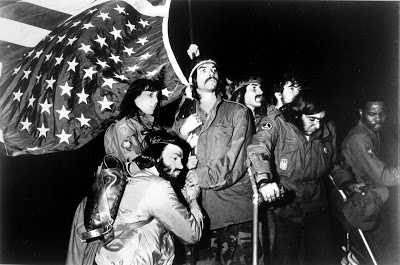 We filmmakers were with VVAW the entire weekend, even camping on the ground next to the veterans’ encampment all three nights. We interviewed them, waded into the middle of their guerrilla theater to film it, and watched with growing admiration as they resisted provocation after provocation. They knew what violence is like and the damage it can do. They did not want to yield to it here at home.

At Valley Forge on Labor Day, VVAW staged a rally that began with more than 200 veterans making a moving entrance. Fonda was one of the speakers, again using her celebrity to amplify what the veterans had to tell their fellow citizens. She then left on a nationwide tour of campuses, introducing veterans to VVAW and recruiting volunteers for the next major action.

That second action was the Winter Soldier Investigation (WSI) in Detroit, Michigan, Jan. 31-Feb. 2, 1971, when more than 100 Vietnam veterans gave “straightforward testimony — direct testimony — about acts which are war crimes under international law. Acts which these men have seen and participated in. Acts which are the inexorable result of national policy.”[3]

Contrary to extremists’ accusations, VVAW carefully vetted the men it let testify. All had to have their discharge papers and IDs with them. Their testimony was checked against what other veterans knew, against documented evidence and whatever else the organizers could lay their hands on. We filmed the entire three days of testimony as well as related events and interviews with men who testified. Fonda financed us and attended the investigation, though she did not speak at it.[4]

The memories I brought away from the WSI are of haunted eyes of old men who had seen too much grief in already long lives — as they looked at me from youthful faces. The contrast was proof of their stories. I remember seeing tough, war-hardened men break down and weep. I remember them hugging each other for mutual support. I remember listening to gut-wrenching testimony hour after hour for the full three days.

And I remember a love that spread from the veterans to include all of us who took the time to listen, to really listen, to what they had to say. This was a love far more powerful than any romantic love. It was the love of shared commitment.

Working on those two films with VVAW changed my life, much as I imagine listening to GIs and veterans changed Fonda’s. Neither of us had to do what we did, but our hearts and souls had been touched. We knew, as few civilians did, why the war had to be ended. Its destruction had come home in the bodies and minds of those sent to fight it. Sadly there are people still trapped with the hatred necessary for war, necessary to make rational human beings kill other human beings.

I was so moved that I vowed to write the truths I learned about the war, about our national policy, and about the terrible toll it had taken on its veterans, and about the Nixon administration’s efforts to silence and discredit VVAW. A number of veterans entrusted their stories to me to tell, much as others had trusted Fonda to speak for them.

In far subtler ways than the blatant lies and hatred used to vilify Fonda, I was hounded, intimidated, pressured, and threatened — in attempts to make me shut up. The pressure was subtle, and friends to whom I turned for help told me to “stop being so paranoid” — but some of the veterans stood by me. The first two people not directly involved with VVAW to believe me both had connections in the CIA, which suggests that I was not being paranoid. At times I was so terrified that I did stop… for a while.

The cumulative result of this harassment is that it took me nearly 40 years to finally keep my vow. Unable to find a publisher brave enough to work with me, I had to self-publish Combat by Trial: An Odyssey with 20th Century Winter Soldiers.[5] All that interference would make another good book.

In a second book I would include the lessons I learned from the veterans about overcoming one’s fears, about reaching down inside oneself to find the courage needed to continue, about the value of humor and laughter. And I would write about a man I met, Budd Saunders, a combat veteran who believed me — although he was not a VVAW member or even a veteran of the Vietnam War.

Budd protected me, loved me, married me, and encouraged me to finish Combat by Trial. On our living room wall is a photograph of two of the veterans who most influenced me during those difficult years. One of them, Scott Camil, was hounded far worse than I was. He was framed several times, once for a capital offense (kidnapping), and he was shot in the back (the bullet barely missing his heart) by DEA agents when he refused to let them set him up on a drug deal.

Underneath their photograph I have pasted a quote from Scott: “If you let them demoralize you, then they’re effective. If you don’t, they aren’t. That’s up to you, not them.”

If enough of us keep such thoughts in mind, instead of clinging to our fears and wishful beliefs, we can rebuild our “home of the brave.” But it will take all of us finding the strength and courage that dwells within each of us to speak out against lies, distortions, and intimidation; to stand up to the corporate bosses who would squeeze us dry for their profit. And, above all, to stop letting hatred destroy us personally and as a nation.

[1] Iraq and Afghanistan veterans have joined together in Iraq Veterans Against the War (IVAW).

[3] Excerpt from the transcript of the opening statement to the Winter Soldier Investigation, January 31, 1971.

[Nancy Miller Saunders was a member of Winterfilm Collective which documented activities of the Vietnam Veterans Against the War. She is the author of Combat by Trial and is a freelance writer living in the Arkansas Ozarks with her husband Budd Saunders.]

11 Responses to Nancy Miller Saunders : Jane Fonda and the ‘Home of the Brave’