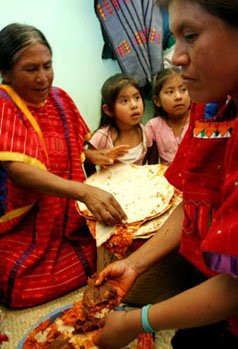 The FIOB is a political organization of indigenous communities and migrants, with chapters in Mexico and the U.S. It advocates for the rights of migrants, and for the right not to migrate — for economic development which would enable people to stay home. Indigenous Triqui women prepare meat and their traditional large tortillas. Photo by David Bacon.
The Right to Stay Home
By David Bacon / July 14, 2008

JUXTLAHUACA, Oaxaca, Mexico — For almost half a century, migration has been the main fact of social life in hundreds of indigenous towns spread through the hills of Oaxaca, one of Mexico’s poorest states. That’s made the conditions and rights of migrants central concerns for communities like Santiago de Juxtlahuaca.

Today, the right to travel to seek work is a matter of survival. But this June, in Juxtlahuaca, in the heart of Oaxaca’s Mixteca region, dozens of farmers left their fields, and women weavers their looms, to talk about another right: the right to stay home.

In the town’s community center, two hundred Mixtec, Zapotec and Triqui farmers, and a handful of their relatives working in the US, made impassioned speeches asserting this right at the triannual assembly of the Indigenous Front of Binational Organizations (FIOB). Hot debates ended in numerous votes. The voices of mothers and fathers arguing over the future of their children echoed from the cinder block walls of the cavernous hall.

In Spanish, Mixteco and Triqui, people repeated one phrase over and over: the derecho de no migrar – the right to not migrate. Asserting this right challenges not just inequality and exploitation facing migrants, but the very reasons people have to migrate to begin with. Indigenous communities are pointing to the need for social change.

About 500,000 indigenous people from Oaxaca live in the US, 300,000 in California alone, according to Rufino Dominguez, one of FIOB’s founders. These men and women come from communities whose economies are totally dependent on migration. The ability to send a son or daughter across the border to the north, to work and send back money, makes the difference between eating chicken or eating salt and tortillas. Migration means not having to manhandle a wooden plow behind an ox, cutting furrows in dry soil for a corn crop that can’t be sold for what it cost to plant it. It means dollars arrive in the mail when kids need shoes to go to school or when a grandparent needs a doctor.

In Oaxaca, the category of extreme poverty encompasses 75 percent of its 3.4 million residents, according to EDUCA, an education and development organization. For more than two decades, under pressure from the World Bank and US loan conditions, the Mexican government has cut spending intended to raise rural incomes. Prices have risen dramatically since price controls and subsidies were eliminated for necessities like gasoline, electricity, bus fares, tortillas and milk.

Raquel Cruz Manzano, principal of the Formal Primary School in San Pablo Macuiltianguis, a town in the indigenous Zapotec region, says only 900,000 Oaxacans receive organized health care, and the illiteracy rate is 21.8 percent. “The educational level in Oaxaca is 5.8 years,” Cruz notes, “against a national average of 7.3 years. The average monthly wage for non-governmental employees is less than 2,000 pesos [about $200] per family [per month], the lowest in the nation. Around 75,000 children have to work in order to survive or to help their families.”

“But there are no jobs here, and NAFTA [the North American Free Trade Agreement] made the price of corn so low that it’s not economically possible to plant a crop anymore,” Dominguez asserts. “We come to the US to work because we can’t get a price for our product at home. There’s no alternative.”

Without large-scale political change, most local communities won’t have the resources for productive projects and economic development that could provide a decent living. Towns like Juxtlahuaca don’t even have wastewater treatment. Rural communities rely on the same rivers for drinking water that are also used to carry away sewage. “A typical teacher earns about 2,200 pesos every two weeks [about $220],” says Jaime Medina, a reporter for Oaxaca’s daily Noticias. “From that they have to purchase chalk, pencils, and other school supplies for the children.”

Because of its indigenous membership, FIOB campaigns for the rights of migrants in the US who come from those communities. It calls for immigration amnesty and legalization for undocumented migrants. FIOB has also condemned the proposals for guest-worker programs. Migrants need the right to work, but “these workers don’t have labor rights or benefits,” Dominguez charges. “It’s like slavery.”

At the same time, “we need development that makes migration a choice rather than a necessity – the right to not migrate,” explains Gaspar Rivera-Salgado, a professor at UCLA. “Both rights are part of the same solution. We have to change the debate from one in which immigration is presented as a problem to a debate over rights. The real problem is exploitation.” But the right to stay home, to not migrate, has to mean more than the right to be poor, the right to go hungry and homeless. Choosing whether to stay home or leave only has meaning if each choice can provide a meaningful future.

In Juxtlahuaca, Rivera-Salgado was elected FIOB’s new binational coordinator. His father and mother still live on a ranch half an hour up a dirt road from the main highway, in the tiny town of Santa Cruz Rancho Viejo. There, his father Sidronio planted 300 avocado trees a few years ago, in the hope that someday their fruit would take the place of the corn and beans that were once his staple crop. He’s fortunate – his relatives have water, and a pipe from their spring has kept most of his trees, and those hopes, alive. Fernando, Gaspar’s brother, has started growing mushrooms in a FIOB-sponsored project, and even put up a greenhouse for tomatoes. Those projects, they hope, will produce enough money that Fernando won’t have to go back to Seattle, where he worked for seven years.

This family, perhaps, has come close to achieving the derecho de no migrar. For the millions of farmers throughout the indigenous countryside, not migrating means doing something like it. But finding the necessary resources, even for a small number of families and communities, presents FIOB with its biggest challenge. This was the source of the debate at its Juxtlahuaca assembly.

Rivera-Salgado says, “we will find the answer to migration in our communities of origin. To make the right to not migrate concrete, we need to organize the forces in our communities, and combine them with the resources and experiences we’ve accumulated in 16 years of cross-border organizing.” Fernando, the greenhouse builder and mushroom farmer, agrees that FIOB has the ability to organize people. “But now we have to take the next step,” he urges, “and make concrete changes in peoples’ lives.”

Organizing FIOB’s support base in Oaxaca means more than just making speeches, however. As Fernando Rivera-Salgado points out, communities want projects that help raise their income. Over the years, FIOB has organized women weavers in Juxtlahuaca, helping them sell their textiles and garments through its chapters in California. It set up a union for rural taxis, both to help farming families get from Juxtlahuaca to the tiny towns in the surrounding hills, and to provide jobs for drivers. Artisan co-ops make traditional products, helped by a co-operative loan fund.

The government does have some money for loans to start similar projects, but it usually goes to officials who often just pocket it, supporters of the Institutional Revolutionary Party, which has ruled Oaxaca since it was formed in the 1940s. One objective debated at the FIOB assembly was organizing community pressure to win some of these resources. But any government subsidy is viewed with suspicion by activists who know the strings tied to it.

Another concern is the effect of the funding on communities themselves. “Part of our political culture is the use of regalos, or government favors, to buy votes,” Rivera-Salgado explains. “People want regalos, and think an organization is strong because of what it can give. But now people are demanding these results from FIOB, so do we help them or not? And if we do, how can we change the way people think? It’s critical that our members see organization as the answer to problems, not a gift from the government or a political party. FIOB members need political education.”

Political abstention isn’t an option, however, warns Juan Romualdo Gutierrez Cortez. “We aren’t the only organization in Oaxaca – there are 600 others. If we don’t do it, they will.” But for the 16 years of its existence, FIOB has been a crucial part of the political opposition to Oaxaca’s PRI government. Gutierrez, a schoolteacher in Tecomaxtlahuaca, was FIOB’s Oaxaca coordinator until he stepped down at the Juxtlahuaca assembly. He is also a leader of Oaxaca’s teachers union, Section 22 of the National Education Workers Union, and of the Popular Association of the People of Oaxaca (APPO).

In June of 2006, a strike by Section 22 led to a months-long uprising, led by APPO, which sought to remove the state’s governor, Ulises Ruiz, and make a basic change in development and economic policy. The uprising was crushed by federal armed intervention, and dozens of activists were arrested. According to Leoncio Vasquez, an FIOB activist in Fresno, “the lack of human rights itself is a factor contributing to migration from Oaxaca and Mexico, since it closes off our ability to call for any change.” This spring, teachers again occupied the central plaza, or zocalo, of the state capital, protesting the same conditions that sparked the uprising two years ago.

Gutierrez himself was not jailed during the uprising, although the state issued an order for his detention. But he’s been arrested before. In the late 1990s, he was elected to the Oaxaca Chamber of Deputies, in an alliance between FIOB and Mexico’s left-wing Democratic Revolutionary Party (PRD). Following his term in office, Gutierrez was imprisoned by Ruiz’s predecessor, Jose Murat, until a binational campaign won his release. His crime, and that of many others filling Oaxaca’s jails, was insisting on a new path of economic development that would raise rural living standards, and make migration just an option, rather than an indispensable means of survival.

Despite the fact that APPO wasn’t successful in getting rid of Ruiz and the PRI, Rivera-Salgado believes that “in Mexico we’re very close to getting power in our communities on a local and state level.” He points to Gutierrez’s election as state deputy, and later as mayor of his hometown San Miguel Tlacotepec. Other municipal presidents, allied with FIOB, have also won office, and activists are beginning to plan a FIOB campaign to elect a Federal deputy.

FIOB delegates agreed the organization would continue its alliance with the PRD. Nevertheless, that alliance is controversial, partly because of the party’s internal disarray. “We know the PRD is caught up in an internal crisis, and there’s no real alternative vision on the left,” Rivera-Salgado says. “But there are no other choices if we want to participate in electoral politics, so we’re trying to put forward positive proposals. We’re asking people in the PRD to stop fighting over positions, and instead use the resources of the party to organize the community. We can’t change things by ourselves. First, we have to reorganize our own base. But then we have to find strategic allies.

“Migration is part of globalization,” he emphasizes, “an aspect of state policies that expel people. Creating an alternative to that requires political power. There’s no way to avoid that.”