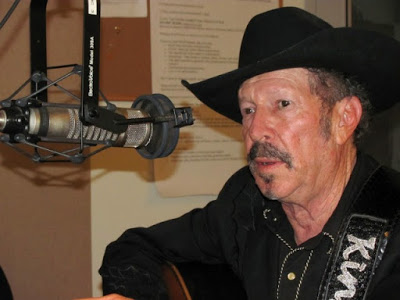 Kinky Friedman in the studios of KOOP-FM in Austin, Texas, Friday, October 19, 2012. Photo by William Michael Hanks / The Rag Blog.

Noted Texas Singer-songwriter, mystery writer, and social satirist Kinky Friedman of “Texas Jewboys” fame — and a former independent candidate for governor of Texas — said on Rag Radio, Friday, October 19, that he’s seriously considering a second run for governor in 2014, this time as a Democrat.

On the show, Kinky speculated about his political future; discussed his musical past and current “BiPolar World Tour”; related his experiences with musicians like Willie Nelson and Bob Dylan; and talked about his latest books, Heroes of a Texas Childhood, and Roll Me Up and Smoke Me When I Die, written with Nelson, and his views on such topics as “political correctness” — a tenet that he has happily violated in the past.

Rag Radio is a syndicated radio show produced in the studios of KOOP-FM, a cooperatively-run, all-volunteer community radio station in Austin, Texas. You can listen to the podcast of Thorne Dreyer’s interview with Kinky Friedman here.

Kinky Friedman, who ran for Texas governor as an independent in 2004, received some 600,000 votes, about 13 percent of the total cast, and raised more money than Democratic candidate Chris Bell. Kinky — whose campaign slogan in 2004 was “Why the Hell not?” — said if he runs next time, it will be as an “old-fashioned Harry Truman Democrat… a real happy-warrior blue-dog Democrat.”

Counting such Texas Democratic legends as Barbara Jordan, Molly Ivins, and Ann Richards as his political models, Kinky said he thinks he could not only win the Democratic primary, but also gain substantial support among independents and even Libertarians and Tea Party-types in the general election.

Concerning the often sardonic approach of his last run, Friedman said, “I’ve evolved.” During his 2004 campaign, “People asked, ‘Do we want a comedian in the Governor’s mansion? Do we want a clown?’ Now they realize we’ve had one for nearly 12 years,” he said with a wry smile, referring to multiple-term Texas Governor (and failed presidential candidate) Rick Perry.

Kinky was roundly criticized by progressives after he wrote an article about Rick Perry for The Daily Beast on August 24, 2011 — which the Beast headlined “Kinky for Perry.” In the feature, Friedman answered his own hypothetical question — “Would I support Rick Perry for president?” — with a resounding “Hell, yes!”

On Rag Radio, Kinky said he never intended to actually endorse Perry, whom he characterized as his “political nemesis,” and meant the article to be humorous. “I’m not in the business of endorsing people,” he told us. “I’m a musician, which is a much higher calling than a politician.”

“Perry’s not a bad guy,” he said, and he’s “given us the best business climate in the country,” though he added that that probably would have happened even “if a blue-buttocked baboon were governor.” He criticized Perry for cutting funding for education, an issue which he said “isn’t even on Perry’s radar.”

“I don’t think that Perry and [Lt. Gov. David] Dewhurst have done anything in 12 years for the people, except they’ve both gotten rich,” Kinky said.

Kinky Friedman sings “Autograph,” dedicated to the late Levon Helm, on Rag Radio, Friday, October 19, 2012. Filmed by William Michael Hanks, The Rag Blog.
Kinky Friedman is a country-rooted singer-songwriter, a novelist whose witty detective stories gained him a wide audience and critical notice, and an edgy humorist and social satirist. He first gained fame with his band, Kinky Friedman and the Texas Jewboys, whose 1973 Vanguard album, Sold American — which featured songs like “They Ain’t Making Jews Like Jesus Anymore” and his feminist lampoon, “Get Your Biscuits in the Oven and Your Buns in the Bed” — was a masterwork of social commentary and raucous humor.

In the mid-1970s Kinky toured with Bob Dylan and the Rolling Thunder Review. In the ‘80s he was a mainstay at New York’s legendary Lone Star Café, where his shows featured guests like Robin Williams and John Belushi. He was a musical guest on Saturday Night Live in its first season and claims to have been the first “full-blooded Jew” to appear at the Grand Ole Opry.

Kinky Friedman’s droll and highly engaging detective novels feature a fictionalized version of himself solving crimes in New York City. He has also written books about everything from social mores to armadillos, and was a columnist for Texas Monthly magazine.

A 2007 compilation album called Why the Hell Not… featured artists like Willie Nelson, Lyle Lovett, Dwight Yoakum, and Asleep at the Wheel covering Friedman’s songs.

Kinky’s latest CD, Live from Woodstock, was recorded on the “first American leg” of his “BiPolar World Tour.” In March 2013 the tour will take him to Europe and Australia, where he will do “35 shows in 36 days, each one in a different city.”

Kinky also told the Rag Radio audience that a Russian filmmaker is currently making a movie of his detective book, Kill Two Birds and Get Stoned. “It’s about three Merry Prankster types who are trying to bring down a Starbucks in New York City. It’s a counterculture type of book. They’re doing it with a very European sensibility,” he said.

Kinky Friedman lives in Kerrville, Texas, at the Echo Hill Ranch, a summer camp for kids run by his family since 1952. He also runs the Utopia Animal Rescue Ranch at the same location. “We take in stray and abused animals,” he said. “We’ve been doing it for 14 years now, and we’ve adopted thousands of animals.”

And that experience has taught Kinky an important life lesson: “Money can buy you a fine dog, but only love can make him wag his tale.”

Coming up on Rag Radio:
THIS FRIDAY, October 26, 2012: Historian Martin Duberman, author of Howard Zinn: A Life on the Left.
November 2, 2012: Jan Reid, author of Let the People In: The Life and Times of Ann Richards.