Republicans and the Stimulus Plan : Betting on Hard Times 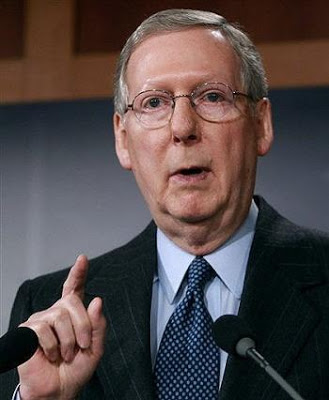 Kentucky Republican Sen. Mitch McConnell has stopped short of threatening a filibuster to stop the stimulus plan. Photo by AFP.

It is in the interest of the GOP to complain endlessly about waste and to throw up road blocks at every turn. Obama has unwittingly handed them the bipartisanship card to play. No matter what the Democrats offer them, they demand more and claim the Senate and House Democratic leadership is ignoring them.

The polls show that the vast majority of Republican voters want Republicans in Congress to reject the stimulus plan. The greatest part of their base has somehow blended right-wing populism, religion, and market fundamentalism in such a manner that only enormous economic pain over a very long period would lead to questioning Republican economics and Rush Limbaugh, who now seems to be the party’s most powerful spokesman. The 177 House Republicans had no incentive to support it because they come from solidly red districts. Some of the Senators do not have completely safe seats, but they know that voters have short memories and they have become accustomed to a lock step party discipline unparalleled in American history.

Some savvy Republicans may realize that recessions are good for their wealthiest and most powerful constituents. When unemployment is low, labor expenses are high. Hard times present excuses to cut hours, vacations, sick days and other benefits. A declining stock market forces little people to sell out and provides wonderful buying opportunities for those with surplus cash — often the people with enough knowledge to sell when it was high. Recessions also offer huge interests that seek oligopoly power the opportunity to swallow up smaller competitors.

No Republicans voted for the stimulus bill in the House, and eleven Democrats voted with the Republicans. Something similar will occur in the Senate. But first the GOP will extract a pound of flesh for not preventing a vote on the measure.

It looks like there are at least 35 solid Republican Senate votes against the stimulus plan. There is no indication that the remaining six GOP Senators will support it. There are some undecided votes. In the end, it may only be Susan Collins of Maine who might support it or at least not join in a serious filibuster. There are two Democratic Senators likely to vote against the stimulus plan, Ben Nelson of Nebraska and Kent Conrad of North Dakota. It is unlikely that either would support a GOP filibuster. There are other wavering Democratic senators.

Senator Mitch McConnell has stopped short of threatening a filibuster to block the stimulus bill. It is not in the interest of the Republicans to permanently block the plan. Should they do so, the fate of the economy would be their problem, and the people of the United States might finally learn that 41 negative votes in the Senate is about the same as a veto.

The slippery Kentuckian could probably produce a filibuster on a short term basis if he wished to do so in order to extract some concessions for letting the Democrats pass the bill. The most likely concession is leaving the Bush tax cuts for the rich in place for two more years. Senator Harry Reid has no choice but to allow amendments to the bill, so we can expect more money for tax cuts and considerably less for social programs to help those most hurt by the recession.

One wavering Democratic Senator is insisting that the stimulus bill include a program to rescue doubtful mortgages, and the Republicans have offered a similar plan. The Senate Democrats would be wise to include a substantial mortgage rescue plan in this bill. It might give a few reluctant Democrats the cover they need to vote for it. It would also give the appearance of reaching out to Republicans and perhaps save the Democrats from adding Republican tax reduction suggestions. It would gain popularity for the bill and make it less necessary to use TARP funds for rescuing home mortgages. It is important that TARP money not be used for home mortgages as it is needed to fuel industrial revival, which includes restructuring the domestic automobile industry. It is clear that that kind of legislation will not pass the Senate.

Senator Kay Bailey Hutchinson has greatly exaggerated the amount of social spending in the bill and has demanded that it all be cut. The truth is that social spending is very much needed as the number of people now receiving cash welfare payments is the lowest in 40 years. That is due to the infamous Republican welfare reform bill that Bill Clinton mistakenly signed. Every dollar that goes to the poor is an effective stimulus in that it will be spent immediately. On the other hand, tax cuts for folks higher up the ladder often go into savings or to pay off debt, and are less efficient in stimulating the economy.

Over the course of the New Deal, FDR invested about 25% of the GDP in stimulus and was not able to completely rescue the economy. The present stimulus package is a little less that 6% of the GDP. It is only the first installment of many similar steps if we are to escape a “lost decade” similar to that experienced in Japan.

This recession promises to last a number of years and will certainly extend well beyond 2012, in part because the problems of repairing a collapsed financial system are nothing short of enormous. Everyone in Washington must grasp this, and it offers the GOP a good shot of regaining power in 2012. Limbaugh was probably wrong in seeing 2010 as the comeback year, but it could be if the party is successful in delaying and trimming stimulus and bailout legislation. If they are successful in 2010, Republicans would have the opportunity to gerrymander themselves into a much better position in the House.

It is in the interest of the GOP to complain endlessly about waste and to throw up road blocks at every turn. Obama has unwittingly handed them the bipartisanship card to play. No matter what the Democrats offer them, they demand more and claim the Senate and House Democratic leadership is ignoring them. They are already using in an attempt to drive a wedge between Obama and his allies on the hill. Some among them might recall European history in the 1920s and 1930s, when there were revolts of the masses that brought rightists to power in many countries. The Republicans lost the 2008 election, but their base remains large and solid. They are betting that continued hard times will assist them in 2010 and 2012.

As usual, the Republicans are proving very good at getting out their message and their corporate media allies are helping them win the spin war. Congressional Democrats need to learn how to match their opponents in message management. They must also tag the GOP with responsibility for dragging us into this economic pit.