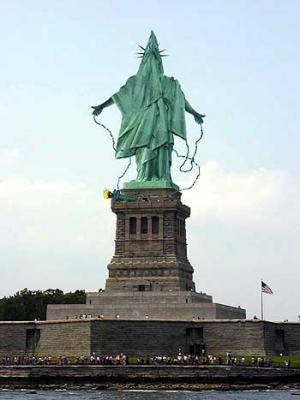 The ‘net’ is abuzz with talk of the imminent arrest of Americans for war crimes, specifically the tortures that were most certainly ordered by Bush and anticipated by then House Speaker Tom Delay who sponsored legislation to exempt the ‘President’ from war crimes prosecution. Since that time, Bush ‘lawyers’ have rewritten US Codes prescribing the death penalty for specific violations of the Geneva Conventions. Only the oblivious would not ask: was Bush planning 911, Afghanistan, Iraq even before he sought the office?

Of Bush plans to commit the war crime of torture, then Atty Gen John Ashcroft said: ‘History will not judge this kindly’ But history may also conclude that John Ashcroft was, in the final analysis, complicit with the Bush/Yoo conspiracy to make ‘legal’ numerous crimes against humanity that Bush had intended to commit in our name. There was, indeed, precedent but not the kind sought by Bush. It was Reinhard Heydrich who convened senior Nazi brass at Wannsee. Their mission: cook up a rationale, some legalistic mumbo jumbo, that will make mass murder and genocide legal!

Politico wrote the following as if it were current news.

Suddenly, something happens overseas that throws the presidential campaigns off the TV screens entirely: Former Defense Secretary Donald Rumsfeld, on vacation in Italy, is arrested and brought to The Hague to face war crimes charges.

Politico is not alone in thinking it just a matter of time until an American is arrested, charged, and, with any luck and justice, brought to trial. It is a measure of how Bush and by extension America is distrusted that almost every knowledgeable writer expects another terrorist attack on US soil. Politico refers to Bush as “on his way out”. Yet –another attack will give Bush the cover he needs to cancel elections and, in effect, complete a fascist coup d’etat!

A war crimes trial of any American should be a wake up call for Americans. Former Marine Corps Commandant, Gen. Paul X. Kelley reminded in the Washington Post:

“Violations of Common Article 3 are ‘war crimes’ for which everyone involved — potentially up to and including the president of the United States — may be tried in any of the other 193 countries that are parties to the conventions.”

I was not surprised by recent reports citing a declassified memo authored by JD lawyer/talk show pundit John Yoo. It bluntly favored sweeping, perhaps unlimited, presidential authority to order torture. A fuzzy cheeked idiot in my Congressman’s office had made the same argument to me with regard to a bill sponsored by Tom DeLay. The House Bill authorized Bush to carry out various war crimes and exonerated him in advance for numerous offenses which he clearly had intended to commit. I object to this utter disregard for America’s international obligations under international law. My Congressman’s aid said that the treaties meant nothing! In other words, I replied, America’s word means nothing so long as Bush occupies the White House! My opinion of the Bush regime has been confirmed daily since that time.

The Bush administration planned to commit war crimes from the outset of the administration, perhaps even earlier. Long before 911, Bush prepared legislation that would exempt US troops from war crimes prosecution at the Hague, specifically, violations of the Geneva Conventions later violated at Abu Ghraib. The measure positioned Bush in advance to exploit the crime of 911, though it had not yet happened. To this end, Bush sought Congressional authorization to go to war with the Netherlands should US troops find themselves on trial for war crimes at the Hague!

The bill authorized Bush “…to use all means (including the provision of legal assistance) necessary to bring about the release of covered US persons and covered allied persons held captive by or on behalf of the Court [International Criminal Court, ICC, in the Hague]. Some highlights:

The President is authorized to invade The Hague. Specifically, the bill empowers Bush to use all means necessary and appropriate to bring about the release from captivity of US or Allied personnel detained or imprisoned against their will by or on behalf of the Court.

No US governmental entity –including State or local governments and court of any US jurisdiction –may cooperate with the ICC in arrests, extraditions, searches and seizures, taking of evidence, seizure of assets, or similar matters.

No ICC agent may conduct any investigation in the US.

No classified national security information can be transferred directly or indirectly to the ICC or to countries Party to the Rome Statute.

These provisions are in addition to existing US law (the 2000-2001 Foreign Relations Authorization Act) which prohibits any US funds going to the ICC once it has been established unless the Senate has given its advice and consent to the Rome Treaty.

This measure was introduced before 911 in anticipation of a ‘War on Terrorism’ that only those with guilty foreknowledge could have anticipated, a ‘war’ that would include US aggression against Afghanistan and Iraq. Certainly no one but Bush, Dick Cheney, Tom Delay, the Project for the New American Century and high level members of the Bush administration could have anticipated the improbable series of events leading to the American quagmire in Iraq. Certainly, they are not ‘psychic’ despite a mantra repeated ad nauseam post 911: “No one could have foreseen….”! In fact, only the Bush administration ‘foresaw’ 911 in such detail, that they planned in advance to make legal the very laws they have in fact violated in the post-911 world. What incredible coincidences!

Certainly, no one but Bush –or those who had planned to help him perpetrate them –would have or could have foreseen that US atrocities at Abu Ghraib, GITMO and a gulag archipelago of US torture centers throughout eastern Europe would have necessitated measures in advance to get them off the hook, measures that would put Bush, US brass and members of his criminal junta above the law! This measure amounts to a criminal administration positioning itself –in advance –to exploit the crime of 911. It is more evidence that 911 was anticipated. It is evidence that 911 was an inside job.

It is evidence that the Bush administration was far better equipped and prepared to supervise the events of 911 from inside Dick Cheney’s bunker than was the rag tag, improbable and outlandish ‘conspiracy’ of 19 Arab hijackers –none of whom could fly a 757! Because Bush had planned in advance, his administration moved forward with plans to attack Afghanistan months before 911 as negotiations with the Taliban broke down. As for Iraq, Dick Cheney’s Energy Task Force had already carved up Iraq oil booty among the robber barons of big oil: Halliburton, Enron, et al! Bush and Cheney conspired to commit the grand theft of a nations oil and, in the process, mass murder.

Bush would soon have his first chance to exploit what the Project for the New American Century [See: PDF: Rebuilding America’s Defenses] would call a ‘catalyzing event’ like Pearl Harbor.

Courts in Italy and Germany already have issued warrants demanding the arrest of CIA operatives for illegally kidnapping and allegedly torturing citizens and residents of their nations. More than 30 US citizens have been named, their CIA covers blown. These warrants have not been executed, primarily for diplomatic reasons. But they could be acted upon rapidly with a simple decision by either government. And other names — of those directly involved in “enhanced interrogation techniques” [bloody torture] — are starting to emerge overseas.

Under the precedent of the Nuremberg trials, even making such an argument exposes Yoo, along with others — including federal Judge Jay S. Bybee, a former Bush administration Justice Department official, or former Attorney General Alberto Gonzales — to war crimes indictments.

I encourage the International Courts to indict George W. Bush himself for having ordered a campaign of capital crimes i.e, wars of naked aggression in which millions are now dead as a result. If that’s not a crime in this world, then nothing is. If the ICC will proceed, I will happily assist them in the preparation of its case.

Source, with Addendum / Extistentialist Cowboy
Thanks to Jim Baldauf / The Rag Blog