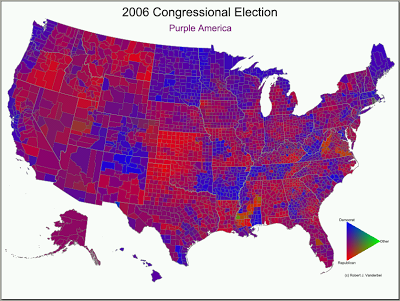 Purple America / Contested South. Graphic from Facing South.
Emerging demographic trends differentiated Florida, Virginia and North Carolina from the rest of the south sufficiently to overcome any ‘Bradley Effect’ and shift them into the Democratic column.
By Jay D. Jurie / The Rag Blog / November 22, 2008

On November 3rd I sent out an e-mail predicting that McCain would narrowly take Florida (see below). As we’ve seen, Obama took not only Florida, but also Virginia and North Carolina.

Emerging demographic trends differentiated these three states from the rest of the south sufficiently to overcome any “Bradley Effect” and shift them into the Democratic column.

An article entitled “A New South Rising” on the Institute for Southern Studies Facing South blog [see below] does a good job analyzing the trends, including: urbanization, young white southerners with a different outlook than previous generations, stronger minority voter turn-out, and a growing Latino population.

Other southern states are experiencing these trends. Given the region’s high population growth, the political significance of the south will increase.

I am glad to have been wrong about the election outcome.

Not to rain on anyone’s parade, and I hope otherwise, but my prediction is that McCain is going to win Florida.

It’ll be close. Maybe not as close as the 2000 election, but very close.

Based on a Mason-Dixon poll, this morning’s Orlando Sentinel shows Obama slightly ahead: 47% to 45%, an error margin of 4%, and 7% undecided. This is a fairly large “undecided” factor with early voting well under way in Florida. 84% of the 7% undecided are white, and I think this is where the so-called “Bradley effect” is hiding.

There are still voter intimidation and suppression shenanigans which may play out on Tuesday as well.

Obama has been waging a very strong and effective campaign in Florida, much stronger than either Gore in 2000 or Kerry in 2004. If Obama loses the state, it won’t be his fault. We’ll see.

A New South Rising
2008 proved that the South is politically competitive and growing in importance. But the pundits are telling a different story.

On the day before Election Day — that final moment when candidates decide where they want to make their last case to the voters they want to win the most — Barack Obama chose to visit three big battleground states: Florida, North Carolina and Virginia.

Since 1968, these Southern states had voted Democratic for president only six times between them. And president-elect Obama was about to ask voters in these states — all members of the old Confederacy — to vote the first African-American ever into the White House.

Obama’s Southern Strategy worked: the states went blue, and history was made.

But just as Southern Democrats were clinking glasses of sweet tea in celebration, the powerhouses of political punditry — especially in the North — made a bizarre move: They turned against the region that had just given one-third of its Electoral College votes to the President-elect.

Ignoring McCain’s dominance in, say, the Great Plains and Upper Mountain states — Obama’s most crushing defeats came in Idaho, Oklahoma, Utah and Wyoming — legions of commentators instead curiously trained their guns on the South, dismissing the region as politically irrelevant, a bastion of red-state conservatism uniquely out of touch with national trends.

Read all of this article here / Facing South: The Online Magazine of the Institute for Southern Studies.

This entry was posted in Rag Bloggers and tagged 2008 Elections, Florida, Obama Campaign, the South, Voting Trends. Bookmark the permalink.