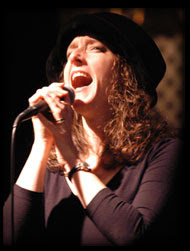 I learned of Kelley Johnson rather accidentally when I was leaving for Austin the next day and needed some dinner and (I hoped) good music. Found both at a little club in Belltown, Seattle named Tula’s. Kelley is a joy live, easy with her audiences, a great stage presence and voice. She has four albums out. Here is Make Someone Happy, from the album of the same name.

Kelley Johnson reaches her audience with storytelling, subtlety, soulfulness and swing. Twice chosen to be a Musical Ambassador abroad, her quartet auditioned live and was chosen by Wynton Marsalis and Lincoln Center in 2007, and the Kennedy Center in 2004 for lengthy tours for the US State Department. Kelley is the 2003 first place winner of the International Jazzconnect Vocal Competition, and the Jazz Education Journal listed her “Live at Birdland” as a Blue Chip Jazz Vocal album of 2004. Most recently, the CD recording “Music is the Magic” with it’s passionate world-view and original spoken-word, rose to#15 on the national jazz radio chart, Jazzweek. Kelley’s lithe velvety voice mixes with a feisty delivery, tricky colorful arrangements and spirited players like Geoffrey Keezer, Ingrid Jensen, John Hansen, and Brian Lynch. The result is music that is personal and moving.

Kelley Johnson grew up all over the place, but mostly she grew up in Ironwood, Michigan. Surrounded by the sounds of music, her mother was a painter who filled the studio with the music of the 60s, 70s, R&B, country, jazz and especially the blues. When her mother was severely injured in a tragic auto accident, her family took in boarders to make ends meet. Among their guests were singers, songwriters, actors, and comedians who introduced Kelley to more music. Around the time that she and her mother and sister moved to Milwaukee, Wisconsin, she began to absorb Billie and Miles records. “Jazz had become a beacon for me”, she says. She began hanging out at Milwaukee’s Jazz Gallery learning the vernacular from Brian Lynch, David Hazeltine and the cats while studying Betty Carter five nights in a row on her annual visit to town. Her education grew to be both formal (Magna Cum Laude from the Wisconsin Conservatory of Music) and informal (gigging in Milwaukee jazz clubs). This two-fold education and her subsequent career experience produced a schooled musician who was growing into a jazz singer.

Read the rest of her bio here. And here is Kelley’s Web site.