Supremes : Guantanamo Detainees DO Have Rights 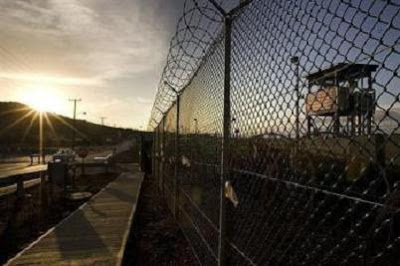 WASHINGTON — The US Supreme Court Thursday ruled Guantanamo prisoners have the right to challenge their detention at the US military base in civilian courts, dealing a stiff rebuke to the Bush administration.

“The laws and constitution are designed to survive, and remain in force, in extraordinary times,” the court said in its historic ruling, for the third time in four years striking down the government’s case for trying “war on terror” suspects in military tribunals.

“Liberty and security can be reconciled; and in our system they are reconciled within the framework of the law,” the court added, ruling that prisoners in the remote US jail in southern Cuba “have the constitutional privilege of habeas corpus.”

By a vote of five to four, the court found that even if the base was officially on Cuban territory, it was in fact operating as if it were on American soil.

Thursday’s ruling should now give the prisoners and their legal teams the right under the constitution to demand to know on what basis they are being held.

So far the administration of President George W. Bush has refused to unveil the body of evidence to justify the prisoners’ continued detention, arguing it would be against the interests of national security.

Detainees have long protested that they had been mistreated, and have questioned the very legality of the Guantanamo military tribunals, which the administration has said will try the cases of 80 prisoners instead of civilian courts.

The Supreme Court took up the issue of Guantanamo inmates in 2004 and again in 2006, ruling both times that detainees had a statutory — legal but not constitutional — right to contest their indefinite detention before an independent judge, a legal process known as habeas corpus.

But, urged by the Bush administration, Congress in 2006 passed new legislation that forbade them from seeking justice in a federal court until they are judged by a special military tribunal.

It was not immediately clear how Thursday’s ruling would affect those 270 detainees still held in the jail.

Australian David Hicks is the only “war on terror” detainee to have so far been sentenced at Guantanamo after pleading guilty in a deal with US authorities which allowed him to serve out the remaining nine months of his sentence at home.

The most important trial of five alleged suspects in the September 11, 2001 attacks is not due to get fully underway until the summer, after they were read the charges against them at a hearing last week.

The first detainee who could be affected is Yemeni Salim Hamdan, accused of being the driver and personal bodyguard of the leader of the Al-Qaeda terror network, Osama bin Laden.

Since the camp was opened in January 2002 to deal with the suspects rounded up in the US “war on terror” it has under gone major changes.

Two-thirds of the 800 prisoners who have passed through its barbed-wire gates have been freed, mostly without charge, after several years in captivity.

But the remaining prisoners are often held in solitary confinement, allowed little contact with their families and the outside world, and have no certainty about their fate.

Four detainees have committed suicide, and hunger strikes are frequent, leading to the force feeding of prisoners by their military guards.

The initial open air cages, which triggered a storm of international criticism, have long been emptied and today have returned to grass and the native iguanas.

And most of the prisoners, even those which the US authorities have said could be freed, are now housed in modern cells modelled on those in US high-security jails.

Both candidates to succeed Bush in the November elections, Republican John McCain and his Democratic rival Barack Obama have said they will close the prison.

The White House has also repeatedly said it would shut Guantanamo down, but has failed so far to come with an alternative, or to find countries willing to take some prisoners, such as Muslim Uighurs from northwest China, who face repression at home.