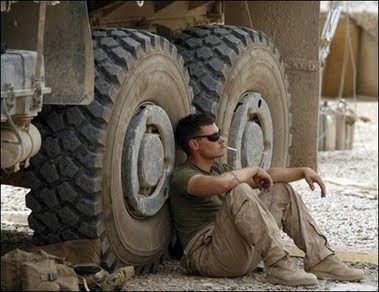 U.S. marine at a military camp in Fallujah. Photo by Roslan Rahman / AFP.
Public opinion strong against war:
Afghan nation-building is ‘lost cause’

Right after the 9/11 tragedy there was a great desire to strike back at the criminals who destroyed the Twin Towers and killed thousands. We knew at the time that the culprits were members of a shadowy group of fanatics called al-Queda, but you can’t use military power to attack a group of terrorists that move from country to country to save themselves and carry out their nefarious plans. We should have used the FBI and the CIA to fight these terrorists, two groups that are trained to deal with criminals and criminal groups.

But the American government (and most of the people) wanted to make a show of attacking those responsible, and nobody puts on a show of power like the United States military. Since the Taliban, who ruled Afghanistan, were known to support al-Queda and had allowed them to set up training bases in that country, the Bush administration decided to make an example of that country. They would kick the Taliban out and do a little democratic nation-building. After all, didn’t the first Gulf War prove no one was a match for our military?

The problem was the government forgot the lessons of history — lessons that were learned hard in the bloody jungles of Vietnam (our first disastrous effort at nation-building). While it was true that our military demonstrated superiority in the first Gulf War, that was a limited conventional warfare against another nation’s military — not an effort at nation-building (and the Iraqi government was left in power).

Nation-building is a different matter, and we showed in Vietnam that we are not very good at it (and I doubt that any other country is either). You simply can’t force another country and its people to adopt the government you want them to have by using military power, especially when you have a problem distinguishing between enemy combatants and innocent civilians. It turns out that that is just as difficult in the mountains and deserts of Afghanistan as it was in the jungles of Vietnam.

There is little doubt that George Bush mismanaged the war in Afghanistan (by withdrawing many troops before the fighting was over and sending them to Iraq), but even if he hadn’t made that mistake it is doubtful that our military could be successful in the Afghan nation-building effort. We replaced a group of religious criminals with a gang of corrupt criminals and then expected the Afghan people to thank us for that. They didn’t. They fought back as we killed innocents and created more enemies than we killed.

Now we find our country engaged in what seems to be an endless war in Afghanistan. And we are accomplishing nothing. After we clear an area of combatants and move to another area to do the same, the enemy returns to the first area. The only thing that was accomplished was a loss of life on both sides and among innocent civilians. In spite of our best efforts, it still looks like the Taliban hasn’t been eradicated, can’t be eradicated, and will probably take over the country again if we ever leave.

It has taken the American people a long time to realize this truth, but they finally have. A recent Bloomberg Poll shows that a clear majority of Americans now believe than the war in Afghanistan is a lost cause — a futile military effort that cannot result in victory. The poll, conducted October 7th through October 10th, has a maximum margin of error of 3.7%.

When the people were asked if America can win the Afghan War or whether it is a lost cause, the following answers were received:

Those numbers are not even close. We are not only not winning the Afghan War, the American people no longer believe it can be won. Why then, does the government plan to keep on fighting this “lost cause” war for at least another 15 months (and the military is already saying they want to stay even longer)?

Some might think that admitting the truth and coming out for an immediate withdrawal of troops from Afghanistan would cost a politician votes. But this poll shows that is not true either. In fact it might actually help a candidate to have that position in the coming election.

Here are the results when the people were asked if they would be more or less likely to vote for a candidate who supports withdrawing U.S. troops from Afghanistan, regardless of whether conditions are getting better or worse:

Since the numbers far exceed the margin of error on both questions, it leaves me wondering why we continue this silly war. Here are the facts:

Considering those facts, it doesn’t make sense to go on fighting this ridiculous war. President Obama has promised to end this war at the end of 2011 — maybe. That’s a mistake. He should withdraw all American troops immediately (and while he’s at it, withdraw the rest of our troops from Iraq). Delaying will only cost more American and Afghan lives while accomplishing nothing.