The Amnesty International Report on the Gaza War: Where Is World Outrage?

Israeli forces killed hundreds of unarmed Palestinian civilians and destroyed thousands of homes in Gaza in attacks which breached the laws of war, Amnesty International concluded in a new report published on Thursday. Operation ‘Cast Lead’: 22 days of death and destruction, is the first comprehensive report to be published on the conflict, which took place earlier this year.

“Israel’s failure to properly investigate its forces’ conduct in Gaza, including war crimes, and its continuing refusal to cooperate with the UN international independent fact-finding mission headed by Richard Goldstone, is evidence of its intention to avoid public scrutiny and accountability,” said Donatella Rovera, who headed a field research mission to Gaza and southern Israel during and after the conflict. 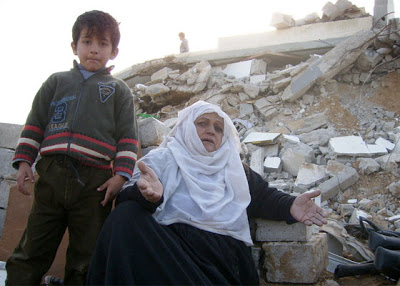 A woman and a child made homeless after the destruction of their home, Gaza, January 2009. Photo © Amnesty International.
“The international community, led by the UN Security Council, must use all its leverage to ensure that Israel cooperates fully with the Goldstone inquiry, which now offers the best means to establish the truth.”

The Amnesty International report documents Israel’s use of battlefield weapons against a civilian population trapped in Gaza, with no means of escape and is based on evidence gathered by Amnesty International delegates, including a military expert, during field research in January and February.

The scale and intensity of the attacks on Gaza were unprecedented. Some 300 children and hundreds of other unarmed civilians who took no part in the conflict were among the 1,400 Palestinians killed by Israeli forces.

Most were killed with high-precision weapons, relying on surveillance drones which have exceptionally good optics, allowing those observing to see their targets in detail. Others were killed with imprecise weapons, including artillery shells carrying white phosphorus – not previously used in Gaza – which should never be used in densely populated areas.

Amnesty International found that the victims of the attacks it investigated were not caught in the crossfire during battles between Palestinian militants and Israeli forces, nor were they shielding militants or other military objects. Many were killed when their homes were bombed while they slept. Others were sitting in their yard or hanging the laundry on the roof. Children were struck while playing in their bedrooms or on the roof, or near their homes. Paramedics and ambulances were repeatedly attacked while attempting to rescue the wounded or recover the dead.

“The deaths of so many children and other civilians cannot be dismissed simply as ‘collateral damage’, as argued by Israel,” said Donatella Rovera. “Many questions remain to be answered about these attacks and about the fact that the strikes continued unabated despite the rising civilian death toll.”

More than 3,000 homes were destroyed and some 20,000 damaged in Israeli attacks which reduced entire neighbourhoods of Gaza to rubble and left an already dire economic situation in ruins. Much of the destruction was wanton and could not be justified on grounds of “military necessity”.

The Israeli army has not responded to Amnesty International’s repeated requests over the past five months for information on specific cases detailed in the report and for meetings to discuss the organization’s findings.

“For its part, Hamas has continued to justify the rocket attacks launched daily by its fighters and by other Palestinian armed groups into towns and villages in southern Israel during the 22-day conflict. Though less lethal, these attacks, using unguided rockets which cannot be directed at specific targets, violated international humanitarian law and cannot be justified under any circumstance,” said Donatella Rovera.

In addition to locally made Qassam rockets, Palestinian militants often fired longer-range Grad-type rockets smuggled into Gaza via the tunnels on the Egyptian border, which reached deeper into Israel and placed many more Israeli civilians at risk.

“Five months on, neither side has shown any inclination to change its practices and abide by international humanitarian law, raising the prospect that civilians will again bear the brunt if fighting resumes,” said Donatella Rovera.

“Those responsible for war crimes and other serious violations must not be allowed to escape accountability and justice,” said Donatella Rovera.

Among other recommendations, the report calls on states to suspend all transfers of military equipment, assistance and munitions to Israel, Hamas and other Palestinian armed groups until there is no longer a substantial risk that such equipment will be used to commit serious violations of international law.

It calls on Israel to commit not to carry out direct, indiscriminate or disproportionate attacks on civilians; or use artillery, mortars and white phosphorus weapons in densely populated areas; and to end its blockade on the Gaza Strip, which is collectively punishing the entire population.

The report urges Hamas to renounce its policy of unlawful rocket attacks against civilian population centres in Israel and to prevent other armed groups from carrying out such attacks.

3 Responses to The Amnesty International Report on the Gaza War: Where Is World Outrage?