The Bookselling Magic of Hugo Chavez 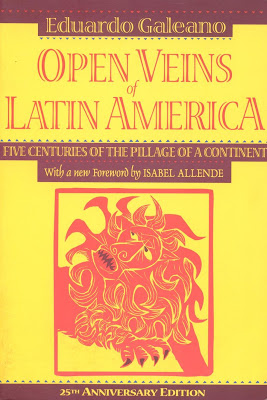 Two days ago, Amazon.com had Open Veins of Latin America rated at 54,295 in sales. By Sunday night, the book had jumped all the way up to number two…

It’s beginning to look like the quickest way to make a book a bestseller is to have it recommended by Venezuelan President Hugo Chavez. Three years ago, Chavez made a speech to the United Nations and made mention of a book by Noam Chomsky titled Hegemony or Survival.

Within days, the book by Chomsky became the number one bestseller at Amazon.com, and bookstores in the U.S. and Europe sold out and ordered tens of thousands of copies from the publisher. Now it looks like it is happening again.

During the Summit of the Americas, Hugo Chavez gave President Obama a book. It was Open Veins of Latin America: Five Centuries of the Pillage of a Continent by Uruguayan author Eduardo Galeano. The book is about the impact of foreign intervention in Latin America, from the Spanish conquest 500 years ago to modern times.

President Chavez told reporters, “This book is a monument in our Latin American history. It allows us to learn history, and we have to build on this history.”

Two days ago, Amazon.com had the book rated at 54,295 in sales. By Sunday night, the book had jumped all the way up to number two in sales at Amazon.com.

It looks like the Venezuelan leader has the golden touch when it comes to selling books.

Find Open Veins of Latin America: Five Centuries of the Pillage of a Continent by Eduardo Galeano, on Amazon.com

This entry was posted in RagBlog and tagged Books, Hugo Chavez. Bookmark the permalink.

1 Response to The Bookselling Magic of Hugo Chavez