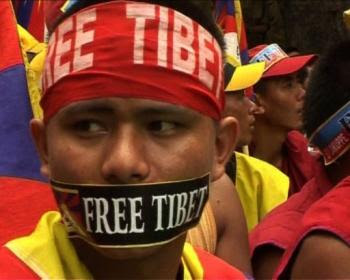 Tibetans protest in India ahead of Olympics.
Demonstrations ‘pressure Beijing over its rule of Tibet and heavily Muslim Xinjiang province, the arrests of dissidents, Internet censorship and concerns about Chinese foreign policy’
August 8, 2008

PARIS – Police banned demonstrations outside the Chinese embassy in Paris on Thursday but critics of China’s human rights record stepped up protests elsewhere in the world to mark the start of the Beijing Olympics.

Police in the French capital said they did not want a repeat of the “violent disturbances” that broke out in April when the Olympic torch passed through Paris, when activists angry at China’s crackdown in Tibet disrupted the route.

They banned any protests outside the embassy on Thursday and Friday, when the Games officially open, including a demonstration planned Friday by a coalition including media watchdog Reporters Without Borders.

RSF is challenging the ruling in court, and a separate rally at the Trocadero plaza near the Eiffel Tower will still go ahead as planned at 1:00 pm (1100 GMT) Friday, to coincide with the Olympic opening ceremony in Beijing.

China has painted the Games as a celebration of three decades of economic reforms and hopes the event will showcase a rapidly modernising country.

But activists across the world are using the Games
A total of 127 athletes, including more than 40 competing in the Games, have called on China’s President Hu Jintao to seek a peaceful solution to the Tibet issue and improve the rights situation, according to an open letter posted online.

In Washington, scores of activists protested in front of the Chinese embassy, shouting “Beijing Olympics, Genocide Olympics,” “China lie, People die” and “Stop the killing in Tibet, Stop the Killing in East Turkestan.”

“The Beijing Games is supposed to reflect peace and human rights but the Chinese government is continuing its crackdown on our innocent people, detaining and executing them,” charged Rebiya Kadeer, the exiled leader of Uighurs in Xinjiang, a vast area that borders Central Asia.

Uighurs, a Turkic-speaking people, have expressed anger at what they say has been decades of repressive communist Chinese rule in Xinjiang.

Security was tight with policemen and police cars lined up in front of the embassy.

Jo Jinhae, a 21-year old North Korean who fled to the United States, was on her sixth day of a hunger strike Thursday in front of the embassy, protesting Beijing’s forced repatriation of North Korean refugees from China.

“The human rights abuses of North Korean refugees must stop,” said Jo, who had been jailed four times in North Korea after being repatriated from China. She said she had been informed her three brothers had died on repatriation.

In Ottawa, some 300 protestors demonstrated against rights violations for a second consecutive day in front of the Chinese embassy.

Five people had briefly chained themselves to the gates of the embassy the previous day.

On Thursday, they were joined by a former beauty queen and members of Parliament, as well as groups pressing for Tibet independence, democracy in Myanmar, peace in Sudan and press and religious freedoms.

In India, home to more than 100,000 Tibetan refugees including the Dalai Lama, about 1,000 Tibetans staged a march in New Delhi, carrying Tibetan flags and shouting “Say no to Beijing Olympics” and “No Olympics in China.”

In neighbouring Nepal about 600 Tibetans were detained after they clashed with police while protesting in Kathmandu, police and eyewitnesses said.

About 1,500 Tibetan exiles had gathered in the city to demonstrate against the Chinese crackdown in Tibet. The clashes broke out after monks and nuns praying and chanting mantras refused to disperse.

In Beijing itself, three US Christians were forcefully dragged from Tiananmen Square — scene of a 1989 massacre of pro-democracy protesters — as they prayed publicly, according to a statement on their behalf.

On Wednesday, two US and two British activists had staged a dramatic protest in the city, unveiling giant “Free Tibet” banners near the stadium where the Games will open– a move that got them immediately deported, their group said.

In London the Free Tibet campaign was due to hold a protest in front of the Chinese embassy on Friday. They planned to unveil Tibetan flags there at 1208 GMT — the moment when the Olympics officially kick off.

1 Response to Worldwide Protests On Eve of China Olympics