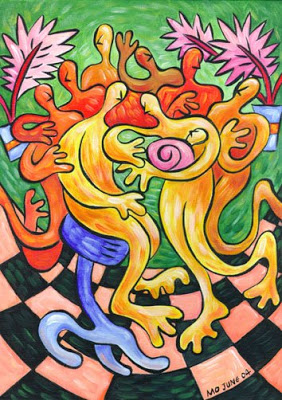 New Start / mogallery.com.
‘Millions have been newly engaged and motivated as a result of the recent electoral process and most are not traditional players who automatically buy in to the traditional assumptions.’
By Thorne Dreyer / The Rag Blog / November 20, 2008

History has taken an unexpected turn and, astounding as it may seem to those of us made numb by decades of disappointment, the possibility of building a viable progressive movement is before us.

Millions have been newly engaged and motivated as a result of the recent electoral process and most are not traditional players who automatically buy in to the traditional assumptions. Add to that the critical and tantalizing fact that these people need not fall back into the woodwork thanks to the unprecedented communications networks that we now have at our disposal.

The emergence and consolidation of a serious progressive movement is nowhere near a given, and we certainly have a tradition of blowing it — especially through turning in on ourselves rather than intelligently identifying and directing our energies at the real enemy — but we’d be fools not to bust our butts trying to make it happen.

We must recognize and be tolerant of our differences in ideology and approach, but we must also recognize that our only power is in unity. It is not only our right but our responsibility to address the Obama presidency with a critical eye; we must always hold Obama accountable to a progressive vision.

But we must likewise be supportive and leave the Obama-bashing to those who are best at it — the rabid right. The resurgent clout of the racists and the fear-mongers will be underestimated only at our serious peril.

The crises we face now scream of catastrophic potential and there may not be another chance.

Rag Blog reading list on the task at hand (much more to come):

I highly recommend that everyone read Carl Davidson’s Bumpy Road Ahead: Obama and the Left posted on The Rag Blog Nov. 18, 2008.

Few of us will agree with every word, but I believe it to be a bold and thoughtful beginning. Please join in the discussion by clicking the “comments” at the end of this (and every) post.

Other articles recently published on The Rag Blog that analyze the election from a left perspective and address the question of the day: what do we do now?

Ayers Seems Relieved That the Election is Over by Bill Ayers / Nov. 7, 2008

Ron Ridenour on Obama : Conditional Hope from Across the Seas by Ron Ridenour / The Rag Blog / Nov. 6, 2008

[Thorne Dreyer was a pioneering underground journalist in the sixties and seventies and was active with SDS in Texas and nationally. He lives in Austin where he works with MDS/Austin and Progressives for Obama. A writer, editor and bookseller, he is a contributing editor to Next Left Notes and is co-editor of The Rag Blog.]