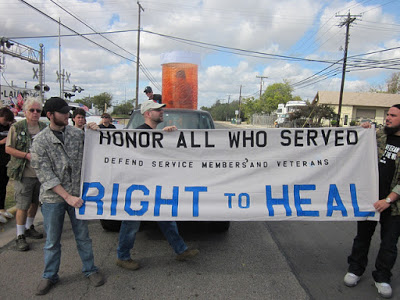 Defend the right to heal:
Veterans’ Day parade in Killeen

As the deployments wind down from this decade of combat, service members are finding that their access to medical care is restricted, denied, delayed, and stigmatized.

See story by Terry J. DuBose and photos by Alice Embree and Susan Van Haitsma, Below.

Malachi Muncy’s vision was obscured, but he could hear a boy’s voice saying: “It’s a soldier in a pill bottle. Break out! Break out!”
The boy, a spectator along the Veterans Day parade route in Killeen, Texas, got it. So did most of those who saw Under the Hood’s message on Saturday, November 10.

Under the Hood (UtH) is a GI coffeehouse that opened in 2009 in Killeen, a mile from Fort Hood, the largest U.S. military post in the world. The UtH contingent marched for the second time in Killeen’s Veterans’ Day event. Three veterans led the march with this banner: “Honor All Who Served: Defend Service Members’ and Veterans’ Right to Heal.”

Behind the banner, on the bed of a pickup truck, was Malachi Muncy, a veteran of two Iraq deployments, a writer and an artist. Malachi had produced the pill bottle image as a print on paper made of combat uniforms. For the parade he took his art large, constructing a six-foot tall orange pill bottle with a white cap. Malachi, in uniform, stood inside the bottle, occasionally reaching his hands above him into the air. The prescription read: “RX: We Deserve Better.”

Although Malachi’s vision was somewhat limited by the orange acetate he was behind, he could hear the crowd’s response. Those seated along the parade route would begin asking each other what was on the truck, then talk amongst themselves as they realized it was a soldier in a pill bottle. There was occasional laughter, even applause. Some spectators made comments about the medicines they were on.

Along the route, UtH supporters handed out leaflets supporting soldiers’ right to heal — for real treatment beyond pills for the hidden injuries that are now so prevalent — Post Traumatic Stress Disorder, Military Sexual Trauma, and Traumatic Brain Injury.

Supporters also carried signs with the grim markers of this decade of war. “A veteran commits suicide every 80 minutes. Stop the cycle!” “There were 154 service member suicides in the first 155 days of this year. 154 suicides vs. 134 combat deaths.”

In an October 23 article, the Austin American-Statesman dug deep into the Texas face of these statistics: “Special Report: Uncounted Casualties,” reporting on the recent Texas veterans who have died of overdoses, suicide, and vehicle crashes.

As the deployments wind down from this decade of combat, service members are finding that their access to medical care is restricted, denied, delayed, and stigmatized. An appeal to Congress for redress for service members’ and Veterans’ right to heal can be found at www.RighttoHeal.org. You are urged to sign this petition and to continue to support Under the Hood — a space for free speech, peer support, and decompression. 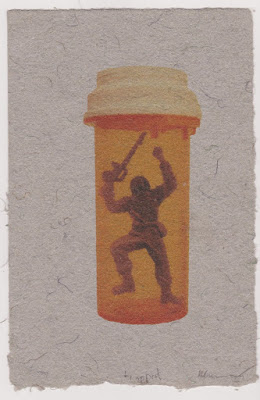 “Trapped.” Print by Malachi Muncy on paper made from old combat uniform.

Malachi Muncy, a veteran of two deployments to Iraq, uses art and theater to express his frustration, situation, and anger. Two of his prints, “Trapped” and “Escape,” carry strong messages in this era of record suicide rates among troops and veterans.

Malachi prints on paper made from his combat uniforms. As guerrilla theater for the Veterans’ Day Parade in Killeen, Malachi designed and built a giant pill bottle. Standing in uniform in the bottle on the back of a pickup truck his art reached hundreds along the parade route.

Malachi served in the Texas Army National Guard as a motor vehicle operator from 2003 to 2009, with service in Iraq from 2004-2005 and 2006-2007. He has a BA in journalism form Texas State University (TSU) and is currently pursuing a BA in English.

Malachi’s writing has appeared in the Copperas Cove Leader Press, SKUNK Magazine, and at RawStory.com. His poetry and prose have been included in the Warrior Writers anthologies. Malachi’s print and papermaking artwork has been exhibited at The National Veterans Art Museum in Chicago.

Malachi has volunteered as arts coordinator at Under the Hood Café, a GI Outreach Center in Killeen. He has conducted workshops there on making “combat paper” from uniforms — transforming war experiences into art. In December he will become the new manager of Under the Hood.

[Terry J. DuBose, who was an organizer for Vietnam Veterans Against the War (VVAW) in Texas, is an Associate Professor Emeritus of Diagnostic Medical Sonography at the University of Arkansas for Medical Sciences.] 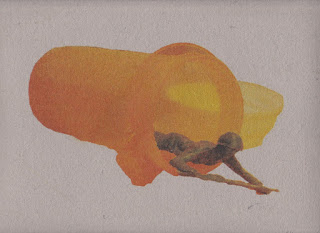 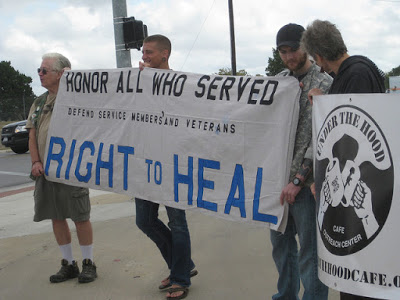 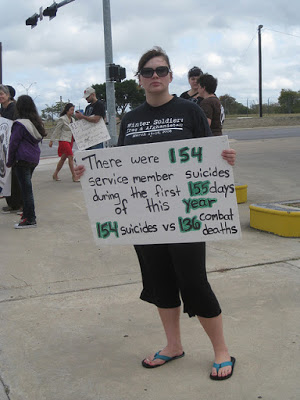 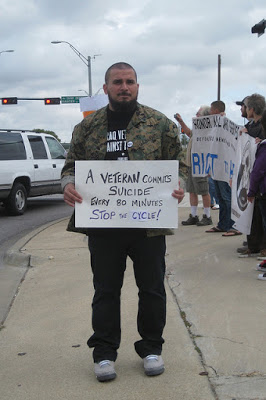 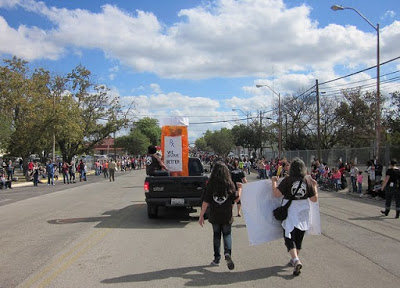 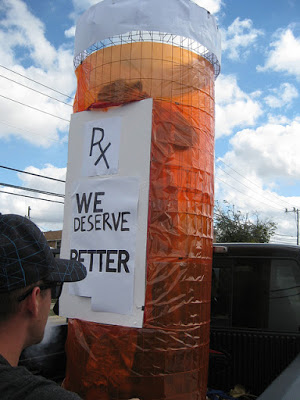 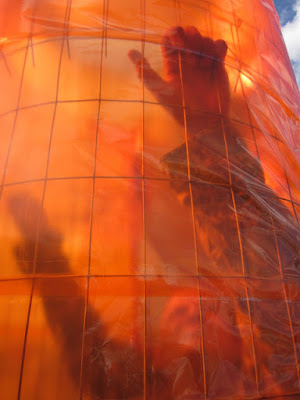 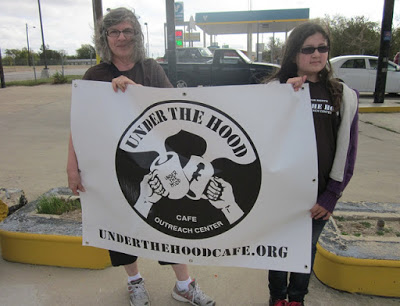 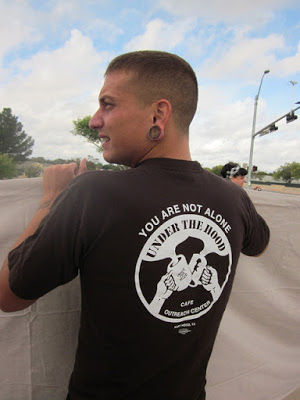 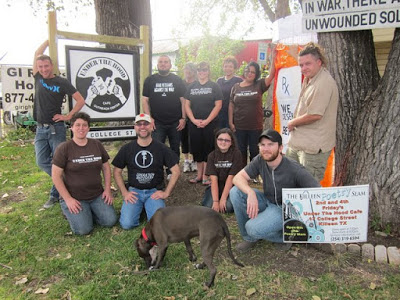 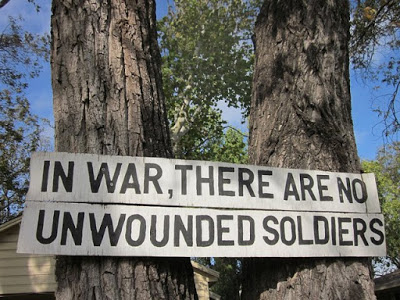 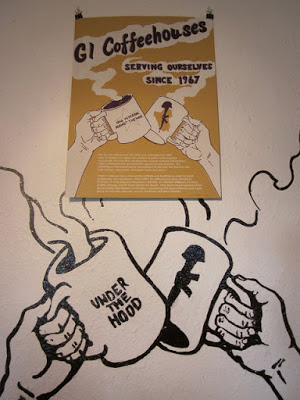 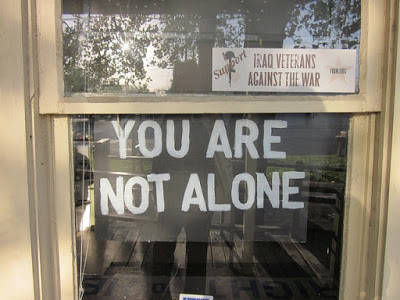 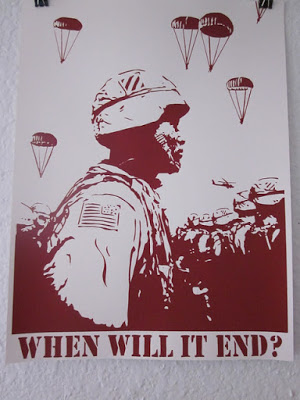 Find more photos of Under the Hood and the Veterans Day parade by Alice Embree and Susan Van Haitsma.