Alice Walker : Why I’m Joining the Freedom Flotilla to Gaza 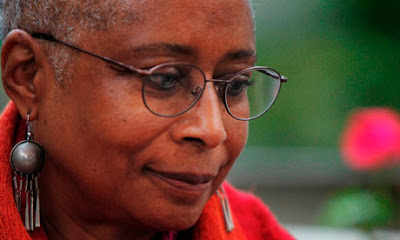 Poet and Pulitizer Prize-winning novelist Alice Walker in Gaza City in 2009. Photo from AP / The Guardian (U.K.).
Why I’m joining the Freedom Flotilla to Gaza

Pulitzer prize-winning American writer Alice Walker is on board an international flotilla of boats sailing to Gaza to challenge the Israeli blockade. Here she tells why.

See ‘After the excitement of the Arab Spring, has the Palestine issue slipped out of view?’ by Emine Saner, Below.

Why am I going on the Freedom Flotilla II to Gaza? I ask myself this, even though the answer is: what else would I do? I am in my 67th year, having lived already a long and fruitful life, one with which I am content. It seems to me that during this period of eldering it is good to reap the harvest of one’s understanding of what is important, and to share this, especially with the young. How are they to learn, otherwise?

Our boat, The Audacity of Hope, will be carrying letters to the people of Gaza. Letters expressing solidarity and love. That is all its cargo will consist of. If the Israeli military attacks us, it will be as if they attacked the mailman. This should go down hilariously in the annals of history. But if they insist on attacking us, wounding us, even murdering us, as they did some of the activists in the last flotilla, Freedom Flotilla I, what is to be done?

There is a scene in the movie Gandhi that is very moving to me: it is when the unarmed Indian protesters line up to confront the armed forces of the British Empire. The soldiers beat them unmercifully, but the Indians, their broken and dead lifted tenderly out of the fray, keep coming.

Alongside this image of brave followers of Gandhi there is, for me, an awareness of paying off a debt to the Jewish civil rights activists who faced death to come to the side of black people in the American South in our time of need. I am especially indebted to Michael Schwerner and Andrew Goodman who heard our calls for help — our government then as now glacially slow in providing protection to non-violent protesters — and came to stand with us.

They got as far as the truncheons and bullets of a few “good ol’ boys'” of Neshoba County, Mississippi and were beaten and shot to death along with James Chaney, a young black man of formidable courage who died with them. So, even though our boat will be called The Audacity of Hope, it will fly the Goodman, Chaney, Schwerner flag in my own heart.

And what of the children of Palestine, who were ignored in our president’s latest speech on Israel and Palestine, and whose impoverished, terrorized, segregated existence was mocked by the standing ovations recently given in the U.S. Congress to the prime minister of Israel?

I see children, all children, as humanity’s most precious resource, because it will be to them that the care of the planet will always be left. One child must never be set above another, even in casual conversation, not to mention in speeches that circle the globe.

I once asked my best friend and husband during the era of segregation, who was as staunch a defender of black people’s human rights as anyone I’d ever met: how did you find your way to us, to black people, who so needed you? What force shaped your response to the great injustice facing people of color of that time?

I thought he might say it was the speeches, the marches, the example of Martin Luther King Jr, or of others in the movement who exhibited impactful courage and grace. But no. Thinking back, he recounted an episode from his childhood that had led him, inevitably, to our struggle.

He was a little boy on his way home from yeshiva, the Jewish school he attended after regular school let out. His mother, a bookkeeper, was still at work; he was alone. He was frequently harassed by older boys from regular school, and one day two of these boys snatched his yarmulke (skull cap), and, taunting him, ran off with it, eventually throwing it over a fence.

Two black boys appeared, saw his tears, assessed the situation, and took off after the boys who had taken his yarmulke. Chasing the boys down and catching them, they made them climb the fence, retrieve and dust off the yarmulke, and place it respectfully back on his head.

It is justice and respect that I want the world to dust off and put — without delay, and with tenderness — back on the head of the Palestinian child. It will be imperfect justice and respect because the injustice and disrespect have been so severe. But I believe we are right to try.

That is why I sail.

[Alice Malsenior Walker is a poet, short story writer, novelist, essayist, anthologist, teacher, editor, publisher, womanist, and activist. The Chicken Chronicles: A Memoir by Alice Walker was published by Weidenfeld and Nicolson. Her critically acclaimed novel The Color Purple was awarded the Pulitzer Prize for Fiction. Walker won the 2010 Lennon/Ono Grant for Peace. This article was originally published in the British daily, The Guardian. A longer version appears on Alice Walker’s blog, alicewalkersgarden.com/blog.] 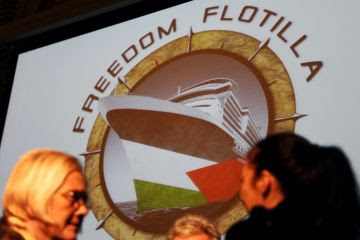 After the excitement of the Arab Spring,
has the Palestine issue slipped out of view?

Just over a year ago, in the middle of the night, Israeli commandos boarded a Turkish ship in international waters just off the coast of Israel, opened fire and killed nine activists. The Mavi Marmara was one of six ships in the Freedom Flotilla, which was attempting to break the Israeli blockade of Gaza, and the actions of Israel’s military brought widespread international condemnation.

This time, as Freedom Flotilla II sets sail over the next week, with 10 ships carrying many of the same activists who traveled last year, including Swedish writer Henning Mankell, American human rights campaigner Hedy Epstein, and writer and academic Alice Walker, the Israeli government’s response will be closely watched.

This week Ron Prosor, Israel’s ambassador to the UN, wrote a letter saying: “Israel calls on the international community to do everything in their ability in order to prevent the flotilla and warn citizens… of the risks of participating in this type of provocation.” The purpose of the flotilla, he said, is “to provoke and aid a radical political agenda.” He later added: “We are very determined to defend ourselves and to assert our right to a naval blockade on Gaza.”

“The threats of violence won’t deter us,” says Huwaida Arraf, one of the flotilla organizers. “Nobody is going in to this lightly, but we feel it has to be done. Israel has to realize its violence against us is not going to stop our growing civilian effort to challenge its illegal policies. The size of this flotilla, the number of people involved in organizing it, even after Israel killed nine of our colleagues last year, is testament to that.”

She says half a million people applied for the few hundred places: depending on how many of the 10 boats are seaworthy in time, there should be around 400 people on the flotilla.

The campaign began in August 2008, when 44 activists on two small fishing boats set off from Cyprus and managed to reach Gaza. Later that year, the Free Gaza Movement, as it became known, organized several other voyages, usually sending single boats containing small but symbolic supplies such as medicine and toys, and volunteers, including doctors, lawyers, and politicians.

Amid allegations of violence and hostility from Israel’s naval forces at sea, the activists decided they would need to send a flotilla, and after months of fundraising and negotiating with NGOs from other countries, particularly Turkey, several ships met in the Mediterranean sea in May last year with the intention of reaching Gaza.

“We didn’t make it to Gaza and we lost a lot of colleagues,” says Arraf, “but one of the things that was achieved was that people realized what Israel’s policies meant, and the violence Israel was using to maintain them. We think our action will put pressure on Israel to end its blockade on Gaza, and we hope the respective governments of all the people participating will take action and do what they should be doing, instead of having their nationals putting their lives at risk like this.”

There is a danger, says Chris Doyle, director of the council for Arab-British understanding, of the Palestinian issue being overlooked — in the west at least — as focus shifts to countries going through the extraordinary changes in the Arab Spring. “There is a danger that people forget how important this issue is, and that it is boiling. It is still an unresolved issue. At a time when international politicians — Obama, Cameron, Sarkozy, and others– are concentrating so much on other areas of the region, the issue of Palestine has not gone away.”

“Everyone has been so amazed and shocked at the beauty of the Arab revolutions, seeing these incredibly brave and wonderful citizens, that it quite naturally seizes the attention, but at the heart of the Arab revolutions is Palestine,” says Karma Nabulsi, an academic and expert on the Middle East. “I would say it hasn’t been properly covered in the west, but Palestine is central to what people — the Arab media, the people who are participating in the Arab revolutions — talk about all the time.”

So where does Palestine fit into the Arab spring? Doyle says: “A Palestinian spring is more than possible. Many senior people within Fatah and the Palestinian authorities have been saying this is the way to go because the negotiations are not seen as credible, and they will have to adopt different tactics. I think that, on the one hand, those tactics could be against the Israeli occupation, but also it represents a threat to the Palestinian authority itself, both to Fatah and Hamas.”

The flotilla “gives people heart and encouragement, that the struggle for freedom has friends and supporters,” says Nabulsi. “What the flotilla did last year, these plucky little boats, was bring the entire world to look at what [the Israeli government] were doing. Not just because of the brutality of the response of the military, but it shows how simple gestures get to the heart of the issue — breaking through the silence and the siege, and all the things that seem so big and impossible to do. They did it and they’re going to do it again, and that’s what is so remarkably brave.”

1 Response to Alice Walker : Why I’m Joining the Freedom Flotilla to Gaza