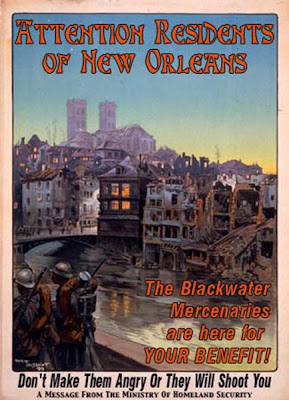 There is a great hue and cry over the May Day demonstrations in Los Angeles (legitimate) that saw the LAPD in their military gear – assaulting mostly Mexican immigrants. Nobody should suffer brutalization by the police.This has been given a great deal of coverage in the media. The thing that impressed me over the media coverage that this has been given; is that this assaulting and beating of people was being treated as if it was an anomaly! Those clubbed, gassed, shot with rubber bullets, at the conventions (Democrat and Republican) and at the various protests against treaty summits, received NONE of this outrage or an apology from the police? When you militarize local police departments and equip them with better weaponry and armor than those at war – you can expect them to treat all citizens as the ENEMY. I’m confused – is this the FREEDOM that we’re trying to export to Iraq etc?

SWAT TEAMS in the United States

In recent years, American police forces called out SWAT teams 40,000 times or more annually. What were these SWAT teams doing? They were serving routine warrants to people who posed no danger to the public. SWAT teams were once rare and used only for VERY dangerous situations, often involving hostages held by armed criminals. Today SWAT teams are deployed for routine police duties. In the United States today, 75% to 80% of SWAT deployments are for warrant service.

In a HIGH percentage of the cases, the SWAT teams forcefully enter the wrong address, resulting in death, injury and trauma to perfectly innocent people. Mostly the hundreds (documented) of these killings never make the national media and are reported only locally. 75 year old Reverend Williams (Boston) was sitting in his chair (his wife had gone to the grocery store) reading the Scriptures, when the Boston, black clad SWAT team, battered down his door without warning.

Terrified Reverend Williams ran to his bedroom, where burly SWAT police tackled him to the floor and handcuffed him. Terrified beyond imagination, he vomited and died of a heart attack! For those who are indifferent over such outrages – these dozens of innocent citizens were all killed by ‘mistake’- the next wrong address could be yours. Occasionally, highly keyed up police kill one another in the confusion caused by stun grenades.

Growth of Paramilitaries in the United States

The use of paramilitary police units began in Los Angeles in the 1960s (Attorney General Ed Meese) for the ‘war on drugs’. In 1988, Congress ordered the National Guard into the domestic drug war. In 1994, the Department of Defense issued a memorandum authorizing the transfer of military equipment and technology to state and local police, and Congress created a program “ to facilitate handing military gear over to civilian police agencies”.

Read all of it, with remarkable photographs, here.