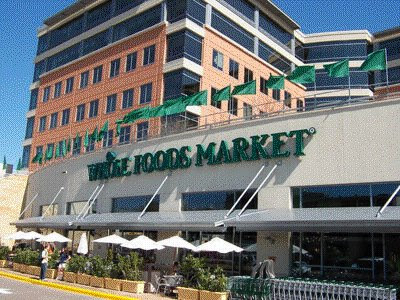 …something sinister lurks beneath the surface of Whole Foods’ progressive image. Somehow, [founder and CEO John] Mackey has managed to achieve multimillionaire status while his employees’ hourly wages have remained in the $8 to $13 range for two decades.

Whole Foods Market is a highly profitable corporation that far outperforms its competitors, while maintaining an aura of commitment to social justice and environmental responsibility. Its clientele is attracted not only to its brightly lit array of pristine fruits and vegetables, organically farmed meats, and delectable (yet healthy) recipes, but also to the notion that the mere act of shopping at Whole Foods is helping to change the world.

In 2007, Whole Foods launched its “Whole Trade Guarantee,” stating its aim as advancing the Fair Trade movement — encouraging higher wages and prices paid to farmers in poor countries while promoting environmentally safe practices. In addition, Whole Foods announced that one percent of proceeds will be turned over to its own Whole Planet Foundation, which supports micro-loans to entrepreneurs in developing countries.

Meanwhile, the company’s Animal Compassion Foundation seeks to improve living conditions for farm animals, while stores periodically hold “5 Percent Days,” when they donate five percent of sales for that day to an area non-profit or educational organization.

Whole Foods also has a distinctive reputation for rejecting traditional corporate management models in favor of decentralized decision-making, described as an experiment in workplace democracy. There are no departments at Whole Foods stores, only “Teams” of employees. And Whole Foods has no managerial job titles, just Team Leaders and Assistant Team Leaders.

Nor does the company admit to having any workers, only Team Members who meet regularly to decide everything from local suppliers to who should get hired onto the Team. Generally, the company strives to achieve consensus at Team meetings, where workers brainstorm about new ways to raise productivity. And new hires need to win the votes of at least two-thirds of Team Members in order to make the cut.

The liberal dress code at Whole Foods allows nose rings, Mohawks, visible tattoos and other expressions of individuality to help promote its stated goal of “Team Member Happiness” for its relatively young workforce. Each Team takes regular expeditions, known as “Team Builds,” to local farms or other enterprises to educate themselves on how to better serve their customers.

When Team Members show extra effort on the job, Team Leaders award them with “High Fives” that can be used to enter an onsite raffle to win a gift card. When a Team Member gets fired, it is sadly announced as a “separation.”

For all its decentralization, the “unique culture” so beholden to Whole Foods’ supporters bears the distinct stamp of its cofounder and CEO, John Mackey, who declared in 1992, a year after Whole Foods went public, “We’re creating an organization based on love instead of fear.

The former hippie is known for shunning suits and ties and wearing shorts and hiking boots to meetings — and for insisting that before the end of every business meeting, everyone says something nice about everyone else in a round of “appreciations.” In a 2004 Fast Company article, business writer Charles Fishman favorably quoted a former Whole Foods executive calling Mackey an “anarchist” for his eccentric executive style.

But something sinister lurks beneath the surface of Whole Foods’ progressive image. Somehow, Mackey has managed to achieve multimillionaire status while his employees’ hourly wages have remained in the $8 to $13 range for two decades. With an annual turnover rate of 25 percent, the vast majority of workers last no more than four years and thus rarely manage to achieve anything approaching seniority and the higher wages that would accompany it. If Whole Foods’ workers are younger than the competitions’, that is the intention.

But another secret to Whole Foods’ success is its shockingly high prices. When Wal-Mart began promoting its own organic products last year, Whole Foods’ Southwest regional president Michael Besancon scoffed at the notion that Wal-Mart could present serious competition. “There’s no way in the world that we’d win a price battle with Wal-Mart,” he told the Rocky Mountain News. “I’m relatively smarter than that.”

On the contrary, Whole Foods orients to a higher income clientele willing to pay significantly more for somewhat higher quality foods. Whereas the average supermarket chain’s profits traditionally hover at around one percent, Whole Foods was able to sustain a profit margin of three percent for 14 years after it went public in 1992. After hitting a low of one percent in the economic downturn in late 2008, “now the margins are expanding again,” according to the Cabot Report’s investment adviser Mike Cintolo on April 26th.

Indeed, Mackey is no progressive, but rather a self-described libertarian in the tradition of the Cato Institute. He combines this with a strong dose of paternalism toward the company’s employees. Mackey complained about his unique dilemma at the helm of Whole Foods to fellow executives in an October 2004 speech: “I cofounded the company, so I’m like this father figure at Whole Foods. I’m this rich father figure and everybody’s pulling at me saying, ‘Daddy, daddy can we have this, can we have that, can we have this, can we have that?’ And I’m either like the kind, generous daddy or the mean, scrooge daddy who says ‘No.'”

Using a carrot and very large stick, Mackey managed to “convince” Whole Foods workers across the country to vote in 2004 to dramatically downgrade their own healthcare benefits by switching to a so-called “consumer-driven” health plan –- corporate double-speak for the high deductible/low coverage savings account plans preferred by profit-driven enterprises. As Mackey advised other executives in the same 2004 speech, “[I]f you want to set up a consumer-driven health plan, I strongly urge you not to put it as one option in a cafeteria plan, but to make it the only option.”

There have been setbacks for Mackey, to be sure. He suffered public humiliation in 2007 when he was exposed as having blogged under the false user name “rahodeb” — his wife’s name spelled in reverse — between 1999 and 2006 at online financial chat boards hosted by Yahoo.

For seven years, he backstabbed his rivals — including the Wild Oats franchise that Mackey later purchased as an addition to the Whole Foods Empire. The Wall Street Journal reported a typical post: “’Would Whole Foods buy (Wild Oats)? Almost surely not at current prices,’ rahodeb wrote. ‘What would they gain? (Their) locations are too small.’” At one point, rahodeb even admired Mackey’s latest haircut, gushing, “I think he looks cute!”

Preventing Whole Foods workers from unionizing has always been at the top of Mackey’s agenda, and the company has been successful thus far at crushing every attempt. Perhaps the company’s most notorious attack on workers’ right to unionize occurred in Madison, Wisconsin in 2002. Even after a majority of workers voted for the union, Whole Foods spent the next year canceling and stalling negotiation sessions — knowing that after a year, they could legally engineer a vote to decertify the union. Mission accomplished.

At the mere mention of the word “union,” Whole Foods still turns ferocious. Even when United Farm Workers activists turned up outside a Whole Foods store in Austin, Texas, where Mackey is based, the company called the police and had them arrested for the “crime” of passing out informational literature on their current grape boycott. And as Mother Jones recently reported, “An internal Whole Foods document listing ‘six strategic goals for Whole Foods Market to achieve by 201… includes a goal to remain ‘100% union-free.’”

Mackey launched a national anti-union offensive in January, in preparation for the (remote) possibility that President Barack Obama, upon his inauguration, would make it a legislative priority to pass the Employee Free Choice Act (EFCA), allowing workers to win unionization when a majority of a company’s workforce signs a union card. Although union card check is standard procedure in many countries, Mackey claimed to the Washington Post that it “violates a bedrock principle of American democracy” and has vowed to fight to prevent its passage here.

“Armed with those weapons,” Mackey argued, “you will see unionization sweep across the United States and set workplaces at war with each other. I do not think it would be a good thing.” Workers don’t want to join unions anymore, Mackey declared, contradicting every recent opinion poll: “That so few companies are unionized is not for a lack of trying but because [unions] are losing elections — workers aren’t choosing to have labor representation. I don’t feel things are worse off for labor today.”

In January, Whole Foods launched a nationwide campaign, requiring workers to attend “Union Awareness Training” complete with Power Point presentations. At the meetings, store leaders asserted, “Unions are deceptive, money hungry organizations who will say and do almost anything to ‘infiltrate’ and coerce employees into joining their ranks,” according to Whole Foods workers who attended one such meeting.

“According to store leadership,” the workers continued, “since the mid 1980’s unions have been on decline because according to Whole Foods ‘theory’, federal and state legislation enacted to protect workers rights has eliminated the need in most industries (and especially Whole Foods stores) for union organization… No need to disrupt the great ‘culture’ that would shrivel up and die if the company become unionized.”

When rumors recently began circulating that a union drive might be brewing in San Francisco, the response from the company was immediate — including mandatory “Morale Meetings” to dissuade employees. But company leaders failed to address workers’ complaints that they have gone without any pay raises sometimes for more than two years because Team Leaders have neglected to hold “Job Dialogue” meetings (known as “annual performance reviews” in traditional corporate-speak).

There was a time in decades past when liberalism was defined in part by its principled defense of the right to collective bargaining. That liberal tradition was buried by the market-driven neoliberal agenda over the last three decades, allowing companies like Whole Foods to posture as progressive organizations when their corporate policies are based upon violating one of the most basic of civil rights: the right of workers to organize and bargain collectively. Indeed, Whole Foods has ridden its progressive image to absorb its smaller competitors and emerge as a corporate giant.

As the Texas Observer argued recently, “People shop at Whole Foods not just because it offers organic produce and natural foods, but because it claims to run its business in a way that demonstrates a genuine concern for the community, the environment, and the ‘whole planet,’ in the words of its motto. In reality, Whole Foods has gone on a corporate feeding frenzy in recent years, swallowing rival retailers across the country… The expansion is driven by a simple and lucrative business strategy: high prices and low wages.”

Indeed, Whole Foods now stands as the second largest anti-union retailer in the U.S., beaten only by Wal-Mart. Most of Whole Foods’ loyal clientele certainly would –- and should — shudder at the comparison.

[Sharon Smith is the author of Women and Socialism and Subterranean Fire: a History of Working-Class Radicalism in the United States. She can be reached at: sharon@internationalsocialist.org.]