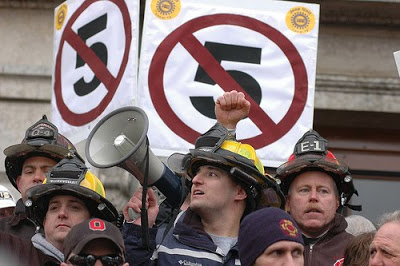 But a counterattack centered on one or more statewide initiatives or constitutional amendments has become highly likely.

While thousands of protesters chanted, spoke and sang inside and outside the statehouse for the past two weeks, the Ohio Senate voted 17-16 on Senate Bill 5, a bill that will slash collective bargaining for state workers by banning strikes and giving local officials the right to settle disputes. The bill, among other things, also eliminates all paid sick days for teachers.

The vote came amid shouts of “shame on you” and widespread booing from the diverse crowd of teachers, police, firefighters, construction workers, state employees, and more.

The bill decimates a legal framework in place since 1983. The vote was surprisingly close as six Republicans joined 10 Democrats in opposition. The 17 yes voters were all Republicans.

In order to vote the bill out of committee, Republican Senate president Tom Niehaus had to remove two key Republican senators who opposed the bill from crucial committees. Both Senators Scott Oelslager of Canton and Bill Seitz of Cincinnati were yanked from their posts. The removal of Seitz broke a committee stalemate and allowed the bill to come to the floor with a 7-5 vote.

Ultraconservative Senator Timothy Grendell of rural Chesterland, Ohio denounced the bill as”unconstitutional” pointing out that it prohibits union members from talking with elected public officials during negotiations and labels such activity as an unfair labor practice. Seitz echoed this theme: “It’s an unfair labor practice if they exercise their First Amendment right to call up their councilman.”

The bill now goes to the Ohio House, where it is fast-tracked and anticipated to pass by mid-March. In the House, the passage is being orchestrated by House Speaker Bill Batchelder. The Free Press has reported in the past of Batchelder’s ties to the secretive Council for National Policy.

The Democrats do not hold enough seats in either house to deny the GOP a quorum, as is being done in Wisconsin and Indiana.

Ohio’s multimillonaire Governor John Kasich, who got rich selling junk assets to public pensions in Ohio as a managing partner for Lehman Brothers , will sign the bill as soon as he gets it. Kasich is a former Fox news commentator who was elected last November with a large last-minute contribution from Rupert Murdoch.

Kasich has blamed budget problems on state workers. But a rich person’s repeal of Ohio’s estate tax has cost the state a long-standing multimillion-dollar revenue stream. Like Governor Scott Walker of Wisconsin, Kasich also has rejected a big federal grant ($400 million) to upgrade the state’s passenger rail system, which would have created at least a thousand direct jobs and thousands more indirectly, along with a jump in state tax revenue.

Kasich meanwhile has given his chief of staff a substantial pay hike over that of his predecessor. He has hired at least four commissioners to sit on a “job creation” panel with annual salaries of roughly $150,000 each. The commission has been structured to operate without formal accountability to the legislature or taxpayers of the state. Kasich has already succeeded in privatizing the state’s department of development.

Kasich tried to ban the media and the public from his inauguration. He has warned opponents that they had better “get on the bus or get run over by the bus.”

Unlike Wisconsin, Ohio has no recall law. The only apparent route to overturning this union-busting legislation may be with a statewide initiative or a constitutional amendment. As the statehouse filled with union protestors, talk spread of how and when that might be done.

Polls are showing overwhelming support for public workers, in part due to the blatant attack on Ohio’s police and firefighters who are now barred from negotiating on safety issues. The bill bans binding arbitration used in the past to settle negotiations, and instead allows management to pick the settlement it wants.

Ohioans may also consider a constitutional amendment to guarantee hand-counted paper ballots. Electronic voting is dominated here by the successor to the Ohio-based Diebold corporation and the ES&S corporation, and other Republican-controlled voting machine companies. The privatization of Ohio’s voting and voter registration rolls corresponded with a 5.4% shift to the Republican Party not predicted by the exit polls in the 2010 election. Exit polls showed Kasich losing the election.

Overall the architectural map of the Ohio election system appears to give private voting companies contracted to the Secretary of State’s office — currently headed by John Husted, a Republican — the ability to electronically select state office winners in a matter of a few minutes on election night.

Husted has already introduced legislation to restrict voting rights through demands for photo ID and other measures aimed at students, the elderly, poor, and other Democratic-leaning citizens. Without universal voter registration and hand-counted paper ballots, the Ohio Democratic party has little chance of winning statewide office for the foreseeable future, or of turning back legislative union busting.

Key to the national corporate strategy now playing itself out in Ohio is the destruction of the Democratic Party’s traditional base. It is also about trashing teachers, firefighters, police, and other citizens who choose to work for the general good rather than individual profit. As Nina Turner, a Senate Democrat told The New York Times, “This bill seeks to vilify our public employees and turn what used to be the virtue of public service into a crime.”

It’s widely believed Kasich will next assault Ohio’s pubic school system, whose funding mechanisms have been repeatedly ruled unconstitutional by state courts. Kasich is a cheerleader for private charter schools. The GOP is expected to push a voucher program that would use taxpayer money to subsidize private schools for the rich.

David Brennan, owner of White Hat Management, a chain of private charter schools, has consistently been the leading donor to the Ohio Republican candidates. Former Ohio Attorney General Richard Cordray filed a legal complaint against Brennan alleging that “White Hat’s management agreements with the schools are invalid because the public charter schools handed over nearly all funding — 96 percent — to White Hat and were given essentially no accountability or transparency as to how the funds were spent.”

Kasich and the GOP have already moved to gut environmental regulations and turn the state’s park system over to corporate extractors. He is also expected to attack legislation mandating advances in renewable energy while pushing for a new nuclear plant to be built in southern Ohio by corporations poised to cash in on massive federal subsidies being proposed by President Obama.

While the mood of demonstrators yesterday at the statehouse was angry and defiant, there are no illusions about the stakes in this battle. Governor Kasich and his wholly owned Republican legislature are born of unlimited Citizens United corporate cash and rigged electronic voting machines.

It’s thus no surprise that the first serious blood drawn in this latest corporate campaigns to finally wipe labor unions off the American map has come in the Buckeye State.

The question now: can the unions effectively fight back, in Ohio and nationwide?