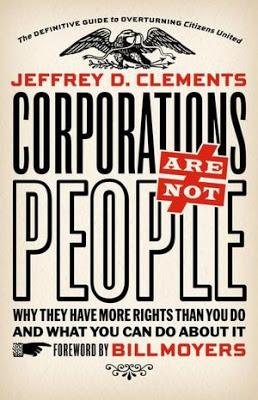 And money is not speech:
‘Corporations Are Not People’

Most Americans don’t realize that the idea that “corporations are people” and “money is speech” are concepts that were never, ever considered or promoted or even passed by any legislature in the history of America. Neither were they ever promoted or signed into law by any president — if anything, the opposite, with presidents from Grover Cleveland in 1887 to Barack Obama in 2010 condemning them.

And Congress and the executive branch are the two of the three branches of government that are elected by the people, and thus the only two to which the founders of this country and the framers of the Constitution gave the right to create laws.

The Supreme Court is so much not supposed to create law, that Article 3, Section 2 of the Constitution even says that it must operate “under such Regulations as the Congress shall make.”

Nonetheless, as I pointed out in 2001 in my book Unequal Protection: How Corporations Became People, the Supreme Court itself has invented, out of whole cloth, the doctrines of corporations as people and money as speech.

Now comes into our political milieu a new and significant contribution to the literature of “corporate personhood.” Jeff Clements, a former assistant attorney general for Massachusetts, has written a brilliant and very accessible guide to the 2010 US Supreme Court Citizens United decision, how it came about and what can be done about it.

Most interestingly, Jeff’s book also tracks the rise of corporate power over the past 40 years since Lewis Powell wrote his infamous memo to his friend and neighbor, who was the head of the U.S. Chamber of Commerce — which led to everything from the Federalist Society to the Heritage Foundation.

Clements suggests that the modern revival of the doctrine of corporate personhood, which first appeared back in 1819 in the Dartmouth case, reached its 19th-century zenith with a misunderstood Santa Clara County, California, decision. It came into full flower in 2010 with the Citizens United ruling, which was, in fact, a direct child of that 1973 memo by Powell and subsequent corporate and Republican implementation of his recommendations.

“Corporations Are Not People” is accessible, readable, and fascinating. It’s the book you want to hand to your co-worker or brother-in-law when they start spouting corporate drivel that they heard from Limbaugh or Romney. It’s a nice, tight summary of the modern application of this doctrine, with a quick overview of its history, particularly its contemporary implications.

With his friend and colleague John Bonifaz, he’s co-founded freespeechforpeople.org — one of a half-dozen or so very accessible and well-done efforts to build grassroots support for a constitutional amendment that repudiates the notion that corporations are people and that money is speech.

As the movement grows to take back our rights under the Constitution from the transnational corporations that have hijacked them (and taken our legislators captive), Corporations Are Not People (with a foreword by Bill Moyers) will become an increasingly important handbook to the movement. It brilliantly makes the case for us all to recite the mantra, “Corporations are not people, and money is not speech!” and then to do something about it.

Corporations Are Not People is this week’s “Progressive Pick” at Truthout. Make a donation (a great cause) and receive a copy.

[Thom Hartmann is a New York Times bestselling Project Censored Award winning author and host of a nationally syndicated progressive radio talk show. You can learn more about Thom Hartmann at his website. This article was published at and distributed by Truthout.]