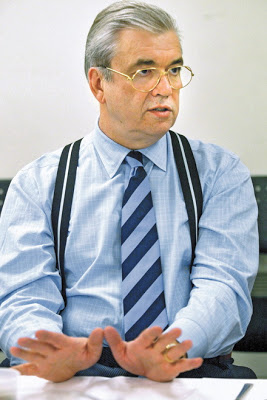 One wonders just what motivates these [Republican] clowns. One could conjecture that it is an abiding, almost religious faith in the philosophy of Leo Strauss, or the economic diktat of Milton Friedman, or one could assume this is purely a product of the baksheesh received from the Wall Street bankers, the defense contractors, the pharmaceutical industry, the medical appliance makers or the insurance companies.

Frequently of late it seems that CNN provides an inordinate amount of time for the Republican Congressional Leadership to vilify the president’s attempts to care for the poor, the helpless and the infirm. As I watch these folks babbling away I am reminded of a comment that Mark Twain wrote in the New York Tribune on March 10, 1873: “I never think of Judas Iscariot without losing my temper. To my mind Judas Iscariot was nothing but a low, mean, premature Congressman.”

One wonders just what motivates these clowns. One could conjecture that it is an abiding, almost religious faith in the philosophy of Leo Strauss, or the economic diktat of Milton Friedman, or one could assume this is purely a product of the baksheesh received from the Wall Street bankers, the defense contractors, the pharmaceutical industry, the medical appliance makers or the insurance companies.

Whatever the thinking, which is opposed to the well-being of the populace at large, it well may destroy the opportunity to establish a health care system here in the United States of the quality inherent in Canada, Australia or Europe. As I have noted previously, passing such legislation, especially in the Senate, is indeed a long shot without concerted, fearless action on the part of we who believe in the rights of the people to be provided with a much better option, than profit driven system now crushing our citizens.

Perhaps as Kate Loving Shenk noted in OpEd News, Feb.18, 2009, Washington currently may not be the right venue for single payer passage, and grassroots support may be more likely to be effective if done on a state by state basis. It is noted that Cong. John Conyers, who orchestrated HR 676, is now putting his energy into state sponsored single payer bills. He will be coming to Pennsylvania, Massachusetts and Ohio to help these states with their single payer initiatives. Let us keep in mind that the Canadian Healthcare System began in Saskatchewan in 1962, and then went national a year later,

Here in Pennsylvania a Quinnipac Survey taken in May, 2008, showed that 68% of Pennsylvanians supported single payer legislation. With so many folks out of work one can assume that the support currently will be even higher.

Healthcare For All PA has 8000 members from all walks of life; nurses, doctors, medical and nursing students, Chambers of Commerce, League of Women Voters. Council of Churches, AFL-CIO, as well as Democrats, Republicans, Greens who support the bills. Pennsylvania Governor Ed Rendell, has said that he will sign the bill if the people will get it on his desk. It should be noted as well that on Feb. 18, Massachusetts Labor for Health Care, an organization associated with Jobs with Justice, wrote President Obama supporting HR 676, as the Massachusetts plan utilizing private insurance companies as written is failing as the insurers increase cost.

Back on the national front 14,000 Americans lose health care insurance every day. In the original Economic Recovery Package, recently signed by the President, the Democratic leadership had provided that the unemployed could sign up for COBRA and continue same until eligible for Medicare. This was stripped from the bill in an effort to compromise with the Republicans. Yet, even with the Democratic proposal there was a problem. The average unemployment benefit is $1278/month. COBRA for a family costs on average $1069/month. The Democratic compromise which provides COBRA for nine months provides a subsidy of 60% for that period… still very expensive in relation to the income.

Continuing to look at costs, let us peek into the salaries of the insurance company executives to see where our health insurance premiums are utilized. According to Families USA, the compensation, as of 2000: William McGuire (CEO of United HealthGroup), $54.1 Million; Wilson Tayler (Retired Chairman of CIGNA) $24.7 million; Ronald Williams (Executive VP, WellPoint) $13.2 million; William Donaldson (Chairman,Aetna) $12.7 million. These various folks also had unexercised stock options ranging from $64.6 million to $357.9 million.

Let us not stop there, as there are also the “non-profit” ‘Blues’. In 2007 Keneth Melani, CEO of Highmark (BC/BS Western Pa.) drew $2.97 million, while Joseph Frick (Independent Blue Cross, Philadelphia) drew $2.94 million. Robert Lufrano’s pay at Blue Cross/Blue Shield of Florida was $4.7 million. Daniel Loepp, BC/Bs Michigan drew $1,657,555. Perhaps in looking at medical costs any commission appointed by the president should look at the matter of tax free, “non-profit” corporations across the board including senior care facilities and nursing homes.

To continue this exercise in discovering where your health care dollar goes, let us look at the pharmaceutical industry. Remember how many commercials there are on TV for prescription medications? Keep in mind as well that the pharmaceutical companies spend more on marketing than on research. In any event, Fiercepharma.com, as of May 19, 2008, provides us with the following. Miles White, Abbot Laboratories, drew $33.4 million; Fred Hassan of Schering-Plough drew $30.1 million, Bill Weldon of Johnson and Johnson , 25.1 million, Bob Essner of Wyeth, $24.1 Million. The list goes on and on; however, the least poorly paid executives (and remember stock options and bonuses are not indicated, if any) are Werner Wenning of Bayer, $4.77 million; David Brennan of AstraZenka, $4.3 million; Gerard LeFur of Sanofi-Aventis, $3.27 million. One striking aside in view of the fact that almost all, if not all, pharmaceutical companies are multinationals, is the fact that the top salaries are paid in the United States, and the lesser ones in the European based companies.

For those interested in more detailed information on pharmaceutical salaries and profits I refer you here.

Our problems continue to multiply. In a recent article by Dr. Howard Dean that ran in the Huffington Post and also appeared The Rag Blog on Feb. 19, he points out that in the Recovery Package there is a section that has become a contention with the Repugs and the Radical Right. Dr. Dean writes:”At issue is something called “Comparative Effectiveness Research” which basically means giving your doctor access to the latest research on which treatments and therapies work and which don’t. It also helps doctors know which treatments are more expensive than others, and helps both patients and doctors decide if there is a cheaper treatment that is just as effective. As a doctor and the husband of a doctor, I know how important it is to have solid scientific research to make critical decisions for my patients. The research will help doctors choose the best treatment for each patient’s situation and help them make more informed choices rather than risk prescribing less effective or even potentially harmful treatments.”

The author, as a retired physician, wholeheartedly agrees. I worked a 10-12 hour day, which left precious little time form me to peruse the dozens of medical journals available. I would have been delighted to have a website to provide me supplement that research. However, to go ahead with Dr. Dean:

Medicine is and always should be science based-not driven by ideology. Mr Limbaugh and his cohorts would have you believe that this research will be used to deny needed care to your great Aunt May and be run by the politburo. I was surprised to see Sen Coburn (R-Ok) who is a doctor make a statement against medical research which in part stated ‘this bill lays the groundwork for a Soviet-style Federal Health Board that will put bureaucrats and politicians in charge of our nations health care system. Sadly, it seems that Sen. Coburn has his political hat on when he relies on Rush Limbaugh to ”help” his patients.

While quoting Dr. Dean, who I supported during his presidential primaries, and who was an outstanding chairman for the DNC, one wonders why he has been banished to outer darkness by the Obama White House advisers. Here, in my opinion, was an excellent candidate for the cabinet post at HHS, or Surgeon General. In passing I note that Dr. Ezekiel Emanuel, Rahm’s brother, as been tapped for White House Health Care Adviser. In reviewing Lynn Sweet’s article in the Chicago Sun-Times, Dr. Emanuel is a very capable physician, and Chair of The Department of Bioethics at The Clinical Center of the NIH and a breast oncologist.

I will refrain from repeating myself to those weary from my prior ramblings on The Rag Blog. There must be cost control in any national health program and, as I have noted, the initial steps are to rid the Medicare Fund of expenses such as Medicare Advantage (Humana, which owns hospitals, as well as running a “health care plan” advertises on TV constantly) and reworking of the Medicare prescription drug plan that is first and foremost a payoff to the insurance and pharmaceutical industries. One must read and implement the lengthy and detailed Robert Wood Johnson “Improving Quality and Achieving Equity, A Guide for Hospital Leaders.” This is available on the RWJ website.

Two final observations: In the Stimulus package there is protection provided for medical whistleblowers. A much needed protection for those folks with a conscience who wish to reveal malpractice or neglect by physicians, hospitals, nursing homes, etc. This is detailed in the Op-Ed News of February 16, 2009.

Finally, be alert to the attempt of a “grand bargain” being proposed by the governing elite to the Obama Administration to establish a commission to utilize the Social Security and Medicare Trust Funds to further pump money into failing banks. This is detailed in The Nation , The effort is being led by Peter Peterson, a Republican financier who made a fortune doing corporate takeover deals at Wall Streets Blackstone Group, and is the Daddy Warbucks of the “fiscal responsibility” crusade. He has campaigned for decades against the dangers old folks pose to the Republic. He is beloved by the mainstream media so expect to hear a lot about his endeavors on Fox News and CNN. He is starting a crusade among the young folks asking them to question why they should support the elderly via Social Security and Medicare.

With $2.8 billion at hand he can do a lot of distorted advertising via the public media.This deceit, is further addressed in an article by Robert Borosage & Bernie Horn in The Feb. 19 Campaign For Americas Future.

Two other thoughts from the past: Will Rogers, “The country has come to feel the same when Congress is in session as when the baby gets hold of a hammer.” Woodrow Wilson, “A conservative is a man who sits and thinks, mostly sits.”