FOX News Does it Again!! 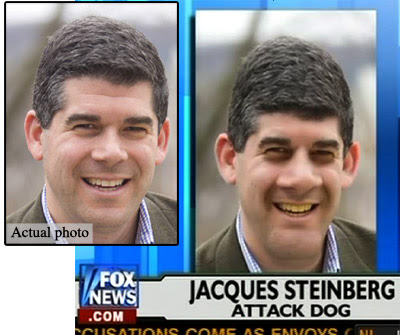 (Above)Screenshot of Fox & Friends featuring the photo it used of Jacques Steinberg, with the original photo on its left. Comparing the two photos, it appears that the following changes have been made: Steinberg’s teeth have been yellowed, his nose and chin widened, and his ears made to protrude further. / Media Matters.

NEW YORK — The Fox News channel has gained wide attention today in the blogosphere for airing photos of two New York Times staff that appear to have been doctored to portray the Times men in an unflattering light.

The photos depict New York Times reporter Jacques Steinberg with yellowed teeth, “his nose and chin widened, and his ears made to protrude further,” according to a statement today by Media Matters for America. The other image, of Times television editor Steven Reddicliffe, with similar yellow teeth, as well as “dark circles … under his eyes, and his hairline has been moved back,” according to the Media Matters statement.

The photos appear to have been flattened or extended using photoshop tools.

On Wednesday morning’s edition of Fox & Friends, co-hosts Steve Doocy and Brian Kilmeade aired the photos while discussing a piece in the June 28 edition of the New York Times. The piece pointed out what the newspaper called “ominous trends” in Fox News’ ratings.

Neither Steinberg nor Reddicliffe were reachable for comment Wednesday. But Times Culture Editor Sam Sifton called the Fox photo work “disgusting,” and the criticism of the paper’s reporting “a specious and meritless claim.” 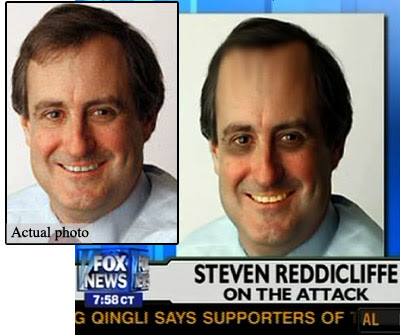 …a comparison of the photo of Reddicliffe used by Fox News and the original photo suggests that Reddicliffe’s teeth have been yellowed, dark circles have been added under his eyes, and his hairline has been moved back. / Media Matters.

“It wasn’t a hit piece,” Sifton told E&P. “It was straight news. This was a hit piece by Fox News. It is beneath comment.” Asked if the paper planned to respond to Fox’s actions, he said no: “It is fighting with a pig, everyone gets dirty and the pig likes it.”

In his TV spot, Doocy called the Times report, written by Steinberg, a “hit piece” ordered up by Reddicliffe. The pair then made reference to Reddicliffe’s tenure as editor of TV Guide owned by Fox News’ parent company, News Corporation, which ended in 2002. Reddicliffe was hired by the Times in 2004.

The anchors cited a brief item from the Web site of Radar magazine, quoting a blog called FTVLive, which stated that Reddicliffe “is still bitter about losing his gig at … TV Guide” and “sends his attack dog Jacques Steinberg out — that fellow right there, the writer for The New York Times — to do these hit pieces. So, he essentially is his attack dog. His — his poodle, if you will.”

As of this afternoon, neither Fox News or News Corp. had made a public statement on the matter

From the July 2 edition of Fox & Friends:

DOOCY: And before we go today, something’s been bugging me. A couple of days —

KILMEADE: Well, go back outside.

DOOCY: We will. A couple of days ago, when most newspapers in America were doing these positive stories about how Fox News Channel, once again, number one —

DOOCY: — for many, many years. There was a hit piece by somebody in The New York Times. The writer was a fellow by the name of Jacques Steinberg, and he’s been doing a bunch of attack stories on Fox News Channel. Well, there’s some backstory to it, and that is this: His boss, the guy who assigned him to this, is a fellow by the name of Steven Reddicliffe, and Mr. Reddicliffe actually used to work for this company. He worked — I think he was the editor in charge of TV Guide until circulation went down under his tenure —

DOOCY: — something like, 40 percent. So, he got fired, and according to Radar Online, this guy has had an ax to grind.

KILMEADE: Yeah, he does, because, I think, Steve, according to reports — according to Radar and another online magazine — he was making close to a million dollars here, and now with his new job —

KILMEADE: — he’s making significantly less. How about a tenth of that?

DOOCY: So, anyway, Radar says he’s had an ax to grind, and that’s why he sends his attack dog Jacques Steinberg out — that fellow right there, the writer for The New York Times — to do these hit pieces. So, he essentially is his attack dog. His — his poodle, if you will.

KILMEADE: — Radar Online has unlocked the mystery. And there you go, because that story was oddly in the Arts section of The New York Times, in the Sunday Times.

DOOCY: Anyway, we just thought we’d — cute. I wonder if he’s going to show him at Westminster this year.

KILMEADE: I’m not really sure. We know a beagle won last year, and this — he’s dressed as a poodle.