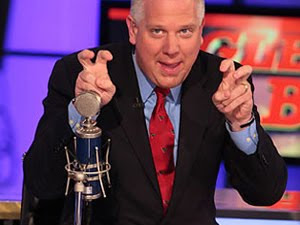 Glenn Beck of Fox “quote” News.
Fox and its enablers
In the mainstream media

Fox’s pretense of being an actual news network is hardly more convincing than, say, Milton Berle in a bra and garters posing as a woman.

It’s a sad symbol of the state of contemporary American journalism that the White House communications office is doing more to maintain the honor of the profession than are many journalists. But that’s just what’s happening in the contretemps over Fox News.

Interim White House communications director Anita Dunn has explained to the press that the White House plans to treat Fox “the way we would treat an opponent… As they are undertaking a war against Barack Obama and the White House, we don’t need to pretend that this is the way that legitimate news organizations behave.”

But many in Washington prefer to pretend. Howard Kurtz, whose talent for clueless conventional thinking is exceeded only by his ability to juggle his myriad conflicts of interest, thinks Obama’s reaction to Fox is no different from JFK’s complaints about the Herald Tribune, LBJ’s unhappiness with the New York Times and various (and endless) Republican attacks on the media, so he finds it “no surprise that the Obama White House isn’t happy with its coverage and is battling back.”

Baltimore Sun critic David Zurawik professes to hear “echoes of Nixon-Agnew” in the Obama White House and then accuses the administration of failing to “respect press freedom.” The Times’s David Carr concludes, “So far, the only winner in this latest dispute seems to be Fox News. Ratings are up 20 percent this year, and the network basked for a week in the antagonism of a sitting president.”

What all these critics fail to address is that the administration’s argument is right on the merits. Fox’s pretense of being an actual news network is hardly more convincing than, say, Milton Berle in a bra and garters posing as a woman. By refusing to acknowledge Fox’s open and avowed partisanship, its MSM defenders are not only flacking for Ailes & Co.; they’re diminishing the work of honest journalists who try to play fair. Ask yourself:

(Note: I have not had to quote the lunatic ravings of Messrs. Beck, Hannity or O’Reilly to make my case.)

Fox is not a news organization; it is a propaganda outlet, and an extremist one at that. Is it any wonder that according to survey after survey, Fox News viewers are among the worst informed Americans when it comes to politics, despite their obsessive interest?

A recent study by Democracy Corps finds that this audience believes “Obama is deliberately and ruthlessly advancing a ‘secret agenda’ to bankrupt our country and dramatically expand government control over all aspects of our daily lives,” with the ultimate goal of “the destruction of the United States as it was conceived by our founders and developed over the past 200 years.”

There is something to be said for collecting all the crazies in one place. As conservative pundit Reihan Salam argued on behalf of the nuttiness of Glenn Beck, his value lies in the fact that “he’s a kind of national therapist for some of America’s craziest people, few of whom are willing to go in for professional help.” And so it’s nice that ABC’s John Stossel has migrated to his natural home at Fox and Lou Dobbs is said to be in talks to take his racist rants over there as well.

But the danger increases when the rest of the media allow this particularly swine-ish flu to infect their news operations, and this is the White House’s legitimate concern. Why was George Stephanopoulos taking up valuable time in his interview with the President of the United States badgering him about ACORN? (“George, this is not the biggest issue facing the country. It’s not something I’m paying a lot of attention to,” was Obama’s entirely appropriate response.)

And why did Stephanopoulos persistently pester the president, in the same interview, about whether a transformational reform of our dysfunctional healthcare system — which is on its way to eating up 20 percent of the entire GDP — could be reduced to the Republican-friendly sound bite “a tax increase”? (Is it surprising that the interview made its way into an RNC attack ad the very next week?)

Is the fear of Fox making its way through ABC’s corporate bloodstream? Recently David Axelrod appeared on Stephanopoulos’s program and schooled him on the stakes involved: “It’s really not news — it’s pushing a point of view. And… other news organizations like yours ought not to treat them that way.”

I suppose we can be grateful that Obama has not been asked lately about his flag pin; but it’s a sad day when our big media pooh-bahs need instruction on the values and responsibilities of their own profession by political operatives. No one’s asking to censor Fox, but a little shame and scorn ought to go a long way. This, thankfully, is one of the concurrent crises facing the profession that journalists can fix all by themselves, and perhaps restore a bit of their self-respect in the process.

[Eric Alterman is a Distinguished Professor of English, Brooklyn College, City University of New York, and Professor of Journalism at the CUNY Graduate School of Journalism. He is also “The Liberal Media” columnist for The Nation and a fellow of The Nation Institute, a senior fellow at the Center for American Progress in Washington, DC, where he writes and edits the “Think Again” column, and a senior fellow (since 1985) at the World Policy Institute. This article appears in the November 9, 2009, edition of The Nation.]