GOP : Whoops! There Goes the Firewall… 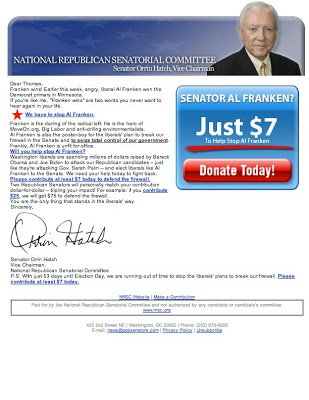 This is an update to an earlier article on Senator Orin Hatch’s frenetic September internet email plea for $7.00 donations to “defend the firewall!” Just two months ago, the Vice Chairman of the angst-ridden GOP Senators’ Club was mainly concerned that Al Franken would beat Norm Coleman in Minnesota. Now, Franken and Coleman are barely a couple hundred votes apart. A Statewide vote recount gets underway there shortly. Franken could win. Poor Senator Hatch is still digesting the cold, hard post-Nov. 4th election results which saw him lose a half dozen of his fellow Senators in a massive firewall breach. What’s a Senior Senator to do?

Since the early panicked pleas for money, here’s the firewall’s status: Six GOP senators have lost their places on the wall, falling off just like a bunch of Humpty Dumpties including a long-time Dumptyette, Liddy Dole. Three more GOP seats teeter precariously. Democrats now have 57 Senate seats. Three more wins for a true firewall-smashing majority of 60 votes is very possible.

They are still counting in Alaska in legendary incumbent and convicted felon, Senator Ted Steven’s race. At this writing with some 35,000 ballots left to count, Democratic challenger and Anchorage Mayor, Mark Begich, has the lead. Again, Al Franken has a good shot in Minnesota as the recount gets underway there.

And three’s a charm in Georgia. A December 2nd runoff is scheduled there between GOP incumbent, political hack Saxby Chambliss, and Democratic challenger, Jim Martin, an Atlanta attorney. In 2004, then Georgia Senator, Max Cleland, a triple amputee who was awarded the Silver Star for exceptional bravery in Vietnam was targeted by Chambliss and the GOP slimemeisters in a filthy Rove-style campaign of lies and denigration. The ever lovely Ann Coulter was Chambliss’ cheer leader savaging Cleland with her vapid vitrol. And the Senate Republicans are only worried about firewalls?

Looks like you should have asked for more than $7.00, Senator Hatch. More than money, your private senator’s club needed a dose of humility and a reality check. And that is just what you have just gotten. You might have also considered that your firewall was already being attacked from the inside by the excess weight of Senatorial hubris, greed, negativity and a massive overgrowth of moss in your midst.