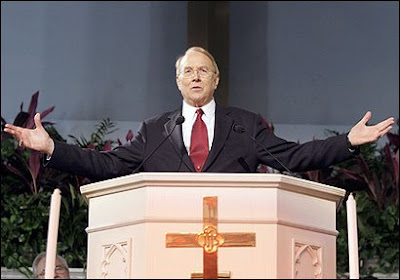 You tell me whar a man gits his corn pone, en I’ll tell you what his ’pinions is.

Mark Twain once said that “in matters concerning religion and politics a man’s reasoning powers are not above the monkey’s.” Now if the two are combined, as James Dobson’s right-wing Christian organization, Focus on the Family, did in their recent “Letter from 2012 in Obama’s America,” the bar has been lowered to somewhere between the reasoning power of the bacterium Clostridium botulinum, the most poisonous biological substance known, and that of George W. Bush … the most toxic presidential substance yet known [19 percent approval rating].

Dobson’s letter from the “future” was emailed on October 22 to millions of his weekly TV and radio audience in the United States. His purpose was to scare the bejesus out of corn pone connoisseurs who devour the stuff faster than even Jesus can multiply it.

Keep in mind that the targeted readers’ “reasoning power” has already convinced them that they’re going to be Raptured—swooshed up bodily [naked as a third-rate centerfold] into heaven—moments after they initiate an apocalyptic nuclear conflagration in the Middle East, which they hope will eventually engulf the entire world. This is not a one-derivation-above-the-mean crowd, after all.

“To create man was a fine and original idea; but to add the sheep was a tautology.” Thank you, Mr. Twain.

According to the letter, a phantasmagoria of horror begins shortly after Obama takes office. Shedding his centrist campaigning skin, he is transmogrified into a far left-wing liberal antichrist. Outlandish? Keep reading.

In his first week in office Obama fires all 93 U.S. attorneys and replaces them with radical ACLU lawyers. Consequently, the Justice Department initiates criminal proceedings against nearly every member of the Bush administration.

Due to death or retirement, the Supreme Court is taken over by far left-wing radical judges (6-3 majority) who—you guessed it—begin legislating from the bench. The youthful appointees are expected to rule the country for the next 30-40 years.

Same-sex marriage becomes the law and compulsory training in gender identity in elementary school results in the firing of tens of thousands of Christian teachers accused of hate speech for refusing to speak positively about homosexuality.

The Boy Scouts choose to disband rather than obey a Supreme Court decision ordering them to hire homosexual scoutmasters to sleep with young boys in tents.

The Bible can no longer be read on radio or TV because doing so amounts to hate speech, and students cannot pray in school … not even silently while sitting outside the principal’s office.

All federal restrictions on abortion are removed and babies are killed only seconds before they can be delivered. Doctors and nurses who refuse to “murder” babies lose their licenses.

Commander in Chief Obama proves to be a total wimp, which emboldens Taliban and Al Qaeda terrorists who eventually seize control of Iraq, imprisoning, torturing [imitation is the ultimate form of flattery] and putting to death millions of “American sympathizers” in that country.

Obama, it seems, is more interested in sending foreign aid to impoverished Third World countries in the form of food and medical aid, which does nothing but nourish and keep healthy the next generation of terrorists.

Dobson finally lets go of his tenuous grip on reality when he describes how Iran’s one nuclear missile destroys Tel Aviv and forces Israel to cede huge amounts of land to the Palestinians, leaving Israel defenseless. WHAT? Israel cede land? Israel defenseless?

“The trouble ain’t that there is too many fools, but that the lightening ain’t distributed right.” Thank you Mr. Twain.

Oh yeah, and gasoline costs $7 per gallon and only military personnel can own a gun.

Needless to say, the next four years are a living hell for the Dobson clan, much as the last eight years have been for anyone with reasoning power marginally superior to that of Twain’s pet monkey.

As a bona fide left-wing liberal atheist, who “wasted” a vote on Nader, I had mixed feelings reading Dobson’s half-baked corn pone. My initial reaction was something akin to enjoying a preposterously funny Twain satire. But then I began to get the creepy feeling I was reading an American fundamentalist version of the Nazis’1935 Nuremburg Laws, which disenfranchised German Jews and foreshadowed the murderous persecution of European Jewry.

It became clear that what I was actually reading was Focus on the Family’s back-handed glimpse of America under a ruler of their choice … say, for instance, Sarah Palin.

Win or lose this time around, Palin is the GOP’s rising star and James Dobson’s heartthrob. She’s the “real deal” of an End Times fundamentalist. Unlike President Bush—a suspected convert—she’s been stuffing her gob with apocalyptic corn pone her entire life. The only way for Palin to get to heaven with her admittedly appealing carcass intact is the Rapture route via an Armageddon avenue, which does not bode well for a survivable foreign policy.

It’s easy to poke fun at the corn pone Focus on the Family and like-mindless organizations dish out during an election. It stops being funny, however, when one realizes that for tens of millions of people this fare is their only sustenance, and this toxic repast, like the bacterium Clostridium botulinum, is the most poisonous of all substances to the body politic.

“If we would learn what the human race really is at bottom, we need only observe it in election times.” Thank you, Mr. Twain.

[Robert Weitzel is a contributing editor to Media With a Conscience. His essays regularly appear in The Capital Times in Madison, WI.]