Karl Rove’s Revolution : Senator Brown and the Myth of the Middle 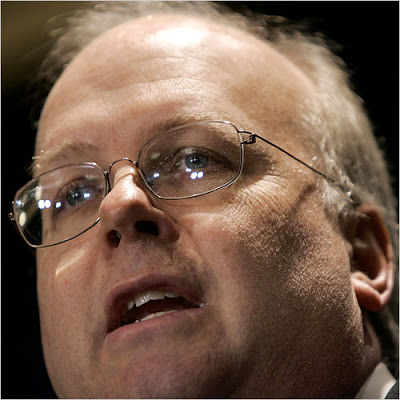 Republican strategist Karl Rove. Photo by Doug Mills / NYT.
The Rovian Revolution:
Why the Dems must learn from Massachusetts

Over the last 40 years, voter turnout has been steadily declining in the established democracies.[49] This trend has been significant in the United States, Western Europe, Japan and Latin America… During this same period, other forms of political participation have also declined, such as voluntary participation in political parties and the attendance of observers at town meetings.

The decline in voting has also accompanied a general decline in civic participation, such as church attendance, membership in professional, fraternal, and student societies, youth groups, and parent-teacher associations.[50] At the same time, some forms of participation have increased. People have become far more likely to participate in boycotts, demonstrations, and to donate to political campaigns.[51]

— from Wikipedia (on “Voter turnout / Trends in decreasing turnout”)

Karl Rove should be credited with fundamentally changing the electoral strategy of the Republican Party, thereby enabling them to win elections despite most Americans not supporting their positions on issues. In so doing, Rove has revolutionized American politics.

He recognized that the U.S. was a deteriorating democracy with close to the lowest levels of political involvement among all democracies. In such a historical situation you didn’t need the support of a majority of citizens to win elections. The largest contingent among the citizenry didn’t vote at all.

Rove also understood the myth of the middle: the illusion that appealing to the center was the correct strategy to win elections. This accepted truism of moderating positions to appeal to the center in general elections became false in a reduced and polarized electorate.

The modern electorate is not a bell curve with its greatest concentration at the center. The Rovian strategy emphasized base mobilization instead of appeals to a center that hardly existed. Like you and I, he knew almost no one whose vote typically vacillated between Democrats and Republicans.

Appeals designed primarily to mobilize the base are much more ideologically pure. The base mobilization strategy, in the context of a smaller and more highly polarized electorate, has hardened the Republican line and produced greater unity on the right, exemplified by their unanimous opposition to health care reform and other Obama initiatives.

Putting the deficiencies of Obama’s policy positions aside, he and the Democrats will lose elections until they recognize the changed nature of the electoral game and adopt a strategy focused on mobilizing their base.

In American history there have always been two major political parties. The Democratic-Republican configuration has been with us since 1860 and will is unlikely to change in the foreseeable future.

Having two dominant parties is virtually a law of physics given the winner-take-all nature of American elections. The rules of this game will not be changed by those who have succeeded under the existing rules. There will be no progressive third party except one designed to eventually be incorporated into a transformed Democratic Party. Hence, the essential prerequisite for progressives ever coming to power is to take over the Democratic Party.

But the existing Democratic Party is heavily corrupted by corporate money that will staunchly resist any change in electoral strategy that follows the Republican model of emphasizing mobilization of the base. Such a change would necessarily involve direct appeals to class interests, advocacy of seriously fighting climate change, ending American militarism, and the drug war, equal rights for gays and purposefully growing the public sector among many other progressive policy positions that are anathema to corporate Democrats.

Hence, the revolution must first take place within the Democratic Party, to overthrow and displace the corporate capitalist elements within the party. Forget compromise. That’s antiquated centrist thinking.

Unless the Democrats adopt a base mobilization strategy, they will lose. The election of Obama in 2008 was propelled primarily by the profound disgust engendered by George Bush that stigmatized and overwhelmed the Republican candidates. A cowed McCain largely abandoned the Rovian strategy and tried to pass himself off as a “maverick” Republican, i.e., having unpredictable moderate tendencies and being prone to compromise with Democrats.

McCain’s overtures to the center failed while Obama rallied a base ready to march. But since his election, Obama has pursued a determinedly centrist approach. It has probably already cost him his presidency and certainly will do so unless he reverses course dramatically. Since the election, the Republicans have solidified behind the Rovian approach and they are on the march.

The recent election in Massachusetts to replace Ted Kennedy in the U.S. Senate is a case in point and confirms the Rovian strategy. Scott Brown, the Republican, won 52 to 48 percent with 1,168,107 votes garnered because of or despite his unabashedly rightist positions. McCain lost Massachusetts in a “landslide” while earning 1,108,854 votes. Brown only exceeded McCain’s badly losing total by 5.3%. But he did rally his base and grew it marginally.

Meanwhile, the entitled and aristocratic Democrat Coakley received 1,058,682 votes. Compare that to Barack Obama’s 1,904,097 votes in Massachusetts in 2008 when the progressive base was motivated by a hope for genuine change.

Coakley’s total represents a decline of 44.4% from Obama’s total. The total vote declined over 26% compared to 2008. Those 850,000 or so votes that didn’t show up this time were the progressive base.

4 Responses to Karl Rove’s Revolution : Senator Brown and the Myth of the Middle