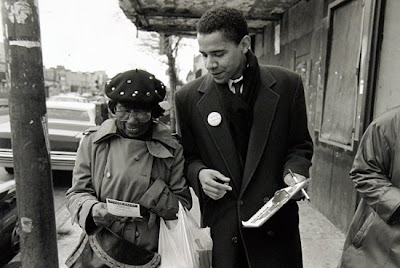 In structuring his presidential campaign, Obama adapted methods he learned as a community organizer in the streets of Chicago.

‘He has a narrow mandate for change, without any direction specified. What he’s doing now is moving on the most popular issues — the environment, health care, and the economy.’

If you’re anything like me, your inbox fills up daily with the cries and complaints of lefties. Just the mere mention of the names Hillary Clinton and Lawrence Summers alone conjure up a litany of horrendous right-wingers appointed to top level positions.

Betrayal is the name of the game.

But wait a second. Let’s talk about a few things:

* Obama is a very strategic thinker. He knew precisely what it would take to get elected and didn’t blow it. He used community organizing methods to mobilize a base consisting of many people who had never voted before or who regularly don’t vote. Few other candidates in my lifetime have taken this road, which is contrary to conventional political wisdom. (Paul Wellstone was a wonderful exception to the rule.) But he also knew that what he said had to basically play to the center to not be run over by the press, the Republicans, scare centrist and cross-over voters away. He made it.

So he has a narrow mandate for change, without any direction specified. What he’s doing now is moving on the most popular issues — the environment, health care, and the economy. He’ll be progressive on the environment because that has broad popular support; health care will be extended to children, then made universal, but the medical, pharmaceutical, and insurance corporations will stay in place, perhaps yielding some power; the economic agenda will stress stimulation from the bottom sometimes and handouts to the top at other times. It will be pragmatic — Summers is talking about the growth in income disparity as a significant problem. On foreign policy and the wars and the use of the military there will be no change at all. That’s what keeping Gates at the Pentagon and Clinton at State and not prosecuting the torturers is saying.

And never, never threaten the military budget. That will unite a huge majority of congress against him.

And I agree with this strategy. Anything else will court sure defeat. Move on the stuff you can to a small but significant extent, gain support and confidence. Leave the military alone because they’re way too powerful. For now, until enough momentum is raised. By the second or third year of this recession, when stimulus is needed at the bottom, people may begin to discuss cutting the military budget if security is being increased through diplomacy and application of nascent international law.

* Obama plays basketball. I’m not much of an athlete, barely know the game, but one thing I do know is that you have to be able to look like you’re doing one thing but do another. That’s why all these conservative appointments are important: the strategy is feint to the right, move left. Any other strategy invites sure defeat. It would be stupid to do otherwise in this environment.

* Look to the second level appointments. There’s a whole govt. in waiting that Podesta has at the Center for American Progress. They’re mostly progressives, I’m told (except in military and foreign policy). Cheney was extremely effective at controlling policy by putting his people in at second-level positions.

* Read Obama’s first book, “Dreams from My Father.” The second section is the story of his three years doing community organizing in Chicago. It’s some of the best writing on organizing I’ve ever seen. That’s all it’s about, the core of the book. Obama learned many lessons of strategy and patience. Then read the first section, on his family and growing up in Hawaii and Indonesia. No other president has ever had such intimate experience with class and race. The final section is about his trip to Kenya. No other president has ever had an understanding of not only race, but colonialism and neo-colonialism, even using the terms. It’s the whole story he tells of his African family and especially his father, a victim of neo-colonialism. As was his step-father in Indonesia.

This is no stupid guy. I haven’t read The Audacity of Hope yet, but I plan to soon. I am ashamed that it took me so long to read Obama’s books. Had any of the stupid Republicans read his books, they never could have said, “We don’t know who this guy is.” You know every thought he’s ever had.

Our job now is to organize both inside and outside the Demo party. There’s already a big battle in the Demo party at every level. Here in the New Mexico State Legislature, the progressives are challenging the conservative Dems for leadership; the same is true in Congress. If you can’t stand to work in the party, work on putting mass pressure on issues such as healthcare and jobs and the war from outside.

Here’s my mantra: “Let’s put this country on our shoulders and get to work.”

13 Responses to Mark Rudd : Let’s Get Smart About Obama