MEDIA / The Minnesota Recount and the Manufactured ‘Debacle’ 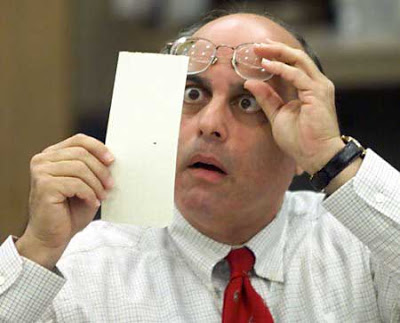 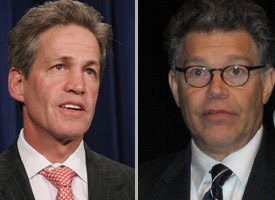 The news media’s tendency to compare any recount to the “butterfly ballots and hanging chads” made famous during Florida’s 2000 recount, and to breathlessly report the merest rumor of impropriety, is not merely lazy and absurd and sensationalist. It is also dangerous.

With only about 200 votes out of nearly 3 million cast separating Minnesota Sen. Norm Coleman and his Democratic challenger, Al Franken, the race is headed to a recount.

Naturally, conservative radio hosts are working themselves into a lather, baselessly accusing Democrats of trying to “steal” the election. That shouldn’t surprise anyone. But NBC and The New York Times have also pushed the dubious notion that the Minnesota recount has been plagued by chaos and impropriety.

Here’s how Meredith Vieira, co-host of NBC’s Today, began a report on the Minnesota recount: “If you thought the election debacle in Florida could never happen again, wait until you see the situation in Minnesota.”

The Minnesota Senate race is simply in the midst of a recount. Recounts happen. They aren’t the illegitimate, anything-goes street fights the media pretend they are; they are a part of how elections work, their process written into law and executed every year. They are necessary, for a perfectly obvious reason: They make it more likely that the candidate who receives the most votes takes office. That is an unequivocally good thing.

During that Today segment, reporter Lee Cowan announced that the situation “has some remembering shades of Florida, of butterfly ballots and hanging chads. There are neither of those here.”

What possible reason could there be for bringing up “butterfly ballots and hanging chads,” given that “there are neither of those” present in Minnesota? Whatever the intent, the effect is clear — it creates the impression that the situation in Minnesota is utter chaos, a “debacle” in the making.

Cowan continued: “Still, ballots have suddenly appeared out of nowhere, including some found unsecured in an election worker’s car.”

That appears to be completely false. Election officials have said the ballots did not “suddenly appear[] out of nowhere,” and they were not “unsecured.” The claim about unsecured ballots in a car appears to have originated with Norm Coleman’s lawyer. Cowan did not attribute the car story to anyone or anything, he simply asserted it as fact. Adopting and repeating Coleman’s lawyer’s claims as though they are facts is bad enough. What makes it worse is that the lawyer had already backed off the claim. Two full days before Cowan’s report, the Coleman lawyer had been quoted saying that “we’ve heard enough from the city attorney to let go of this. It does not appear that there was any ballot-tampering, and that was our concern.”

So Cowan offered a sensational and — by his own acknowledgement — wholly irrelevant comparison to the “butterfly ballots and hanging chads” of the 2000 recount. Then he made a false assertion of ballots materializing out of thin air, and of unsecured ballots — an assertion that seems to have been based entirely on the already-retracted claims of a Coleman campaign lawyer.

Vieira concluded the segment by referring to the “mess in Minnesota.” But there is no mess. There is simply a recount — a recount that does not involve butterfly ballots or hanging chads, a recount that, despite the best efforts of Vieira and Cowan to convince us otherwise, has not a thing in common with the “debacle” in Florida. Just a simple recount.

Today’s New York Times similarly promoted the idea of chaos and impropriety in the Minnesota recount — without actually providing any evidence or examples. The Times reported:

If Fritz Knaak has his way, Mr. Franken will never have a shot at solving those problems. A lawyer hired by Mr. Coleman expressly for the recount, Mr. Knaak described himself as “the new gun with the shiny pistol.” Citing suspicion over what he called a series of “shenanigans” that have narrowed Mr. Coleman’s lead, he has requested the official paper tape with the number of ballots and the time stamp printed out by each ballot machine, in every voting precinct.

Later in the article, the Times reported:

But there were no “assertions of ballot stuffing” — none the Times reported, anyway. The Times simply quoted Coleman’s campaign manager saying the Franken campaign’s request to reconsider previously rejected ballots is an indication of “desperation.” That’s quite different from making an allegation of “ballot stuffing.”

Then the Times reported that Minneapolis Star Tribune columnist Katherine Kersten expressed concerns about the ability of Minnesota’s Democratic secretary of state, Mark Ritchie, to act impartially during the recount, without indicating Kersten’s own political leanings. As Media Matters Senior Fellow Eric Boehlert explained, “Kersten is a right-winger who smeared Franken right before Election Day as a ‘slanderer of Christianity.’ “

Next, the Times quoted a “Republican researcher” who is “very, very concerned” about Ritchie. Then it quoted Sean Hannity saying “[f]ishy business” is occurring in Minnesota, where Democrats and elections officials are “up to no good.” To what “[f]ishy business” was Hannity referring? Were his allegations legitimate? The Times did not say.

Finally, the Times quoted the Facebook status of “Noah Rouen, 34,” a Minnesota man on a pheasant hunt who, along with his friends, “could not help but hatch a conspiracy theory.”

If it seems the Times is desperate to find people concerned about the legitimacy of the Minnesota recount — resorting to quoting vague allegations from hard-right partisans like Sean Hannity and Facebook conspiracy theories — maybe that’s because Tim Pawlenty, Minnesota’s Republican governor, says there is “no actual evidence that there’s been any fraud or problems.” (That quote didn’t appear in the Times article; maybe it got cut to make room for the pheasant hunter’s Facebook status.) And as Media Matters noted, the Times did not note that Pawlenty said that the bipartisan state canvassing board Ritchie appointed to oversee the recount was “fair” and that a lawyer for Coleman’s campaign reportedly said that the “state should feel good about who’s on the panel.”

The news media’s tendency to compare any recount to the “butterfly ballots and hanging chads” made famous during Florida’s 2000 recount, and to breathlessly report the merest rumor of impropriety, is not merely lazy and absurd and sensationalist. It is also dangerous. It causes people to be frightened and concerned about all recounts — to be wary of the very concept of recounts. But recounts needn’t be like the “debacle” of 2000; in fact, they rarely are. They are far more frequently the best way to ensure that errors in counting do not result in the candidate who received fewer votes taking office. (Indeed, in 2004, a manual recount in the Washington governor’s race reversed the results of the initial Election Day tabulations and machine recount.) Sensational and baseless reporting like that produced this week by NBC and The New York Times runs the risk of undermining public confidence in an essential part of the democratic process.