Michael Moore : What’s So Heroic About Being Shot Down While Bombing Innocent Civilians? 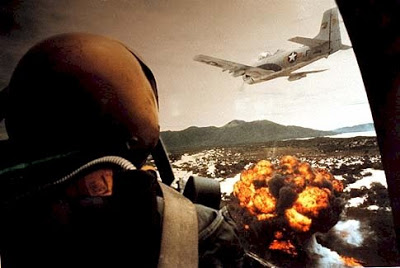 Bombing Vietnam: Operation Rolling Thunder, 1965. From video clip.
Like Iraq, Vietnam was not a noble cause. It’s time we stopped letting politicians and the press perpetuate the McCain War Hero myth.
By Liliana Segura

Confession: I have not yet read all six (short, illustrated, large type) chapters of Mike’s Election Guide 2008, Michael Moore’s, latest work of jaunty political opinion. Am I supposed to discuss it with him on “Meet the Bloggers” tomorrow? Yes. But I’m not worried. It’s a breezy read, has already made me laugh out loud, and besides, I may have already found the best part in Chapter One.

The title is “Ask Mike!” and, in it, ordinary voters, old and young, pose questions about politics and current events. Some are more serious than others (“If Iran has weapons of mass destruction, we should invade, right?”), which does not make Moore’s answers any more subtle. (“Excuuuuuse me? Did you say the words, ‘weapons of mass destruction?’ Take it back. I SAID TAKE IT BACK!”) Of course, the “questions” are really satirical jabs at the media — “When a Republican wears a little American flag lapel pin, what is he trying to say?” “If Obama can’t bowl, can he govern?” — but there’s one in particular that is worth paying attention to — especially if you happen to be a member of the press and have been utterly unwilling to take McCain’s supporters and opponents alike to task for perpetuating a narrative that would be central to a McCain victory, and which has already become a dominant theme in this election: The McCain as War Hero canard.

The “question” is posted thusly:

“Why did the Vietnamese shoot down John McCain and put him in prison for five years? He seems like such a nice guy.”

ANSWER: I’m guessing, in spite of his anger management issues, he is a nice guy. He has devoted his life to this country. He was willing to make the ultimate sacrifice in the defense of our nation. And for that, he was tortured and then imprisoned in a North Vietnamese POW camp for nearly five-and-a-half years.

That’s the set-up. It gets better. Moore proceeds, not to question, as Wesley Clark recently did to so many shrieks of criticism, whether McCain’s capture really makes him qualified to be president of the United States — the answer, any thinking person realizes, is “no” — but whether the Vietnam war was a conflict that can really be said to have produced the breed of “American hero” McCain is so often celebrated as.

“Sadly,” he writes, “McCain’s sacrifice had nothing to do with protecting the United States. He was sent to Vietnam along with hundreds of thousands of others in an attempt to prop up what was essentially an American colony, South Vietnam, which was being run by a dictator whom we installed.”

Lest we forget, the Vietnam War represented a mass slaughter by the United States government on a scale that sought to rival our genocide of the Native Americans. The U.S. Armed Forces killed more than two million civilians in Vietnam (and perhaps another million in Laos and Cambodia). The Vietnamese had done nothing to us. They had not bombed or invaded or even sought to murder a single American. President Johnson and the Pentagon lied to Congress in order to get a vote passed to put the war in full gear. Only two senators had the guts to vote “no.”

But the parallel between Iraq and Vietnam is not the only point Moore is making. He makes it personal.

John McCain flew 23 bombing missions over North Vietnam in a campaign called Operation Rolling Thunder. During this bombing campaign, which lasted for almost 44 months, U.S. forces flew 307,000 attack sorties, dropping 643,000 tons of bombs on North Vietnam (roughly the same tonnage dropped in the Pacific during all of World War II). Though the stated targets were factories, bridges, and power plants, thousands of bombs also fell on homes, schools, and hospitals. In the midst of the campaign, Defense Secretary Robert McNamara estimated that we were killing 1,000 civilians a week. That’s more than one 9/11 every single month — for 44 months.

What’s not heroic about that? Is it any wonder all politicians speaking in public about John McCain are required to preface their remarks with a fawning admiration for his war service?

Alas, McCain does have some regrets about Vietnam. As Moore points out, in his memoir Faith of Our Fathers, McCain called it “illogical” and “senseless” that he was limited to bombing only military targets.

“I do believe,” McCain wrote, “that had we taken the war to the North and made full, consistent use of air power in the North, we ultimately would have prevailed.”

In other words, McCain believes we could have won the Vietnam War had he been able to drop even more bombs.

When McCain was shot down, on October 26, 1967, he was busy bombing what he would describe as a “heavily populated part of Hanoi.”

What follows is a a rather entertaining passage in which Moore then asks what you would do to a man who “fell out of the sky” after dropping bombs on you or your children. But the most important question comes at the end:

John McCain is already using the Vietnam War in his political ads. In doing so, it makes not just what happened to him in Vietnam fair game for discussion, but also what he did to the Vietnamese … I would like to see one brave reporter during the election season ask this simple question of John McCain: “Is it morally right to drop bombs and missiles in a ‘heavily populated’ area where hundreds, if not thousands, of civilians will perish?”

Of course, no member of the “mainstream” media is going to ask John McCain that question. (And given his famous quips on “Bomb-bomb-bomb-ing Iran” or, when asked to comment on the U.S. exporting cigarettes to the country, on the speculation that “Maybe that’s a way of killing them,”, the answer may be too disturbing to bear.) Regardless, this is the same press that obligingly calls McCain a “maverick” and McCain’s campaign bus the “Straight-talk Express.” Going after his war hero credentials? Why, that would be … un-American.

Luckily, in the absence of an effective media — or one that takes its cues from Michael Moore — there are some people who are uniquely qualified to ask tough questions about the war hero John McCain, and they can’t all be considered “surrogates” for Barack Obama. One of them is a man named Phillip Butler, who, on AlterNet today, has an article whose point, really, is laid out in the title:

I Spent Years as a POW with John McCain, and His Finger Should Not Be Near the Red Button

Originally published on Military.com, it’s a scathing, point-by-point indictment of McCain that punctures the war hero mythology he has so successfully insulated himself in.

It is part fact-check (“Was he tortured for 5 years? No. He was subjected to torture and maltreatment during his first 2 years, from September of 1967 to September of 1969”), part much-needed perspective (“Because John’s father was the Naval Commander in the Pacific theater, he was exploited with TV interviews while wounded. These film clips have now been widely seen. But it must be known that many POW’s suffered similarly, not just John. And many were similarly exploited for political propaganda”). But perhaps its most compelling characteristic is that it is written by a former POW of a misbegotten war, who has seen the death and destruction firsthand, and who is fearful of what McCain would do as commander in chief. “I can verify that John has an infamous reputation for being a hot head. He has a quick and explosive temper that many have experienced first hand. Folks, quite honestly that is not the finger I want next to that red button.”

[Liliana Segura is a staff writer and editor of AlterNet’s Rights and Liberties and War on Iraq Special Coverage. Posted on AlterNet on August 21, 2008. This post originally appeared in PEEK’s blog.]

1 Response to Michael Moore : What’s So Heroic About Being Shot Down While Bombing Innocent Civilians?