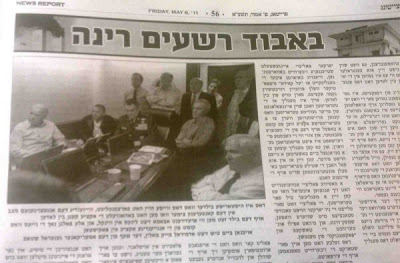 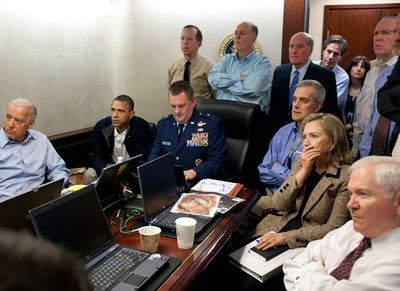 Above, the photoshopped Situation Room image, as it appears in the Hasidic paper, Der Tzitung. Below, the original photo, sexy Hilary and all.
‘I’m too sexy’:
Hasidic newspaper photoshops
Hilary from Situation Room pic

“For those who thought mainstream press was sexist. Hasidic newspaper Der Tzitung has photoshopped all the women out of one of the most iconic images of the decade: the national security team watching a live feed of the Osama bin Laden assassination.” — Personal Shoplifter

The religious paper never publishes pictures of women, as they could be considered “sexually suggestive.” Apparently the presence of a woman, any woman, being all womanly and sexy all over the United States’ counterterrorism efforts, was too much for the editors of Der Tzitung to handle.

(Audrey Thomason, the counterterrorism analyst seen peeking out from behind another onlooker in the back of the original photo, was also airbrushed away, due to all of the sexy man-tempting that her very presence in a photograph would cause.)

While saving precious vulnerable men from being driven mad with desire over the image of a woman may be in line with Der Tzitung‘s editors’ ideas of piety, Jewish Week‘s Rabbi Jason Miller points out that the altered image violates a central tenet of the faith,

Der Tzitung edited Hillary Clinton out of the photo, thereby changing history. To my mind, this act of censorship is actually a violation of the Jewish legal principle of g’neivat da’at (deceit).

[This article was first posted at Jezebel.]

This entry was posted in RagBlog and tagged Journalism, Orthodox Judaism, Sexism. Bookmark the permalink.