Questions About Who’s Getting the Bailout Bucks 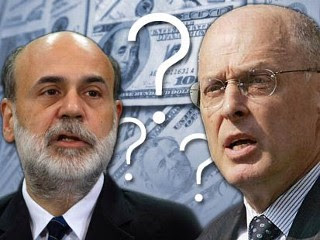 Federal Reserve Chairman Ben Bernanke and Treasury Department Secretary Henry Paulson are central figures in the government’s efforts to rescue the country’s financial system — efforts that, thus far, have aroused the concerns of critics concerned with the transparency of the government’s plans.
Government Rescue Spending: Clear or Cloudy?
By Alice Gomstyn / November 11, 2008

How much will the AIG bailout ultimately cost? What are the banks applying for the government’s $250 billion capital purchase plan? Who is the Federal Reserve lending to and how can taxpayers be assured they’ll get their money back?

Questions about on how and how much the Federal Reserve and the Treasury Department are spending taxpayer money to help save the country’s financial system.

After weeks of sometimes frenzied efforts by the federal government to rescue the financial system, and on the heels of the government’s latest move — the announcement of a new $40 billion infusion to the ailing insurance giant American International Group — critics say there are many questions but few answers about the work performed by the Treasury Department and the Federal Reserve.

“The bailout, the Treasury, the Federal Reserve — it’s like a three-card monte game, you don’t know where the money’s coming from, you don’t know who it’s going to, and I think the public has every right to be outraged by this,” said Bill Allison, a senior fellow at the Sunlight Foundation, a government transparency watchdog group.

Gerald O’Driscoll, a former vice president at the Federal Reserve Bank of Dallas and a senior fellow at the Cato Institute, a libertarian think tank, said he worried that the failure of the government to provide more information about its rescue spending could signal corruption.

“Nontransparency in government programs is always associated with corruption in other countries, so I don’t see why it wouldn’t be here,” he said.

Federal officials, however, have touted their commitment to transparency.

“We want to inform the public as much as possible about our operations, so we have posted an abundance of information on the Treasury Web site to allow everyone to have insight into our actions,” interim Assistant Treasury Secretary Neel Kashkari, the official in charge of the government’s $700 billion rescue package, said in remarks delivered at a securities summit Monday.

“Transparency will not only give the American people comfort in our execution, it will give the markets confidence in what form our action will take,” he said.

Federal Reserve Chairman Ben Bernanke last month noted the importance of transparency with respect to mortgage-backed securities, investment instruments that have played a key role in the country’s financial crisis.

But questions about transparency at the Federal Reserve, in particular, have prompted a lawsuit: Bloomberg L.P., which operates the news agency Bloomberg News, is suing the Fed for the release of information on its lending to private financial institutions.

The amount of money the Federal Reserve regularly lends to private institutions has increased exponentially since the start of the financial crisis and the creation of new Fed lending programs.

“We really don’t know anything,” Matthew Winkler, the editor-in-chief of Bloomberg News, told ABCNews.com. “All we know is something close to 2 trillion is being used and that money is the taxpayers’. … We don’t know whom it’s being lent to and for what purpose because we can’t see it because it isn’t disclosed.”

The Bloomberg lawsuit specifically requests information on what assets the Fed is taking as collateral in return for its loans. According to the Federal Reserve Web site, the Fed accepts collateral in the form of mortgage-backed securities along with other assets.

“Taxpayers are entitled to understand and assess the decisions by the Fed on the valuation of the collateral it accepts as security for public money being lent to private institutions,” the lawsuit states.

Supporters of the Fed’s work counter that it shouldn’t reveal the identities of the banks that borrow from it –- and, accordingly, what collateral they use -– because that could attach a stigma to borrowing from the Fed and could discourage the use of Fed lending facilities.

A Federal Reserve spokeswoman declined to offer comment on the suit.

While the Fed faces questions about its lending practices, the government as a whole is facing questions about whether its latest multibillion-dollar attempt to bolster AIG has even a remote chance for success.

Months earlier, the government had announced that the Federal Reserve would lend the troubled insurance company $85 billion. Later it announced it would lend an additional $37.8 billion.

The government said Monday that it was restructuring its AIG plan to include a total of $97.8 billion from the Federal Reserve and a $40 billion infusion from the Treasury Department. The Treasury Department would, in return, receive a stake in AIG in the form of preferred shares. The money for the government’s investment would come from the $700 billion financial rescue plan approved last month.

The problem, critics say, is that it’s unclear exactly how much money AIG actually needs because there is no certainty about how much the insurance giant will ultimately lose as a result of its credit default swaps — insurance contracts that kick in when investments such as mortgage-backed securities fail.

“Not only do people not understand what’s on the books, it’s impossible to put a fair valuation on them,” said Barry Ritholtz, the author of “Bailout Nation: How Easy Money Corrupted Wall Street and Shook the World Economy” and the CEO of the institutional research firm Fusion IQ.

Critics question whether the government will have to provide even more money to AIG.

Brookly McLaughlin, a spokeswoman for the Treasury Department, said she wouldn’t speculate on whether the recently-restructured AIG package was enough.

But, she said, “we think that the steps taken today are important to giving them a more sustainable capital structure and helping them to be better able to execute their asset disposition.”

Which Banks Get the Bucks

Under the government’s $700 billion rescue package, $250 billion is supposed to be allocated directly to banks.

By infusing banks with capital, the program aims “to increase the flow of financing to businesses and consumers to support our economy,” Kashkari said at the securities summit.

The Treasury last month named nine big banks that would receive funding through the program –- known as the Capital Purchase Program –- and how much money each would receive. (A list is available here.) Kashkari said Monday that hundreds of other financial institutions have applied for the funds and that “a number of them” had been granted preliminary approval.

But the Treasury isn’t revealing which banks have applied and which have received preliminary approval. McLaughlin said that the department would only provide information on banks that have already received money from the program.

When “everything is finalized, that’s when it’s appropriate to post that information,” she said.

Some say the Treasury should be disclosing the names of the institutions that have applied for its help.

“I think that any time you’re asking for money from the government, it should be a matter of public record,” Allison said.

Will the Government Lose Money?

Still, others, including O’Driscoll, say they understand why the Treasury would want to guard such information.

“It’s legitimate to say, ‘If we tell you everybody who needs money, all it’s going to do is cause a run on the banks, and that defeats the purpose,'” O’Driscoll said.

Deborah Lucas, a finance professor at Kellogg School of Management at Northwestern University, said her gripe about the Treasury Department’s disclosure practices revolved around the true value of the Treasury’s investments in banks participating in the Capital Purchase Program.

In return for its investments in banks, the Treasury is receiving preferred shares in the banks.

In a statement issued last month, Treasury Secretary Henry Paulsen said the program was “an investment, not an expenditure” and said there was “no reason to expect this program will cost taxpayers anything.”

But Lucas said that the market rate for the shares is lower than what the Treasury is paying for them.

Under fair value accounting principles, Lucas said, the Treasury should be reporting the actual value of its stakes in the bank –- but it’s not.

“I think that they were trying to do things very quickly because they felt there was a crisis so that was sort of an excuse to not look too closely at how much things are really costing,” she said.

Asked about Lucas’ concern, the Treasury Department did not immediately provide a response.